Is Alzheimer’s caused by disruptions to the brain’s energy supply?

It is well known that Alzheimer’s disease, the most common form of dementia, involves the accumulation of sticky proteins (plaques and tangles) in the brain. But we still don’t know what the root cause of the disease is. Given that someone, somewhere in the world, is diagnosed with dementia every three seconds, there is an urgent race to discover the causes of the disease so that treatments can be developed.

Scientists know that changes to the brain’s blood flow happen before plaques and tangles appear and this has led to an interesting theory of the causes of the disease, known as the vascular hypothesis.

When brain cells become active, they need energy in the form of glucose and oxygen, which is delivered by an increase in blood supply to that part of the brain. But in Alzheimer’s disease the blood supply is often impaired, so the amount of energy supplied to the brain cells is compromised. One of the reasons for the breakdown in this energy supply may be explained by a breakdown in the blood-brain barrier.

Capillaries in the brain are lined with very tightly packed endothelial cells that form a semi-permeable barrier. They let oxygen, glucose and other necessary substances across the barrier, but stop larger molecules from crossing into the brain. Research has shown that in people with Alzheimer’s, the integrity of this barrier is compromised due to gaps forming in the usually tightly packed endothelial cells. This leads to a build-up of harmful molecules in the brain, which in turn results in swelling of the brain and reduced blood flow in it.

A lack of oxygen to the brain (a condition known as “hypoxia”) has been shown to lessen the ability of neurons to fire and to alter brain chemistry. This causes brain swelling, lesions and, importantly, helps the formation of beta-amyloid plaques and tau tangles – the hallmark features of Alzheimer’s. So the degeneration of these blood vessels in the brain may form a vicious cycle, eventually resulting in mass cell death.

The role of the APOE gene

Another hint that Alzheimer’s disease may be caused by poor blood flow to the brain comes from genetics. 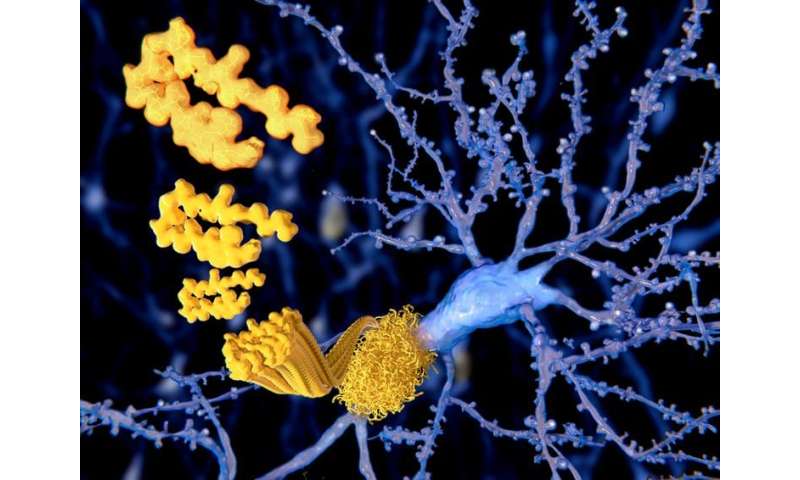 The gene associated with the highest risk of developing Alzheimer’s disease later in life is called APOE. Everyone inherits two copies of this gene, one from each parent, and APOE exists in three variants (alleles), called e2, e3 and e4. People with two copies of the e4 variant of the gene (“APOE4”) increase their risk of developing Alzheimer’s disease by about three to five times.

Researchers from John Hopkins University showed that people with the APOE4 gene had reduced brain blood flow, without any symptoms of Alzheimer’s disease. And a separate study, using genetically engineered mice with the human APOE genes, showed that APOE4 resulted in damage to the capillaries before any decline in brain-cell activity became evident. These findings support the idea that blood flow disruptions may be one of the earliest changes in Alzheimer’s disease.

A vascular theory of Alzheimer’s disease may also explain why people who have high blood pressure, or who have had a stroke, are more likely to develop the disease. High blood pressure can cause blood clots to form in the arteries leading to your brain, which reduces blood flow and oxygenation.

A stroke may occur as a result of such blood clots, meaning the blood supply to a part of the brain is suddenly cut off. Both of these conditions decrease the energy supply to the brain, which can damage brain cells significantly.

We need a different target

There are no cures for Alzheimer’s disease, only drugs to manage some of the symptoms. The new treatments that are being investigated tend to focus on removing plaques, which may or may not recover function. But perhaps a better target for drug developers would be medicines that treat changes to the blood vessels, before brain cells are affected.

In a 2012 study, published in Nature, researchers at the University of Rochester gave an immunosuppressant drug called cyclosporine to mice with the human APOE4 gene. They showed that, following this treatment, the early damage to capillaries and the blood-brain barrier were recovered. Clearly, genetically modified mice are not the same as humans, but the findings do lend further support to the vascular hypothesis.