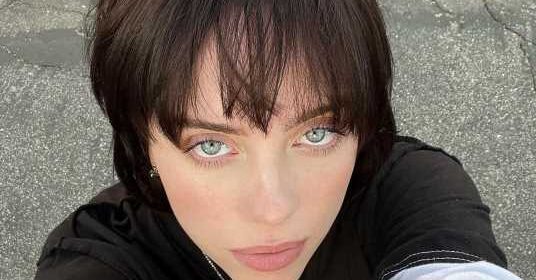 In the last year alone, Billie Eilish has had quite a hair journey. Second only to her popular music, the "Bad Guy" singer arguably became best known for her bright neon green roots that faded into a jet black shade. But in March 2021, her black and neon green ‘do was no more: she ushered in a new era with bright blonde hair. As we're all preparing to leave 2021 behind us, Eilish came through with another switcharoo when, on December 2, she revealed that her hair is now a deep, chocolate brown color.

Eilish shared a selfie of the new chocolate brown hairdo with her almost 97 million fans on Instagram. Folks rushed to the comments to share their excitement with multiple users commenting "omg" and "yes." The new color looks gorgeous on the star, and it's so dark that it looks like it's only a shade or two from a deep black hue. Her eye-grazing bangs look as if they have been freshly cut and that choppy short cut that she has been rocking since August 2021 is still here and going strong.

Towards the end of 2020, Eilish promised fans that she would change her hair after her Apple TV+ documentary was released, and she's more than delivered. We're not too sure what inspired this new hair color change.  Perhaps she chose to change the color again in anticipation of her upcoming birthday on December 18? Maybe she just wanted something different, and was inspired by our prediction that "rich brown" will be one of the biggest hair color trends in 2022? It may take a bit for folks to adjust to the Sagitarrius singer having a hair color other than neon green or blonde, but if the comments on her post are any indication, fans are thrilled.