Scientists reanimate disembodied pigs’ brains – but for a human mind, it could be a living hell

Do you want to live forever? If so, there’s some good news. Or so it seems. For it appears that we may have taken a step closer to making immortality reality. In a recent meeting at the National Institutes of Health, Yale neuroscientist Nenad Sestan revealed that his team has successfully reanimated the brains of dead pigs recovered from a slaughterhouse. By pumping them with artificial blood using a system called BrainEx, they were able to bring them back to “life” for up to 36 hours.

Admittedly, the pigs’ brains did not regain consciousness, but Sestan acknowledged that restoring awareness is a possibility. Crucially, he also disclosed that the technique could work on primate brains (which includes humans), and that the brains could be kept alive indefinitely.

But could you really survive the death of your body? And would such an existence be worthwhile anyway? In fact, the answers to these questions are far from clear. So perhaps the news for those seeking life eternal isn’t so good after all. It certainly raises a whole host of worrying ethical questions.

Trapped inside your own mind

Even if your conscious brain were kept alive after your body had died, you would have to spend the foreseeable future as a disembodied “brain in a bucket”, locked away inside your own mind without access to the senses that allow us to experience and interact with the world and the inputs that our brains so crave. The knowledge and technology needed to implant your brain into a new body may be decades, if not centuries, away.

So in the best case scenario, you would be spending your life with only your own thoughts for company. Some have argued that even with a fully functional body, immortality would be tedious. With absolutely no contact with external reality, it might just be a living hell.

According to some, it is impossible for a disembodied brain to house anything like a normal human mind. Antonio Damasio, a philosopher and neuroscientist, has pointed out that in ordinary humans, brain and body are in constant interaction with each other. Every muscle, nerve, joint and organ is connected to the brain – and vast numbers of chemical and electrical signals go back and forth between them each and every second. Without this constant “feedback loop” between brain and body, Damasio argues, ordinary experiences and thought are simply not possible.

So what would it be like to be a disembodied brain? The truth is, nobody knows. But it is probable it would be worse than being simply tedious – it would likely be deeply disturbing. Experts have already warned that a man reportedly due to have the world’s first head transplant could suffer a terrible fate. They say his brain will be overwhelmed by the unfamiliar chemical and electrical signals sent to it by his new body, and it could send him mad. A disembodied brain would be likely to react similarly – but because it would be unable to signal its distress, or do anything to bring its suffering to an end, it would be even worse.

So, to end up as a disembodied human brain may well be to suffer a fate worse than death. 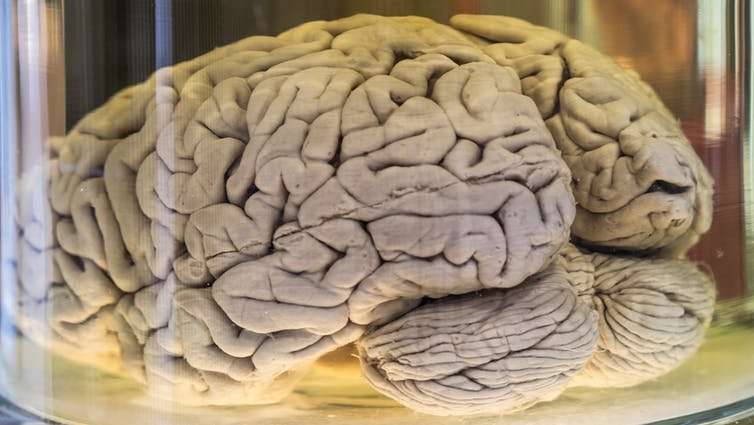 Would you even be you?

It is far from clear whether your disembodied brain would even be you. The question of when people die is the subject of ongoing philosophical debate as well as my own research. In a number of published papers, I have investigated this question and how it relates to what makes us who we are, how we persist over time, and what changes we can survive. Some working in this area think we are purely psychological beings, and so could survive as disembodied brains so long as our memories and personalities were preserved.

But according to one view, known as “animalism”, we are inseparable from our whole organism – our entire body, made up of cells, flesh, bone and organs. According to this philosophy, what makes us “us” dies when our whole organism dies – even if our brain survives. So, because you die when your body does, your brain cannot be you. And so even if it has the same personality and memories as you, it can only be, at best, a psychological duplicate of you.

But we should also be deeply concerned about the possibility of reanimating conscious human brains from an ethical standpoint. According to the dominant view in ethics, living human beings possess full moral status – that is, they are deserving of the highest possible degree of moral respect. They have such a status by virtue of possessing high-level psychological properties that are grounded in the capacities of the conscious human brain. And so, according to this view, irrespective of whether your disembodied conscious brain would be you, it would still be an entity with full moral status.