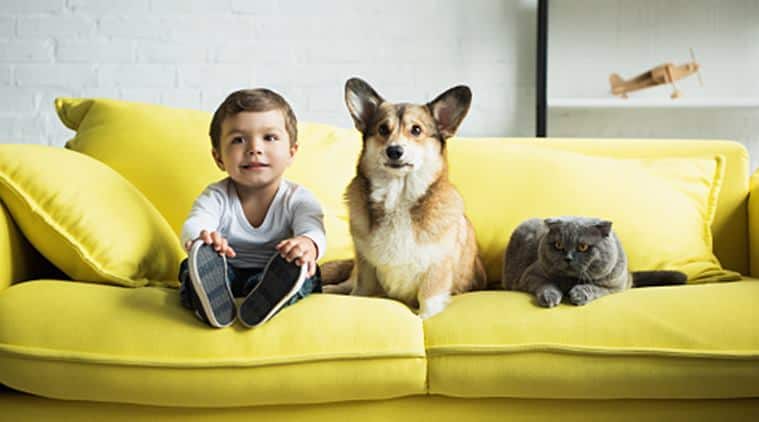 I am a dog lover and so is my daughter. She was very close to our pug while growing up and has never shied away from petting a friend’s dog (after asking if it’s okay, of course). Imagine our shock when she recently got bitten by a neighbour’s St Bernard. Not only was she sympathetic towards the dog even upon getting multiple bites and painful injections that followed, she saw logic in the unexpected behaviour of the dog.

It was made to stand in the balcony in unrelenting Delhi heat plus the help walking it had probably not been instructed to stand at a distance from the lift or to keep a tight hold on the leash. The sudden movement of the lift opening and someone stepping out may have startled it and so, it pounced. I’ve heard of similar stories from friends who’re frustrated that there are no laws to fine negligent dog owners and that their RWA can’t do a thing even if a particular dog is known to have bitten someone more than twice. So, how do dog lovers and concerned others find middle ground?

Meghna Menon, proud owner of a well-trained and friendly Golden Retriever, says, “Even though I know that my dog is harmless, I take precautions and put him on a leash while walking him. My brother has a Rottweiler that is as gentle as a Lab because of how well they treat him. You have to bring up a dog well from puppyhood, just like you’d bring up a child. People usually get a breed that’s ‘supposed to be aggressive’ and guard you, without really knowing how to treat them right. If you’ll always tie up a dog, they’re sure to become aggressive.”

She adds, “People should choose the breed after some research. If you choose a German Shepherd for example, you should know that they are a one-man breed. They’ll be friendly with the entire family but they’ll be particularly sensitive or possessive about that one person and any threat to their owner will not be received well.”

I myself had a German Shepherd and know that their physical strength is incredible. We had a trained dog-walker come to fetch him every day. I had raised him since he was a pup and was devastated when he passed away. But if he were a threat to other people, I would have taken all necessary precautions to make sure my neighbours were safe. One can find the right trainers or do research on how to make your dog sociable. These days, there are many dog-friendly farms where they can be taken out for a picnic or swim, or to run around and interact with other dogs. If you’re a dog-parent, you ought to do more than just feed and bathe them. Play is as important for dogs as it is for humans.

Precautions you can take

When dogs are socially well-adjusted, they are a great addition to the family. When you adopt one, not only are you responsible for their physical and psychological needs being met but also for making sure that they are well-behaved members of the community. Here are some things to consider:

1. Pick a breed that’s suited to the space where you choose to keep the pet. For example, don’t coop up an active dog like a German Shepherd in a small apartment. They need ample space to run around.

2. Make sure they’re cool and well-hydrated in the summer. Just like people, they can get bad-tempered due to the heat. Never leave them unattended in a parked car.

3. Make sure their outdoor space is contained for the sake of your neighbours’ safety. Put up ‘Beware of Dog’ signs so people don’t just walk in and alarm the dog. Most dogs bite only when they feel threatened.

4. Keep them on a tight leash and away from the door while waiting for an elevator. Sudden movements can unnerve them. Know your dog’s behaviour patterns so you can judge when they act aggressively. This way, you can keep them at a safe distance from delivery persons, strollers or whatever else they bark at. Leashing while walking them also ensures they don’t get run over by a vehicle.

5. Train your dog with positive reinforcement methods so it exercises self-control and obeys you. Even breeds that are so-called family dogs can attack viciously and if a dog bites once, it will likely bite again.

6. Make sure your pet is vaccinated as per the vet’s recommendation.

7. Ask your vet how to relieve anxiety in dogs around Diwali time. Their hearing is roughly seven times keener than us and loud explosions can put them on edge.

8. Inside your own home, don’t punish the dog for not being comfortable with your child’s or visiting childrens’ behaviour. Learn to decipher the dog’s body language. You’ll be able to tell if he’s not liking the excessive hugging and wants to left alone. Experts advise waiting till your youngest child is of school-going age before you get a dog. Teach kids to not try to play with a dog that is eating or feeding puppies, or one who has a toy, is sick or wounded. Nor should you sneak up on a dog.

9. Be aware of dog-related rules and regulations. In some buildings, the RWA decides on a time when the parks are accessible to pets. This is to avoid pets being teased by unsupervised children. If possible, educate your neighbours about canine behaviour so they too know how to behave with them.

10. Lastly, people who feed stray dogs should be discouraged from doing so in close vicinity to public spaces where children go to play.

According to the WHO, dogs are the source of the vast majority of human rabies deaths, contributing up to 99 per cent of all rabies transmissions to humans. India is endemic for rabies accounting for 36 per cent of the world’s deaths. About 30-60 per cent of reported rabies cases and deaths in India occur in children under the age of 15 years as bites that occur in children often go unrecognised and unreported.

Vaccinating dogs is the most cost-effective strategy for preventing rabies in people. The disease affects domestic and wild animals, and is spread to people through close contact with infectious saliva, via bites or scratches.

Children are playful and unafraid, and often approach dogs without fear of an attack. They may even conceal a bite wound from their parents for fear of being scolded. Often it is too late to save their lives by the time any symptoms appear. Teaching them how to avoid animal bites is an essential part of prevention of rabies.

Rabies is almost always fatal once the symptoms appear but is 100 per cent preventable through prompt and appropriate medical care. Early symptoms include fever, and often pain or an unusual tingling sensation around the wound. Thorough cleansing with soap and water and immunisation within a few hours after contact with a suspected rabid animal can prevent the onset of the disease.

If bitten, your doctor will administer a tetanus shot and a cell-culture-derived anti-rabies vaccine, doses of which need to be spaced out over several days, as specified on the vaccination chart. You’ll be prescribed antibiotics and painkillers, and an antibiotic ointment to apply on the wounds. It’s a good idea to take probiotics or B-complex capsules along with the strong medicines. Injuries may involve structures deep beneath the skin including muscles, bones, nerves, and blood vessels. Ice packs are recommended to alleviate the swelling and pain, and to prevent tissue damage. If a laceration looks worse after 24 hours, that’s a sign of infection and you need to treat it immediately.

Reassuring a child who’s been bitten

Dr Puneet Jain, clinical psychologist at Fortis Escorts advises, “A child who’s been bitten may get anxious around dogs in the future. Acknowledge the fear, talk about it and don’t demand toughness. Let him or her get around it at their own pace. Forcing your child to pet a dog he doesn’t want to, will only make him fear you and doubt himself. But avoidance of the feared animal comes with its own problems. The kid is actually avoiding the intense feelings (fight or flight response) that come with the fear.”

He explains, “As a parent, you too instinctively want to protect your child from those bad feelings. But that is just short-term relief. Avoidance can make things worse in the long run and keep the anxiety well-fed. It takes away the opportunity for kids to learn that whatever is worrying them most likely won’t happen again, and that if it does, they are resilient, strong and resourceful enough to cope.”

As a parent, don’t overreact and give a hug as a reward for brave behaviour. “Don’t encourage the generalisation that all dogs are scary because they can bite. Instead, explain that some dogs can be scary but most aren’t. Eventually, their response will shape towards a particular dog being okay because the owner has assured them that it’s a friendly dog who’s sitting calmly and other people are also petting it. Alternatively, you could read a storybook or watch a movie about a friendly dog, or buy a cuddly soft toy to help put the incident behind them.”