Selective neural connections can be reestablished in retina after injury, study finds 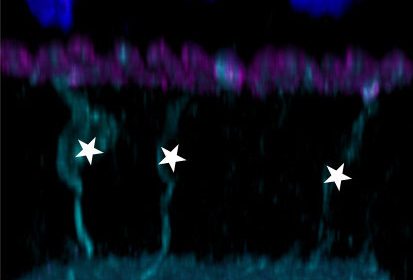 The brain’s ability to form new neural connections, called neuroplasticity, is crucial to recovery from some types of brain injury, but this process is hard to study and remains poorly understood. A new study of neural circuit repair in the retina shows that neurons can make new connections to the right types of photoreceptors to restore selective connectivity after an injury.

“It is essential to understand these processes because we don’t get new neurons in the central nervous system, and even if we learn how to introduce new neurons, we still need them to integrate in the correct way. Here we show there is a mechanism in adult mammals to ensure the correct connections are made,” said Alexander Sher, associate professor of physics at UC Santa Cruz and corresponding author of the new study, published May 24 in Current Biology.

“Our findings provide some hope that if new photoreceptors can be introduced and survive, the correct connections could be reestablished,” Sher said.

“It’s a nice trackable circuit, and people have developed antibodies we can use to label both S-cone photoreceptors and S-cone bipolar cells in the retina and see what happens if there is an injury that leaves bipolar cells with no input from a synaptic partner,” Sher said.

The researchers found that bipolar cells left without a connection to a photoreceptor start to grow new branches, called dendrites. As the new dendrites of S-cone bipolar cells randomly explore the retinal layer where synapses are made, they bypass any M-cones they encounter and only form new synapses with S-cones.

“This tells us that selective connectivity can be reestablished in an adult mammal, which had not been shown before,” Sher said. “How this might translate into other parts of the brain, we don’t know. But for the retina, it shows we might be able to make new connections after photoreceptors are lost.”