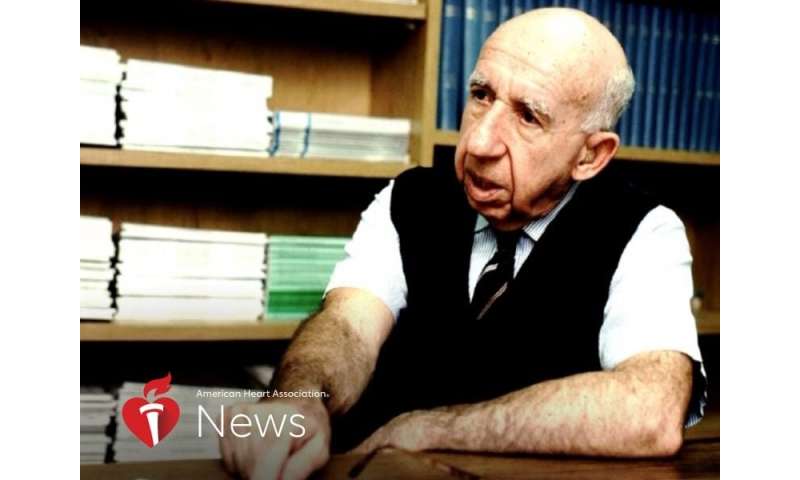 At 99 years old, most people are not engaging in complex research funded by the National Institutes of Health (NIH). Dr. Jeremiah Stamler is no ordinary person.

The author and co-author of hundreds of peer-reviewed studies and books, Stamler’s cutting-edge research into the cardiovascular health impact of lifestyle factors like diet, smoking, diabetes, cholesterol and blood pressure has been cited more than 25,000 times, and it has shaped public policy for decades.

“It’s very gratifying when I go into a supermarket and see a section of especially heart-healthy foods or a section of canned goods in which the usual salt content has been reduced or eliminated,” Stamler said. “The public is benefiting from the research.”

Born Oct. 27, 1919, Stamler today is considered the father of preventive cardiology. He joined Northwestern University’s department of medicine in 1958 as an assistant professor. In 1972, he became the first chair of the community health and preventive medicine department, a position he held for nearly two decades, ultimately becoming professor emeritus.

Over the years, he has served on numerous committees and lectured on cardiovascular disease prevention and treatment across the globe. He has mentored many young scientists, offering helpful tips about their research and career advice.

“What’s special about Jerry is that he truly loves what he’s doing,” said Dr. Donald Lloyd-Jones, chair of the department of preventive medicine at the Northwestern University Feinberg School of Medicine in Chicago. “There is always a glint in his eye, and every sentence ends with a little smile. He’s one of my heroes.”

There was a great deal of pushback about Stamler’s findings in the beginning, Lloyd-Jones said, particularly the landmark 1997 Intersalt study, which revealed the important link between salt intake and high blood pressure. That did not deter the scientist.

“These diseases were producing a lot of misery in the population,” Stamler said, noting that rates of smoking, diabetes and other risk factors increased in the years after World War II, resulting in an epidemic of heart disease. “To avoid these diseases, the optimal approach is preventive medicine.”

Stamler was just as determined in his showdown with the House on Un-American Activities Committee in the 1960s. Called to testify and identify friends who had attended communist party meetings, Stamler refused, ultimately suing the committee. The case went all the way to the U.S. Supreme Court, which decided in his favor.

“You can imagine the stresses and strains of going through this, being charged with contempt of Congress for several years, facing imprisonment and fines,” Lloyd-Jones said. “He put his career on the line to make sure the right thing was done. It’s quite remarkable, but it’s really just a measure of his character.”

According to Lloyd-Jones, Stamler’s work also has had a major impact on health outcomes worldwide, leading to far more screening and treatment. “As a result of Jerry’s work, there are many, many people who are now walking around who didn’t have a heart attack and die,” he said.

Not yet ready for retirement, Stamler is currently leading a team of about 20 people studying the link between high blood pressure and the metabolome, involving thousands of small molecules in the blood and urine. The study is funded by the NIH.

“You can imagine the extensive data analysis that needs to happen,” Lloyd-Jones said. “It is truly remarkable that somebody at age 99 has an R01 grant, the premier investigator-initiated grant. It’s highly competitive.”

Stamler also remains active as a mentor, spending hours in his Chicago condo reviewing manuscripts and advising young scientists on their careers. They will have a chance to honor him on Oct. 25, when Northwestern University hosts a scientific symposium followed by a dinner and personal tributes for Stamler’s 100th birthday.

“I’m sure it’ll be a great evening, and I’ll see a whole lot of people that I haven’t seen in a while, and that will be very pleasant,” Stamler said, noting that he hopes the event raises money for future research.

What keeps Stamler going at an age when the vast majority of people have long since retired?