It is well known by now that prisoners have a much higher prevalence of post-traumatic stress disorder (PTSD) than the general population, ranging from 4% to 21% of the sample. Many more females than males are affected by PTSD in prison. 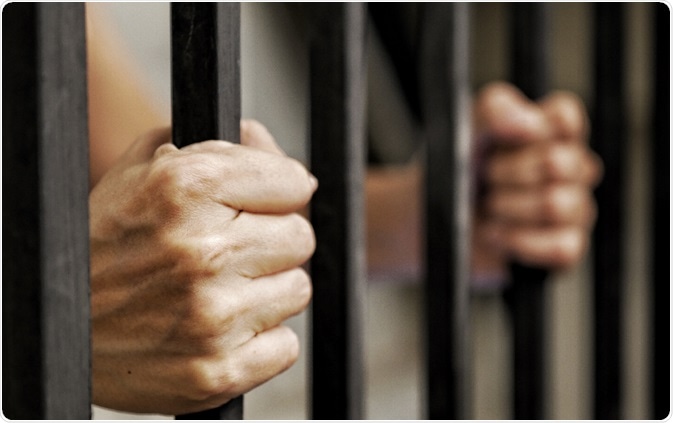 Trauma is almost ubiquitous among a male prison population, with rates of exposure to violence or traumatic events being reported as anywhere between about 62% to 100% – roughly double that in a community-based male population. This includes physical assault and sexual abuse, the latter affecting almost 15-16% of male prisoners in sharp contrast to the 1-3% in the general male population.

It is established that being exposed to trauma increases the link to psychiatric illness, and most importantly PTSD. This disorder is found to affect 5% of men in general, which is in turn about 7-14% of those who have undergone significant trauma.

However, it is noteworthy that no less than 60% of men in prison have symptoms and signs of severe to moderate PTSD, which reflects 30-60% of those who are exposed to physical trauma including assault, and 43-75% of men who were victims of sexual violence in prison.

The highest rates of PTSD occur in male prisoners who have any other mental health condition. These are horrifying statistics, especially in the light of the meager resources available to diagnose and treat this volume of male prisoners.

Prisoners are subject to various forms of trauma. Just being imprisoned is an extremely traumatic event for many prisoners, which may be responsible for precipitating PTSD following their release from detention.

Other factors are interwoven into the pathogenesis of this condition, including the many risk factors that underlie the behavioral and thought patterns of many criminals. These include childhood traumas such as extreme poverty, child abuse by their parents or caregivers, experiences of neglect, physical and sexual abuse, as well as other forms of mistreatment.

These extremely painful and devastating childhood memories may often be awakened when these offenders experience prison life, with its dehumanizing, harsh and unloving environment and lifestyle.

The violence that is rampant among many prisons in close proximity to uninvolved prisoners, along with the demands of obedience to a rigid and impersonal prison discipline and the need to escape from cruel or domineering co-prisoners, as well as the urgent necessity of not being a victim of rape or violence oneself, all conspire to produce an intolerable re-enactment of childhood memories which the prisoner would gladly forget.

These memories, by bringing back the earlier experiences, may cause the prisoner to go through the crippling mental and emotional reactions that they evoked earlier, as well as their painful consequences. Thus the stage is already set in many cases for the development of a full-fledged PTSD following incarceration.

Yet these are not revealed readily, especially under the training of a harsh and disciplined institution like a prison. They are internalized, instead, leading to outwardly well-adjusted individuals who are seething within with rage, frustration, disorganization, helplessness and fear. This causes them to eventually fail to adjust to the world outside prison.

This dysfunction is especially obvious when the prisoner does not have a support network upon returning to the free world. This means that there is nobody who can discover that something is wrong.

The internal conflict bursts to the surface when such individuals are faced by an overwhelming challenge, which acts like the proverbial straw on the camel’s back, leading to the fall of the external supports which sustained them so far and causing them to behave in unexpectedly destructive or abnormal fashion.

PTSD causes physical, emotional and behavioral symptoms. Early symptoms of PTSD may be classified as:

For the prisoner to deal with the PTSD, it is necessary to provide tools for the individual to understand the trauma in the right light. This will probably entail dealing with the background traumas as well.

Following this, it will be necessary to help such victims to deal with the avoidance, stress levels, depression, self-blame and anger which inevitably haunt them. Relaxation, breathing, and grounding techniques may all be taught to help in this process, along with psychotherapy and teaching coping skills. Medications may be necessary in some cases, and the prison staff must be involved for this process to be fruitful.