Autoimmune encephalitis (AIE) refers to a group of diseases with autoantibodies against various components of CNS neurons. These act against various neuronal processes and pathways, in different areas of the brain, and so they present in a diverse range of ways. 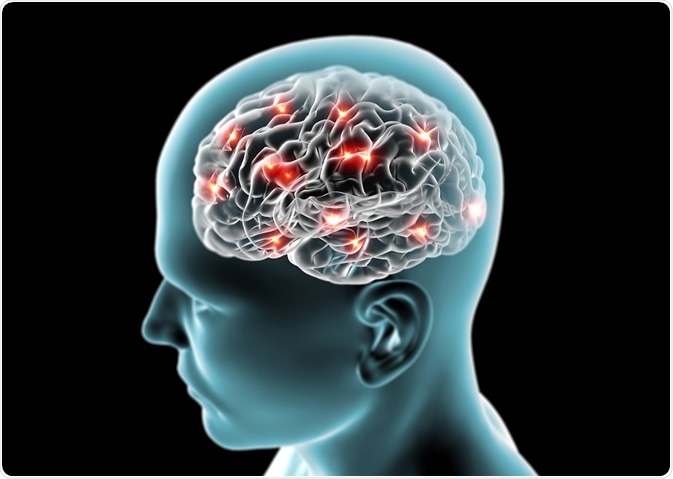 Several different groups of disorders have been diagnosed based upon the mechanism of disease. Firstly, there are the paraneoplastic disorders, which occur because of antibodies formed against intracellular antigens. They may also be termed encephalitis with onconeural antibodies or classical paraneoplastic neurological syndromes and were first thought to be relatively rare.

These disorders are always caused by an underlying cancer and the antibodies serve as markers to cytotoxic T cells that attack the marked neurons and they may be destroyed. This means that the prognosis for recovery is likely to be poor even with treatment, not only because of neuronal death but also because of the cancer and the lack of appropriate treatment for such aberrant immune reactions.

The prime example is the anti-Hu antibody, which is strongly associated with lymphomas. Others include anti-Yo, anti-Ri, amphiphysin, Ma2, and Tr. Associated tumors may include small cell carcinoma of the lung, Hodgkin’s lymphoma, thymoma, germ cell testicular tumors, neuroblastomas, breast cancer and ovarian teratoma.

Within the brain, these autoantibodies tend to congregate within the limbic system and produce marked inflammatory and then post inflammatory degeneration. These correlate with the increased T2-weighted hyperintense signals from such areas that are observed on MRI of the brain.

The second type of disorder is due to the formation of autoantibodies against antigens on the cell surface, like proteins such as cell surface receptors, ion channels, and NMDA receptors. Cancers are often but not always present.

In general, these antibodies themselves cause the clinical manifestations by disrupting synaptic processing in the affected neurons, but not causing neuronal destruction. The synaptic receptors are significantly reduced in the targeted nerve cells, by processes such as capping, crosslinking and internalization of the receptors (which occurs in anti-NMDAR encephalitis).

The antibody titer thus determines the extent of depletion of receptors. Removal of the antibody causes increased receptor function.

The prognosis is therefore quite good if proper treatment is available. Removal of the tumor is important to ensure a good recovery, which typically happens even from a seemingly end-stage condition in most patients with intensive support.

Some diseases of this type are not associated with such a clear mechanism, and complement-mediated neuronal attack may occur, as for instance in the VGKC-complex mediated AIE.

How these autoantibodies arise is a question being asked. It is thought that, to have such a direct effect on the neurons, the antibodies must be locally secreted by the brain and meninges, because of the high level of intrathecally synthesized antibodies with autopsy samples showing B-cells and plasma cells in the brain.

The tumor, if present, usually expresses the same antigen that is bound on the neuronal surface, and this is responsible for breaching the immunologic tolerance and raising an immune reaction against the neurons in question.

Another type comprises of the diseases which are caused by autoantibodies that target intracellular synaptic proteins such as GAD65. Both antibody-mediated cell destruction and T-cell mediated immunologic attack are suspected to be at work.

The last group consists of other autoimmune encephalitic disorders in which the antigens are not clearly known. Systemic manifestations may occur other than the CNS features. This group includes lupus cerebritis.

Antagonism of the NMDA receptors leads to deficits in cognitive, psychological and sensory processing. These are responsible for the catatonia, marked psychotic features, and orofacial dyskinetic movements suggestive of dopaminergic activity. The antibodies prevent the function of the NMDAR in GABA-secreting presynaptic neurons of the thalamus and frontal cortex.

This releases the postsynaptic glutamate-releasing neurons from inhibition, which triggers glutamate-dopamine imbalances in the frontal cortex. IgG antibodies to NMDAR occur in both serum and (more reliably) CSF in association with acute psychotic features in anti-NMDAR encephalitis.

Frontal and temporal lobe atrophy is prominent in this condition, which is suggestive because of the high density of NMDAR in this region of the brain. This supports the immunologic nature of the observed shrinkage.