A wide range of clinical trials have been conducted with the aim of improving our understanding of MS and developing a cure. 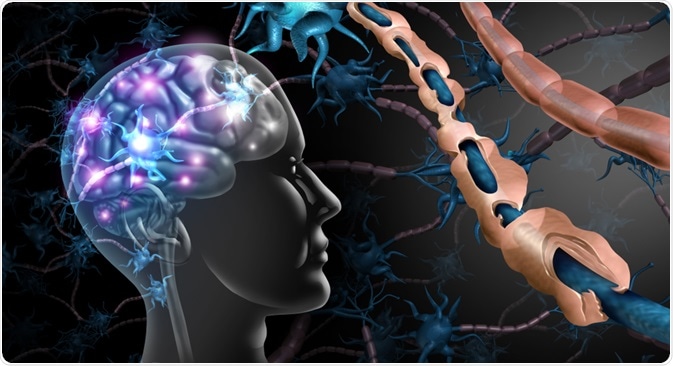 Research suggests that MS is caused by a genetic predisposition coupled with certain environmental factors; however, the exact cause of the condition remains a controversial topic.

It is thought that some cases of MS might be triggered following a viral or bacterial infection, in which the foreign agents have similar surface molecules to those of human brain cells. This is known as molecular mimicry and causes the immune cells of the body to start attacking the patient’s own cells.

In addition, damage to the blood-brain barrier, the layer which separates the brain and spinal cord from the immune system, allows immune cells to enter the CNS, thereby allowing access to the nerve cells, causing damage.

A genetic predisposition towards the disease has been identified. However, scientists found that as there is only a 33% possibility of both monozygotic twins having MS, therefore there must be other reasons influencing the disease.

It is now widely accepted that there are several genetic mutations that can lead to MS.

Studies have indicated that people exposed to an optimum amount of sunlight each day are less susceptible to MS. This may be because Vitamin D, which is produced in response to sunlight, stimulates the immune system in such a manner that it reduces the chances of MS.

Though the exact cause is not known; however, smokers have shown a high inclination to developing MS.

It has been suggested that individuals who have been infected by EBV during their lifetime might have a higher risk of developing MS.

Research on the plaques in the brain

MS is caused by inflammation in the brain that damages the protective myelin sheath. This process leaves plaques of dead neurons.

Advances in treating the episodes of multiple sclerosis

MS is a disease that has no permanent cure; however recent developments mean that medicines are now available which can reduce the intensity and extent of recurring episodes of MS.

The most widely used treatment for MS is steroids. However, the American Academy of Neurology recently introduced a technique known as plasmapheresis for the treatment of MS. 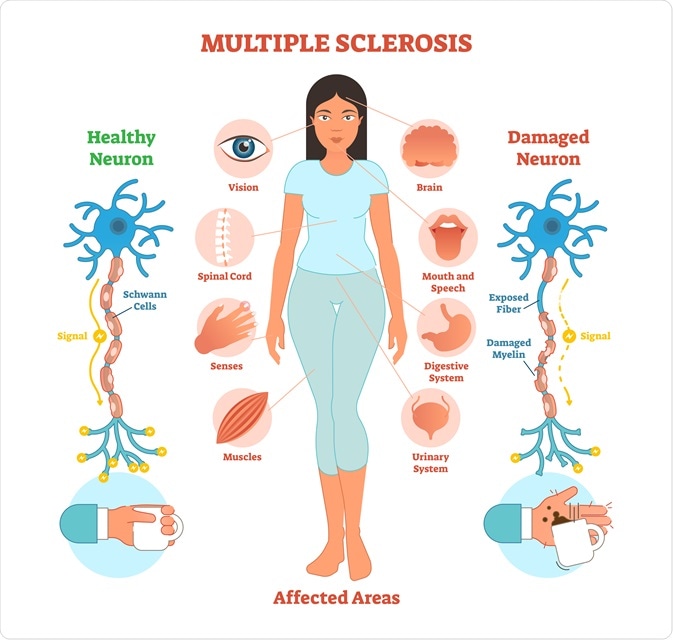 Infographic depicting the difference between a healthy neuron and the damaged neuron of a multiple sclerosis sufferer. Image Credit: VectorMine / Shutterstock.com

Advances in treating the disease action and advancement

Major advances have been made in the last two decades in treating MS, however, there is still no cure for the condition. In an effort to improve the quality of life for patients with MS, and find a cure, scientists are focusing on three main areas:

A clinical trial conducted at the University of Ottawa showed that treating the damaged immune system extensively with chemotherapeutic agents followed by stem cell therapy could stop MS. This approach was a major development for patients with MS and continues to be researched.

Akshima is a registered dentist and seasoned medical writer from Dharamshala, India. Akshima is actively involved in educating people about the importance of good dental health. She examines patients and lends free counseling sessions. Taking her passion for medical writing ahead, her aim is to educate the masses about the value of good oral health.