A new episode of our podcast, “Show Me the Science,” has been posted. In addition to reporting on the state of the COVID-19 pandemic, these episodes feature stories about groundbreaking research, as well as lifesaving and just plain cool work involving faculty, staff and students at the School of Medicine.

Brain-computer interfaces connect activity in the brain to an external device by means of a computer. Research has shown it’s possible to use such interfaces to move robotic arms and perform other tasks. Almost 30 years ago, Washington University researcher Eric Leuthardt, MD, a professor of neurosurgery, demonstrated that he could hook electrodes to the brains of epilepsy patients who were waiting to have brain surgery, and those patients then could play video games just by thinking about moving things on a screen. Over the years, Leuthardt’s team has learned to detect similar brain signals noninvasively. He co-founded the Washington University startup company Neurolutions Inc. to develop a brain-computer interface to help stroke patients recover function in their hands and arms.

In this episode, we learn about that device, known as the IpsiHand Upper Extremity Rehabilitation System. The IpsiHand involves a sort of cap that picks up brain signals from a stroke patient and transmits the signals to an exoskeleton fitted over the patient’s paralyzed hand. While wearing the system, patients think about moving the affected hand, and the IpsiHand translates that intention into actual hand movement. 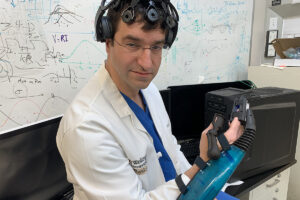 Over time, the patient’s brain slowly learns how to move the hand by itself. In addition to Leuthardt, we’ll also speak to a man who helped test an early version of the device years after a stroke left him unable to use his right hand. After working with the IpsiHand, the stroke patient, Mark Forrest, regained enough use of his right hand that he was able to build himself a boat. We’ll ride on that boat with him as he catches some fish and discusses his recovery.

The podcast, “Show Me the Science,” is produced by the Office of Medical Public Affairs at Washington University School of Medicine in St. Louis.