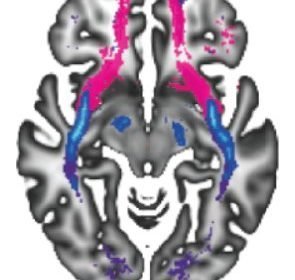 Adolescence is a period for individual growth and opportunities, but it also coincides with the emergence of many mental disorders. In a study that was recently published in JAMA Psychiatry, Norwegian researchers revealed that the pathways between brain regions are associated with early signs of mental illness in youth.

The researchers analyzed a wide range of clinical, cognitive, and genetic data from more than 6000 children and adolescents. They derived a score of general cognitive ability as well as early signs of psychiatric symptoms for each individual, and analyzed images of pathways in the brain of more than 700 of the participants using advanced machine learning techniques.

The study showed that the score of preclinical psychiatric symptoms was heritable and associated with disruption of specific pathways in the brain.

“We found that disruption of fiber tracts connecting brain regions involved in emotional regulation and complex cognitive behavior was linked to higher levels of psychiatric symptoms. Although follow-up studies are needed, this suggests that aberrant connections between specific brain regions present at a young age may be associated with increased susceptibility for mental illness later in life, says lead author Dag Alnæs.