Living with dementia, feeling lonely and isolated? MARIO the robot can help 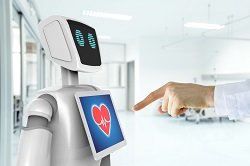 Dementia is a major cause of disability and dependency among older people worldwide, with about 50 million people suffering from it and nearly 10 million new cases every year, according to a fact sheet by the World Health Organization (WHO). Alzheimer’s disease is the most common form of dementia, representing about 60 percent to 80 percent of cases.

Dementia has a physical, psychological, social and economic impact on people living with it, their families and caregivers, as well as on society. It could lead to loneliness and isolation. To tackle these issues, researchers of the EU-funded MARIO project carried out a pilot testing of companion robot ‘MARIO Kompaï’ at three sites in Ireland, Italy and the United Kingdom for a period of over 12 months. Their tests showed that such service robots can have a positive influence on older people living with dementia.

Quoted in a press release by the NUI Galway that led the research, MARIO project coordinator Prof. Dympna Casey from the School of Nursing and Midwifery, said: “Human companionship is the best way of promoting social health but the reality is that our health care services do not have the resources to provide this service.” She added: “So we devised MARIO to be there for people living with dementia.”

The companion robot was developed by a consortium of experts from the healthcare sector, robotics industry and dementia groups. A key feature of the robot is its user-led design, with feedback from dementia sufferers in pilot trials.

Launched in February 2015, the three-year MARIO project combined expertise in robotics, semantic data analytics, artificial intelligence, speech and interactive touch screen technology, as well as healthcare and nursing knowledge. During the pilot studies that ended earlier this year, the robot interacted with older people with dementia and their caregivers. It enabled dementia sufferers to access newspapers, listen to their favourite songs, provide reminders of upcoming events and connect with their friends and families.

With populations ageing and the effectiveness of preventive strategies still unclear, the number of people suffering from dementia is expected to reach 82 million in 2030 and 152 million in 2050, according to WHO. Therefore, solutions such as MARIO are vital to improving the quality of life of people with dementia.

The MARIO (Managing active and healthy aging with use of caring service robots) project was set up to provide an interactive and extensible service robotics platform targeted towards healthy ageing. In addition to addressing the needs of people with dementia and their carers, it focused on supporting caregivers and physicians with comprehensive geriatric assessments.