Benefits of Nut Consumption During Pregnancy

Eating nuts during early pregnancy can improve a child’s neuropsychological development. It has been found that children whose mothers eat 2 – 3 ounces of nuts per week (an average of 74 grams per week) during the first trimester of pregnancy have better IQ, memory, and attention/concentration than their peers whose mothers do not eat nuts during pregnancy. 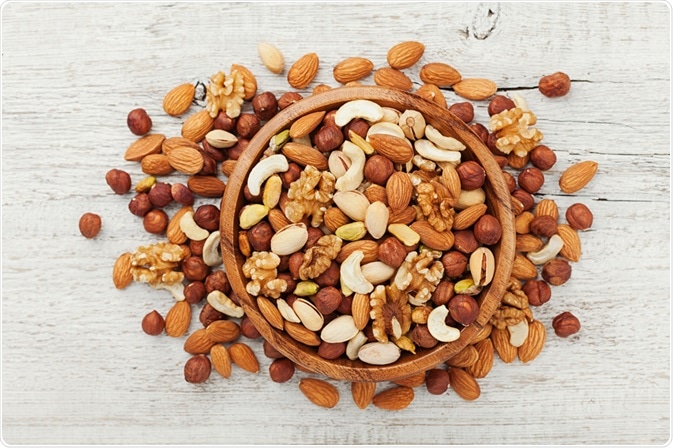 What are the health benefits of nuts during pregnancy?

Nuts such as almonds, walnuts, pine nuts, peanuts, and hazelnuts provide many health benefits. Nuts are full of polyunsaturated fatty acids and other healthy nutrients (fibers, vitamin E, plant sterols, and L-arginine) that help reduce the risk of many diseases, including hypertension, diabetes, and oxidative stress. Moreover, daily consumption of nuts is associated with less cognitive decline in elderly people.

In general, nuts are rich in folic acids and fatty acids, such as omega-3 and omega-6 fatty acids, which are crucial for neural development. These fatty acids can be obtained only from our diet since our body cannot synthesize them and are hence called essential fatty acids.

Omega-3 fatty acid requirements increase in pregnant women compared to the requirement in nonpregnant women. Some studies show that these fatty acids play a key role in the timing of gestation as well as birth weight of newborns.

During pregnancy, eating a handful of nuts can cause accumulation of these components in the frontal part of the fetal brain, leading to improvement in memory and other cognitive functions. According to studies, nut consumption during early pregnancy provides long-term benefits for a child’s motor and cognitive development.

Moreover, eating nuts during pregnancy is approved by the American College of Obstetricians and Gynecologists due to the high protein content in nuts.

In the past, the National Health Service of UK advised women to avoid eating peanuts during pregnancy if there was any history of allergy, including eczema, asthma, food allergy, or hay fever, in the immediate family.

However, more recent research does not show sufficient evidence to link peanut consumption during pregnancy and peanut allergy development in babies. Hence the NHS changed its advice and now encourages pregnant women to eat peanuts or peanut butter unless they are allergic to them or their doctor advises them not to.

Research also shows that while consumption of nuts during early phases of pregnancy is associated with better child development, eating nuts during the third trimester of pregnancy does not cause any significant improvement in a child’s neuropsychological development.

How do nuts help improve a child’s neuropsychological functions?

Folic acid is particularly important during the early phase of pregnancy as this B vitamin helps form the neural tube. Folic acid deficiency can lead to serious birth defects (such as anencephaly and spina bifida) in the brain and spine. According to the Centers for Disease Control and Prevention, every woman of reproductive age should consume 400 micrograms of folic acid daily to avoid adverse pregnancy outcomes.

Consumption of omega-3 fatty acids, especially eicosapentaenoic acid (EPA) and docosahexaenoic acid (DHA), is also important during pregnancy as it is a crucial ingredient for the structural and functional development of the fetal brain, retina, and immune system.

According to scientific evidence, polyunsaturated fatty acids are associated with a number of physiological functions, including regulation of gene expression, maintenance of cell membrane composition, and modulation of membrane channels and proteins. Moreover, they have anti-inflammatory effects, which are particularly beneficial during pregnancy.

The adequate daily intake of omega-3 fatty acids recommended by the Food and Nutrition Board of US National Institutes of Health is 1.4 g and 1.3 g in pregnant and lactating women, respectively. This is required to improve behavior, attention, concentration, memory, and learning abilities in children. A low level of fetal brain omega-3 can lead to cognitive deficits and behavioral disorders such as anxiety, depression, and aggression.

Foods to avoid in pregnancy. www.nhs.uk/conditions/pregnancy-and-baby/foods-to-avoid-pregnant/