If the last time you saw a robot was in the Tiki Room at Disney, let me say that 1) I like your style and 2) there have been a few updates. The oblong shape in the Venn diagram where beauty overlaps with robots is growing. In 2021, robots are ready to paint your nails and do your lashes. Whether you think that sounds cool or creepy (or creepy cool), buckle up — the beauty bots are coming.

The first one you'll probably see is Clockwork, a manicurist robot that offers shiny, red manicures (seems even robots love OPI's Big Apple Red) at a pop-up in San Francisco and, very likely by press time, Rockefeller Center in New York City. Clockwork could not have existed a few years ago, when robot eyes (cameras) could only safely navigate easier tasks, you know, like driving cars on freeways. Perfect manicures require more advanced technology.

"Two really powerful 3D cameras take a hundred or so pictures of each nail and they build what's called a point cloud, which is a 3D map plus color, of your nail that is [run through] an AI [to determine] your nails' edges within 0.3 millimeters," says Renuka Apte, one of two software engineers who built Clockwork. After the robot knows where to paint, the results are run through an algorithm that tells the robot how to paint. It begins moving a nozzle to dispense the polish "in a circular pattern, like icing a cupcake," says Apte. It all happens so quickly that Clockwork can finish each nail in about 30 seconds. 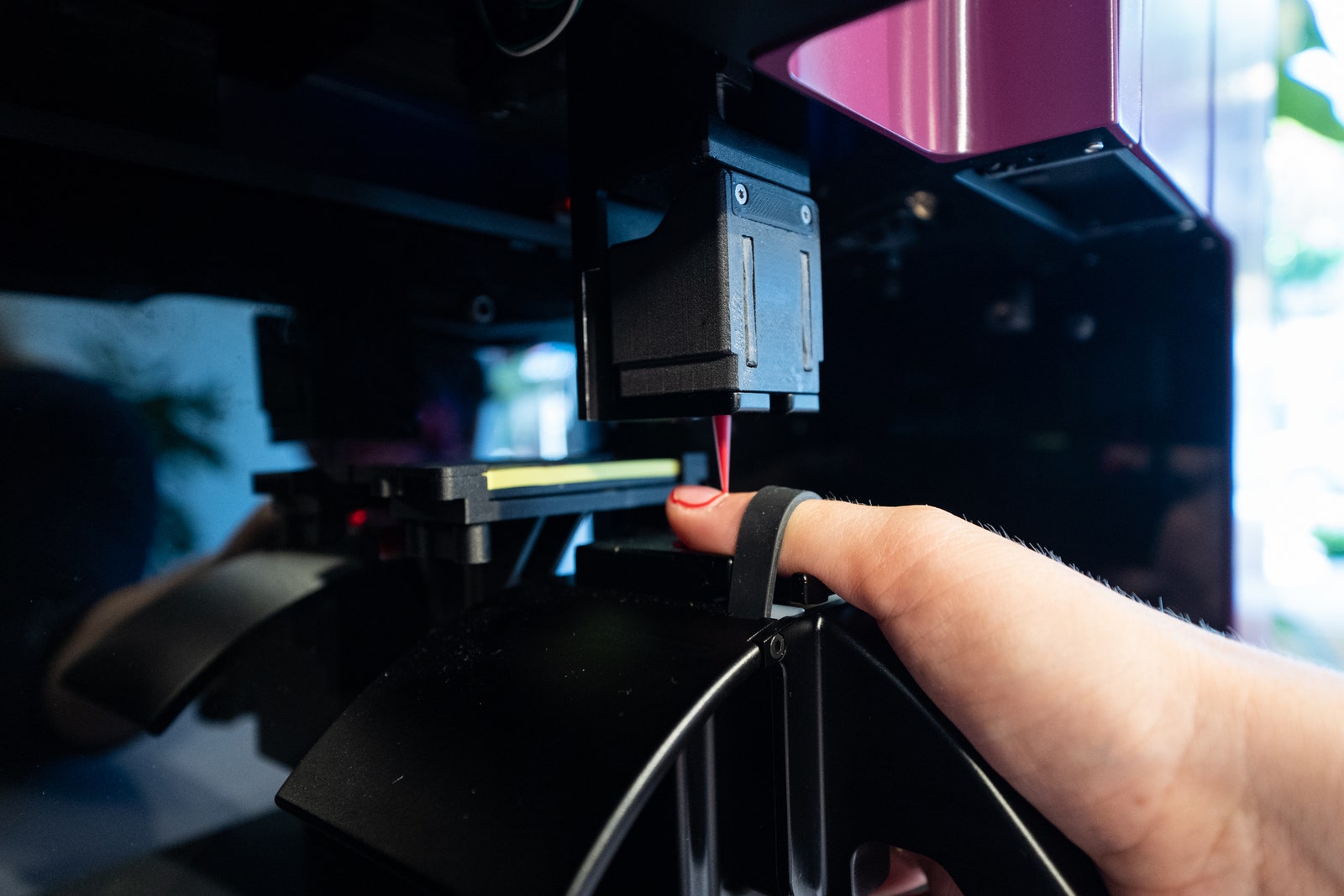 This feat took two and a half years to achieve and costs you around $10 to experience. Clockwork currently has a 10-shade menu, including OPI and Essie classics, and Apte is working on expanding the color range and offering basic nail art, like two-tone designs. She says leasing requests are coming in from major U.S. retailers, office buildings, luxury apartment buildings, high-end gyms, and airports.

For an unassisted robot to touch a human is a big deal. Think of the last time you let something with superhuman strength and limited reasoning capabilities touch you. You haven't. In fact, it's not something that's ever really happened before, certainly not in the form of casual five-minute manicures. But that is just the beginning. A robotics engineer in Oakland — who has been filing patents for brow-tattooing robots and looking into spray-tan robots — spent four years building machines that work in tandem to give you lash extensions in 30 minutes or less (it can take mortal professionals about three times as long). 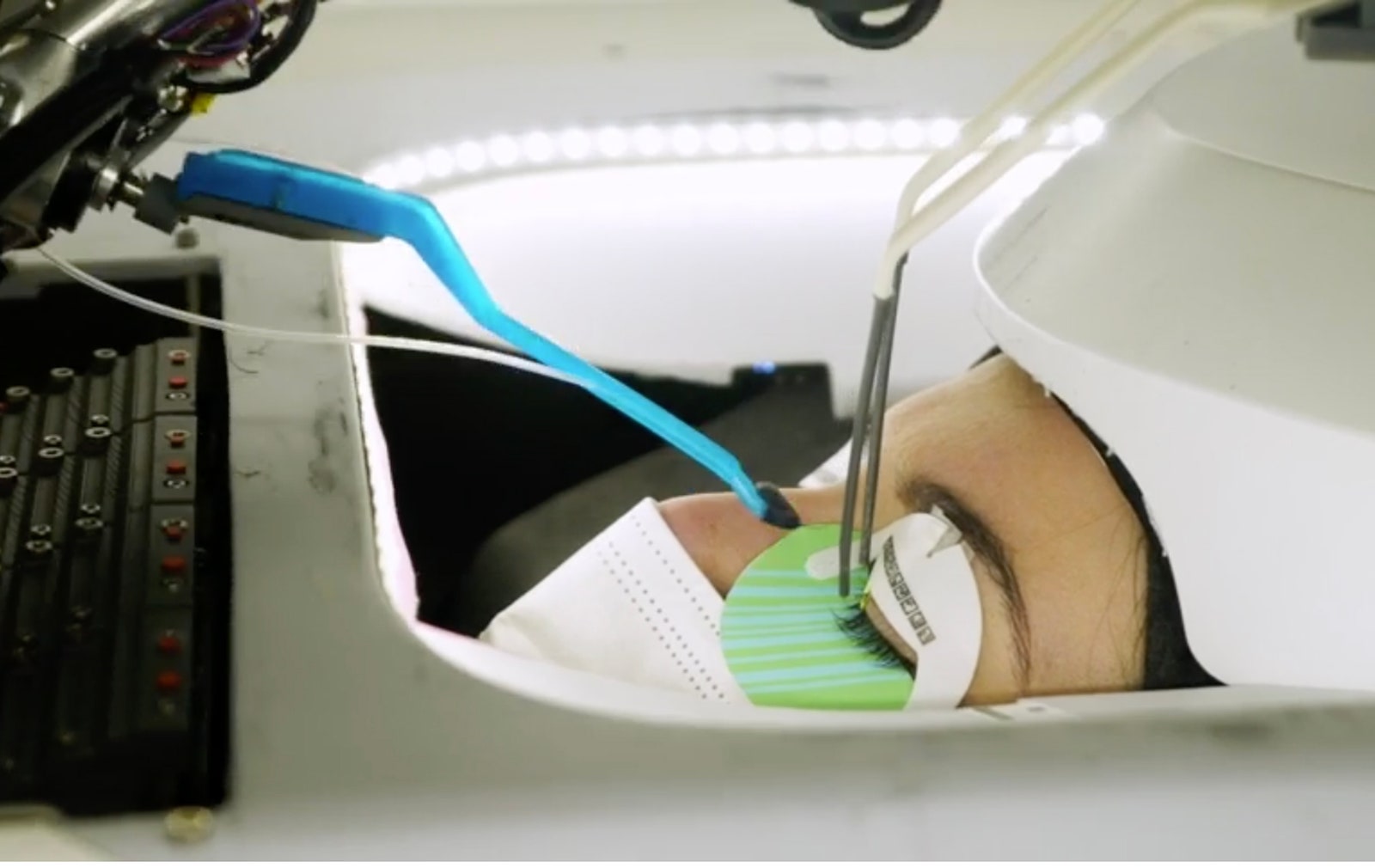 "Their 'brains,' essentially, are built out of all these little calculations that [behave] like the way neurons behave," says Nathan Harding, cofounder and CTO of Luum. "One [robot] searches for an isolated lash using flexible wire ends and it tells the other robot, 'Hey, come over here and place an extension.' The placement robot has to know exactly where it is in space to accurately [lay an extension on top of an eyelash], [and those are] both about a hundred microns in diameter." (To put that into context, a lash or strand of hair is about 70 microns wide.) If you think it sounds nuts to let robots mess around near your eyes, "That size is big to the robot," says Harding, whose robots are booking sessions for $50 (actual salons could open later next year).

"Computer vision has changed drastically and it's going to make it possible for more and more robots to come into 'real life.'"

And then there's the robot hair salon. You laugh. Maybe you wince. But then you realize: Between Procter & Gamble's labs in Cincinnati and Dyson's in Malmesbury, England, all that's missing is a barista bot and clients. At P&G, to test 2,000 shampoo prototypes each month, MEL washes hair while ALI lathers to see how big the shampoo bubbles get, all before DRF, across the room, finger-combs freshly washed hair to see how smooth it feels, says Stephen Hendrix, a scientist at P&G. (The robot names are acronyms for what they do: Mechanical Electronic Lathering, Automated Lather Instrument, and Dynamic Rinse Friction.) 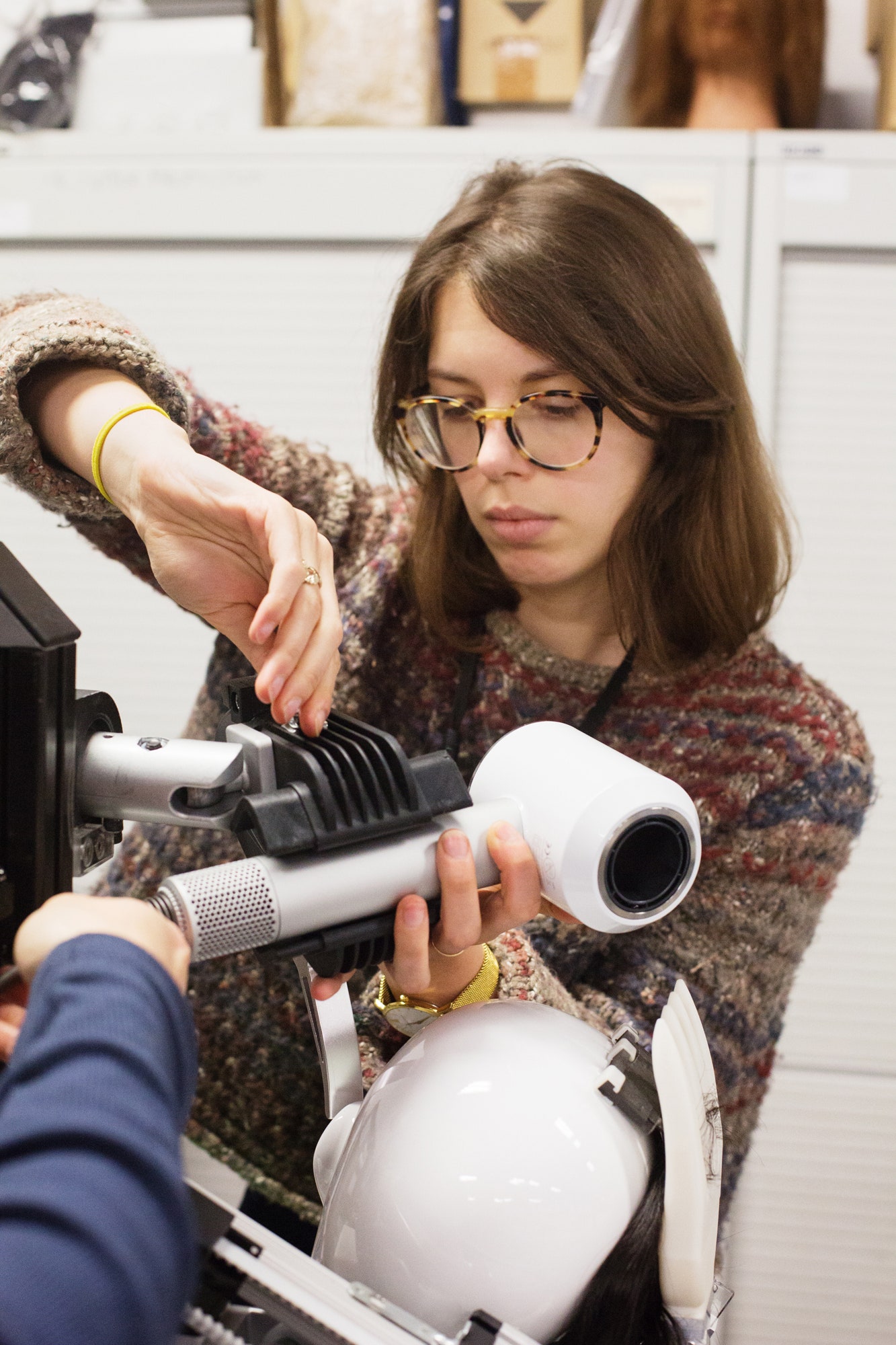 At Dyson, robots style hair all day long, testing the company's tools and tools-to-be. Engineers there (human ones) viewed hours of video footage of real people doing their hair and then programmed robots to imitate them, oscillating driers from side to side. The machines don’t have faces, but they do, of course, have hair and "hands" — one of which moves through the hair, tousling while drying, says Veronica Alanis, engineering lead at Dyson.

The robot playing with lipstick at Shiseido's labs in Tokyo is an arm that puts swatches on white paper. It swipes pinks and purples at "a constant weight and speed, which imitates a customer applying it to the lips," says Yusuke Nakano, group manager of the Global Brands R&D Center at Shiseido, noting that pressure and pace are adjusted for different lipsticks, mimicking the way we change application habits based on a lipstick's shape, feel, and the heft of its container. 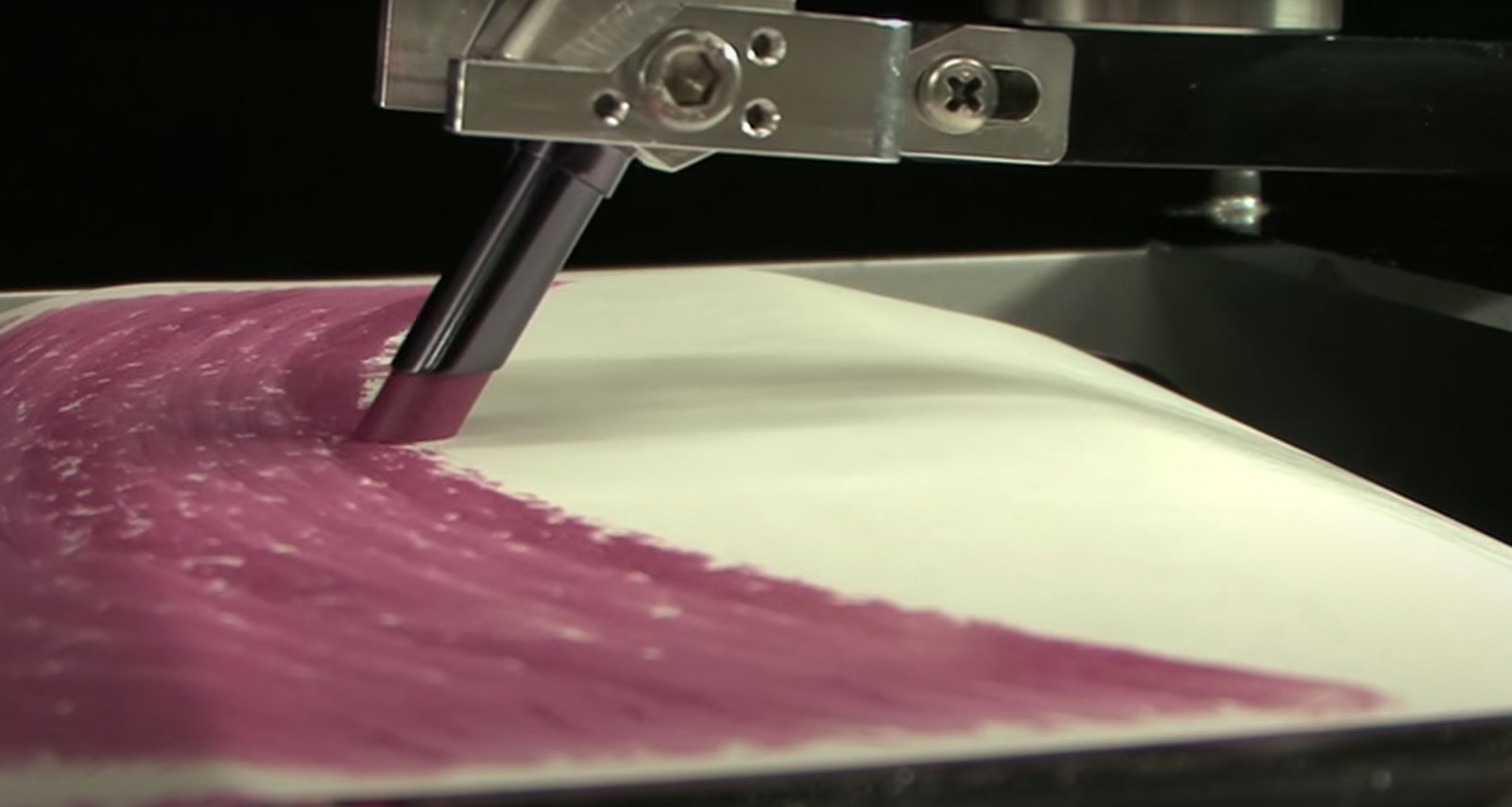 To be clear, none of these robots actually look like people. None venture into the uncanny valley, which posits that the more human a robot looks, the more unease it causes. Many appear to be, more or less, just metal boxes; their magic is on the inside. They can replicate, to some extent, human skills and senses, particularly sight. "Computer vision has changed drastically and it is going to make it possible for more and more robots to come into 'real life,'" says Clockwork's Apte. "This will lead to a whole bunch of questions about regulations, safety, and what happens to jobs."

The ethics of robotics is a fledgling field, but Clockwork and Luum are definitely raising major questions about where the beauty industry can (and should) go. Even if a machine can be programmed to replicate abstract, leopard-print nail art, it can't replicate the creative and visionary artist who dreamed up the abstract, leopard-print nail art to begin with. Perhaps a robot can give you the round-brush blowout in the shampoo ad, but no metal fingers can relax you like a stylist, who turns a shampoo into a cranial sacral massage.

In the end, robots will always lack something the rest of us have: humanity. "People crave human connectedness and social engagement," says Hendrix. "I don’t think that’s ever going to change." 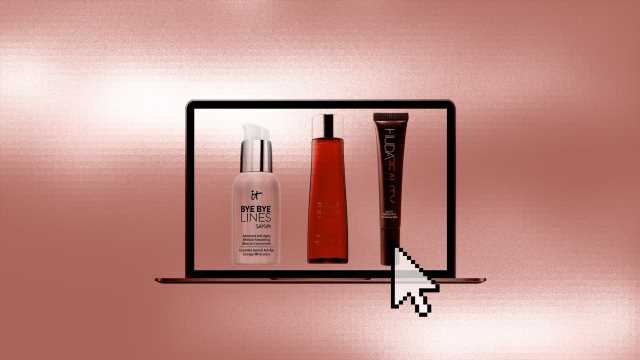 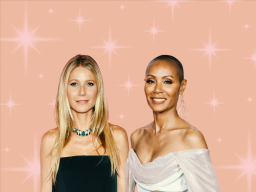 How 12 Celebrity Parents Talk to Their Kids About Sex 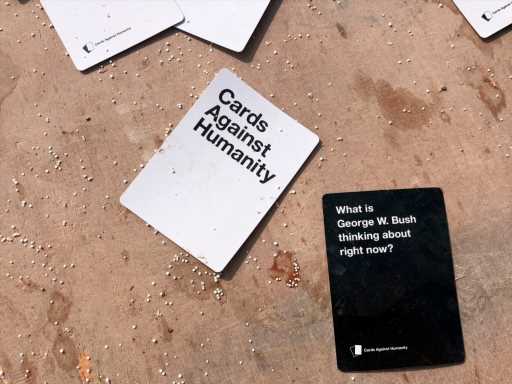 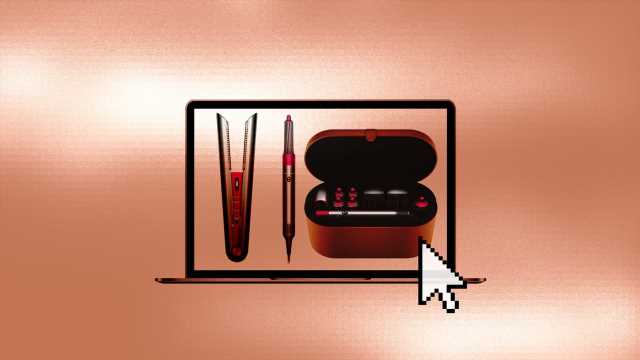 Dyson's Hair Tools Are 20 Percent Off, But Not for Long