I Have "Strawberry Legs," and I'm Very OK With That

There is an airborne virus circulating through the world right now, which I would say is enough to be insecure about. In apocalyptic times like these, the last thing I'm thinking of is how my cleanly shaved legs look — especially since I haven't been shaving them as often.

But one afternoon, scrolling down my Twitter feed, I, for the first time in decades, was compelled to think about the appearance of my legs. I came upon a Tweet that included a pair of close-up photos of Beyoncé's legs. The queen's gams are indeed a sight to behold, but it was the caption that threw me. "Beyoncé has strawberry legs like me," the person wrote, adding a cute-eyes emoji to the post.

"Strawberry legs?" I said. "Now, what in the world?" The image of Beyoncé's legs revealed tiny little dark spots where her hair follicles are. They're a feature I noticed about my legs when I started shaving them as a pre-teen and I hadn't thought much about them since. At the time, the legs that I saw in the media were typically airbrushed and smoothed into one uniform color. This was the early 2000s, so you know there was nary a nick, a scratch, or a scar in sight. But after looking around at my classmates and noticing that almost everyone had tiny pores on their freshly shaven legs, I moved on. I never thought of it again — that is, until I saw this Tweet.

I have to admit, my lizard brain almost immediately went to "Is this something I need to worry about now?" But after reading it again, I got the impression that the original poster wasn't trying to express there was anything wrong with your legs looking like this. Indeed, it appears she felt seen and normalized by the images. But still, I was a little bothered. Not by the poster, of course. I was more upset with society making us think perfectly normal, often innocuous features on our bodies need to be "fixed." Even when you Google the term "strawberry legs," the top results are all articles on how to get rid of them.

The truth is that "strawberry legs" is more of an encompassing term that can colloquially describe something as harmless as dark pores, or an actual condition that comes with chronically dry skin. "The term 'strawberry legs' has been used to describe legs that display prominent red or black dots representing hair follicles," Birmingham-based board-certified dermatologist Corey L. Hartman tells me. "The name comes from the resemblance to the seeds of a strawberry."

For most people, "strawberry legs" ain't nothing but some ol' hair follicles. Seriously — that's it. The only time to really worry about them is if you're dealing with an actual skin issue. "These dots can represent several different skin conditions, however, and the follicles are more prominent because of the buildup of oil, bacteria, and dead skin cells," explains Hartman. "Strawberry legs can be used to describe folliculitis, keratosis pilaris, clogged pores, and dry skin." 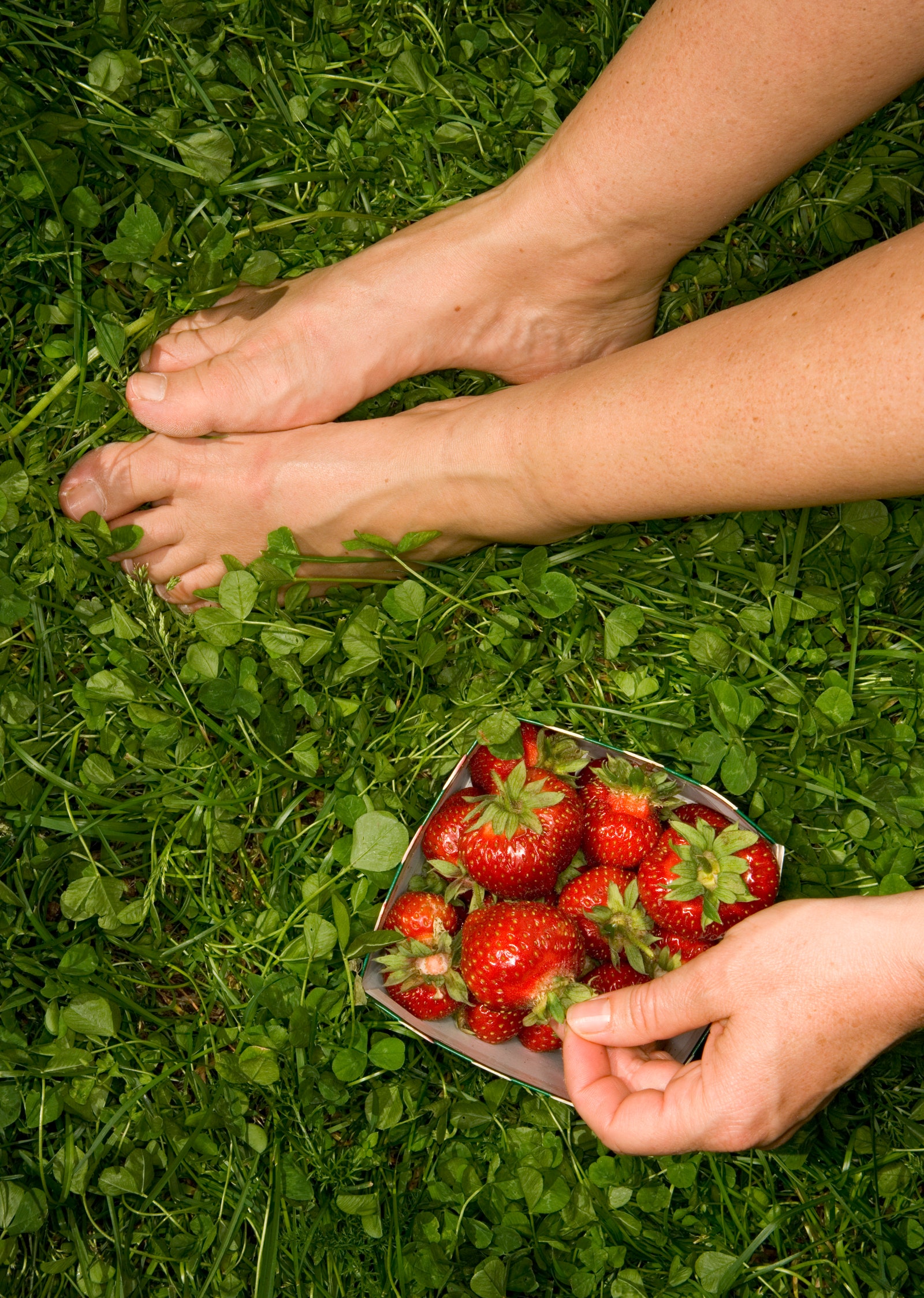 If the little dots on your legs don't appear to be raised or inflamed, you're most likely fine. "Pores on legs are dark mostly because there are terminal, prominent hairs that are frequently shaved, but still visible," says Hartman. If you're experiencing something more than just visible pores, like keratosis pilaris, there are ways to treat it. But first, you have to be able to tell the difference.

The first thing that can give you "strawberry legs" is folliculitis, which New York City-based board-certified dermatologist Shereene Idriss previously told Allure is "most often due to inflammation around hair follicles, or an irritation secondary to chronic rubbing." Over-shaving your legs, or not doing so correctly, can cause this to happen.

"Even mild folliculitis, inflammation of the hair follicles that occurs with shaving, can leave behind hyperpigmentation which accentuates the dark appearance of the pores even further," Hartman notes. "Since shaving is done so frequently on the legs, the cycle of inflammation repeats frequently, causing a persistent inflammatory state and a steady increase in the post-inflammatory hyperpigmentation." If you're seeing irritation and inflammation, you'll want to check with a dermatologist on your next steps.

"Consider treating for folliculitis with a topical antibiotic and cleanser containing either benzoyl peroxide or sodium hypochlorite," Hartman says. "If folliculitis persists, oral antibiotics may be necessary for the short term. In resistant cases, laser hair removal is a permanent solution by eliminating the hair that is causing the problem.” Of course, always check with a dermatologist before choosing a treatment plan. They'll be able to accurately diagnose what you're dealing with and help you decide how best to remedy it.

Now, the little dots on your legs can also be keratosis pilaris (KP), but there is a way to distinguish this condition from some regular dark follicles. "KP is a common skin condition that causes patches of rough, follicular bumps that are associated with dry skin," explains Hartman. "The bumps represent hair follicles plugged with dead skin cells that occur due to lack of exfoliation, or mildly inflamed, red papules. It differs from dark pores which represent shaved dark hairs and keratin which turns dark when exposed to oxygen." Bascially, if you're feeling raised bumps on your legs, versus just seeing dark spots, it's probably KP. 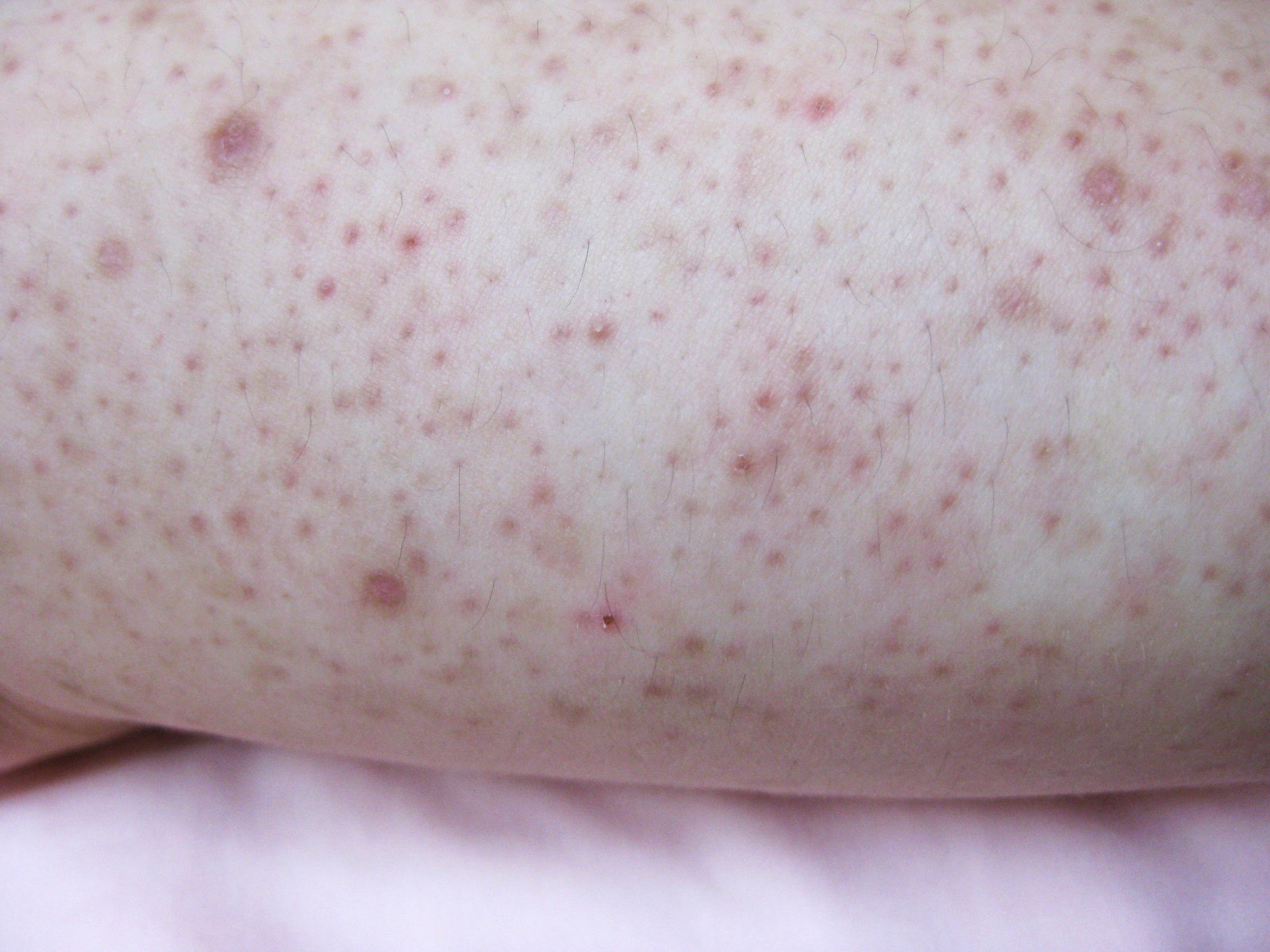 Hatman notes that KP comes from dry skin and while it is an issue that can be managed, there is no cure for it. If KP sounds more like what you are dealing with, Hartman offers a bit of advice for treatment. "KP is treated by addressing all three issues that contribute to its development: dry skin, lack of exfoliation, and mild inflammation," he says.  "I recommend a thick moisturizing cream, mild steroid or topical immunomodulator, and chemical exfoliant, like glycolic or salicylic acid." (We have a whole list of some dermatologist-recommended KP treatments, in case you'd care to browse.) Just keep in mind that if you are going to use chemical exfoliants, don't over-use them to the point where the treatment is causing more irritation.

So what have we learned? "Strawberry legs," more or less, is an umbrella term for the appearance of follicles — inflamed, raised, or not. While there are times where it presents as an actual skin issue, if you see them after you shave your legs it's not a big deal — just the natural appearance of skin.

I probably don't need to tell you that excessive airbrushing and unattainable beauty ideals have given people a distorted view of what bodies should look like. But here's a reminder: We have pores. They're going to be visible if you look close enough. And to editorialize a bit more, it's your right to be self-conscious about them, but life is too short and precious. Plus, the vast majority of us simply don't care if your teeny-tiny leg pores are a little bit darker than the skin around it.  And even if it is KP or folliculitis, that doesn't make your legs any less beautiful.

Besides, "strawberry legs" has to be the cutest name for a skin-related issue (which is oft times a nonissue). I think mine are pretty adorable and they, along with the rest of my body, will enjoy this summer freely.