It was a cool, sunny morning in the city of Vijayanagar when the tall, dark man in spotless white cotton clothes strolled out of his house. Enjoying the beautiful day, he walked slowly towards the palace of King Krishna Deva Raya.

Past the orchards of a nobleman’s mansion, he was walking under a stone gateway when he heard young voices raised in argument. The man stopped to listen.

‘Then can I be Minister Saluva Timma instead?’

Getting even more curious, the man peered past the gateway and first saw a plump boy with large bright eyes. As he flicked back his long hair, he said, ‘Play any role you want as long as I am the royal court’s wittiest and cleverest man … ahem …’ He cleared his throat importantly. ‘… Tenali Rama, of course!’

With a silent laugh the man looked around, found a large boulder to sit on, and settled down. He was the only observer of the street show unfolding before him.

Half a dozen boys were acting out a day in the royal court of Vijayanagar. A sort of throne had been created using an old broken bed, covered with a tattered piece of matting. And now the boy playing Deva Raya strutted up importantly to his makeshift throne and sat down.

‘Ah, Deva Raya!’ sighed the observer with an inward grin as he noticed the boy’s scuffed knees and bare feet. ‘I wish you could see yourself now.’

The boys playing Tenali and Minister Timma stood on either side of the throne and the others playing courtiers stood before them.

With a royal wave of a thin arm, the street side king yelled, ‘Bring in the first case!’

A stocky boy came forward and said doubtfully, ‘This is a real problem. Can you solve it?’

‘I’m here about the cow, Your Highness,’ said Kesava.

‘His cow, my garden. What else?’ Kesava looked impatient. The observer swallowed hard to stop himself from laughing out aloud.

‘What cow? What garden?’ Timma was beginning to sound a bit like a parrot.

‘I mean my neighbour’s cow getting into my garden,’ Kesava was finally getting his words into some kind of order. Then the problem became clear.

The cow was always getting into poor Kesava’s kitchen garden, chewing up the banana plants, devastating the pumpkin patch. And now trampling over the bamboo fence they had built, it had eaten his mother’s precious marigolds. ‘What can I do about it?’

Deva Raya frowned. ‘Ask the neighbour to pay for the damages his cow has caused,’ the twelve-year-old ended solemnly.

Kesava looked as solemn as Deva Raya as he said, ‘I can’t. My neighbour is a wrestler.’

‘Oh!’ the deflated faces proved the real problem was now finally being understood by the pavement king and his rag tag court. Deva Raya looked around helplessly at his ring of bedraggled courtiers and asked, ‘What should Kesava do?’

The observer, forgetting about his errands of the morning, sat absorbed in the high drama. ‘I have to ask the king,’ he thought. ‘What would he do to handle the wrestler and his heavyweight cow?’

The courtiers were coming up with solutions. ‘Build a stone wall around the garden,’ one suggested.

‘Bah!’ Kesava gave a dismissing shake of his head. ‘You think my poor potter father has money for stone walls? He’s still worried about the cost of the bamboo fence.’

‘Then stop growing pumpkins,’ said a thin boy with no front teeth.

‘And what will my mother put in the sambaar?’ asked Kesava. ‘Grass?’ 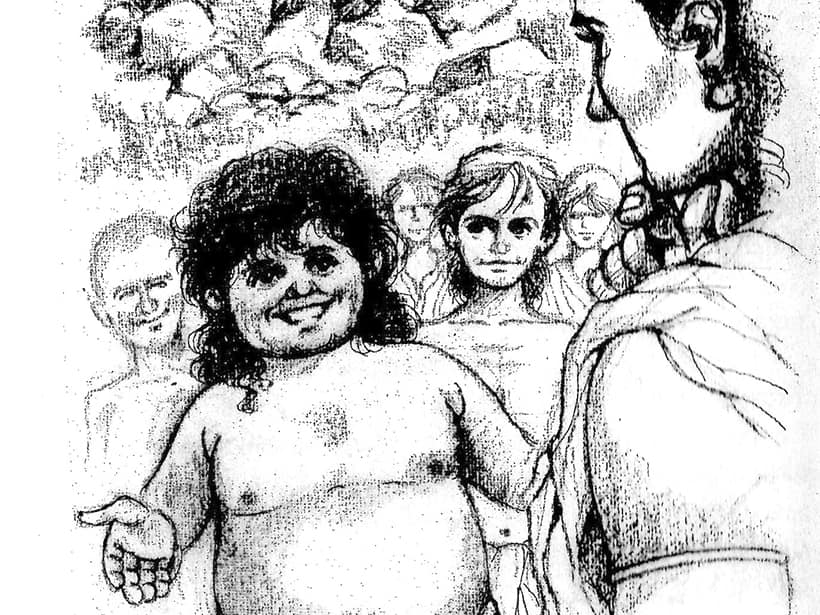 The observer, no longer able to stop himself, laughed out loud. Six pairs of astonished eyes looked at him.

‘Forgive me, boys,’ the man muttered. ‘I hope you don’t mind my listening to your problem. It’s so interesting.’

‘You’re welcome, sir!’ the half size Tenali Rama spoke for the first time, waving a pudgy hand. ‘Maybe you have a solution?’

‘Well …’ the man scratched his chin thoughtfully. ‘Kesava could send his goats to wreck the neighbour’s garden.’

Kesava rolled his eyes in pure disgust. ‘Devayya, dear Lord! You think my puny little goats have the courage to enter a garden guarded by a wrestler and his huge cow?’

‘Then …’ the man suggested apologetically, ‘maybe you could refuse to let the cow go back?’

The chubby Tenali shook a tousled head. ‘You’re again forgetting the wrestler.’ Then he gave a patient sigh. ‘It looks like only I, Tenali, can solve this problem.’

‘What do you like more, Kesava, pumpkin or payasam?’ he asked suddenly.

‘Then the next time the cow is chewing the pumpkin vine, get a pot and quickly milk her. And give the milk to your mother to make payasam, or sell it to buy some pumpkin. Just see that the wrestler doesn’t catch you stealing the milk,’ Tenali shrugged disdainfully. ‘Quite simple, don’t you think?’

‘Aah!’ a satisfied sigh floated across the court.

The problem had finally been solved.

The observer got up, walked up to Tenali and bowed low. ‘Yes, you are truly as clever as the other Tenali and I feel you deserve this for solving a vexing problem.’ And he gave the grinning boy a silver coin.

Leaving behind an excited bunch of boys planning what to buy with their sudden earnings, the real Tenali Rama walked away. Turning at the corner, he stopped and laughed in sheer delight. ‘Well, Tenali,’ he said to himself, ‘you thought you were very clever. But a ten-year-old boy has beaten you.’

Then he hurried towards the palace. King Krishna Deva Raya would love this story!