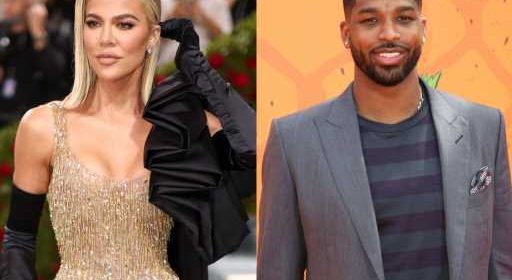 Khloé Kardashian and Tristan Thompson’s romantic relationship may be dead and gone, but that’s not standing in the way of their co-parenting relationship with their daughter True, 4.

This Father’s Day weekend, Kardashian, Thompson, and True all met up on June 18 for lunch — seemingly working on an amicable relationship for their little one. Proud grandma Kris Jenner also decided to tag along for the lunch date with her grandbabies Dream, Chicago, and Psalm.

You can see the photos HERE.

In the photos, we see the family walking around Calabasas, with Tristan carrying True in his arms as Kardashian is nearby.

Now, Kardashian and Thompson dated on and off again from 2016 to 2021, welcoming their daughter True in April 2018. However, they separated for good in 2021, with word breaking out soon after that Thompson had cheated on Kardashian with a woman named Maralee Nichols. Not only that, but he confirmed he was the father of the woman’s son, whom she conceived while he was also dating Kardashian.

Despite their messy end, it seems the two have worked on a strong co-parenting dynamic. In a 2021 interview on the Drew Barrymore Show, Kardashian credited her co-parenting skills to her mother, her late father Robert Kardashian, and stepparent Caitlyn Jenner. “I have first my parents, my mom, my dad and my stepdad, that trilogy was just like the ultimate because what they embedded in us and what they showed us, and I don’t think I understood how mature and respectful and loving my three parents were until you put yourself in a similar situation,” she said.

She added, “Of course, there are days that are definitely more trying, bumpy and turbulent but you never speak poorly about someone that you have a child with or even an ex at all, like at some point you chose to be in that relationship and at some point, there was love and respect, so why can’t we at least find a common ground somewhere.”

Before you go, click here to see all the celebrities who have opened up about the struggles of co-parenting.