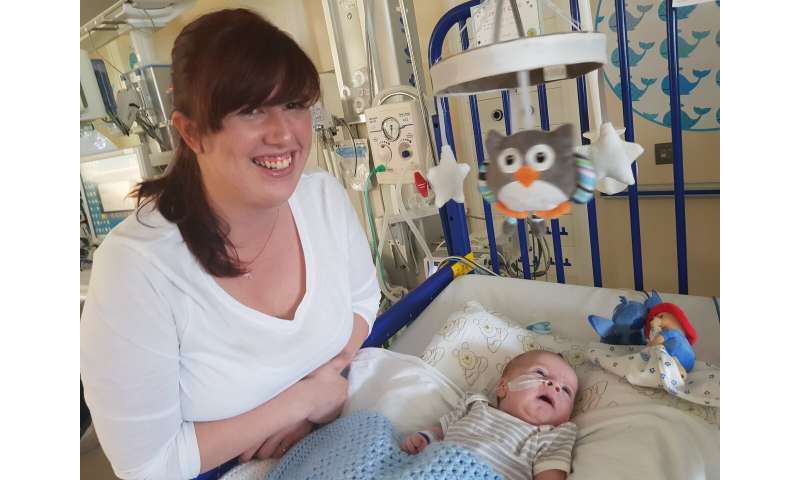 Scientists at the University of Strathclyde are researching a system to measure and monitor blood chemistry levels in premature and sick babies through their skin, which if successful, could eventually replace the need for invasive blood tests.

When babies are born early or sick there is a medical need to track levels of electrolytes such as glucose, lactate, sodium and potassium in their bodies, as the balance of these can be critical.

The levels are currently measured by heel stick blood tests or blood taken from a vein, which can be distressing and risk depleting the blood at the time when the infants in the neonatal intensive care unit are already vulnerable.

The University team is researching whether levels of glucose and lactate can instead be accurately collected through the skin. A clinical trial is in progress with the medical team at the Neonatal Unit of the Royal Hospital for Children in Glasgow.

If the technique is found to work, it will be transferred into a future medical device in the form of a wireless patch sensor that could be used for any sick baby.

Professor Patricia Connolly from Biomedical Engineering at Strathclyde, said: “At the moment, the blood chemistry on the babies is measured by taking a blood sample through a heel prick capillary or through a vein, which needs to be performed regularly.

“Our technology is aimed at removing the need for that because many of these molecules and ions will also come through the skin.

“Instead of actually having to take blood, our trial is using a skin patch that will collect glucose and lactate.

“We can collect the levels in a special type of gel electrode, and the levels are also compared to the level of glucose in the blood samples that are still being routinely taken by medical staff.

“Through our research we aim to show that what we take through the skin can be calibrated against what’s in the blood.

“If the trial confirms this, then it opens up the way for wearable devices to monitor these babies through the skin, without taking any blood or using a needle.

“The wearable system would also mean that parents won’t have the distress of watching their babies having blood sampled and would also minimise the amount of blood being taken at a time when they’re already challenged.”

The research team are using laboratory equipment to carry out the trial, but work has already begun on a miniaturised system which would work wirelessly.

Strathclyde spin-out bioelectronics company Ohmedics Ltd, of which Professor Connolly is also CEO, will take forward the commercialisation of any future technology.

The sensor should work by extracting the molecules and ions across the skin, detecting this flow and using Bluetooth to send the levels to a mobile phone device.

The patch, which is being designed to be placed on the baby’s stomach, would need changed every 24 hours, would measure in real time and take just 30 seconds for a reading.

The wearable, wireless devices would also make it easier for parents to take the babies out of their incubators and hold them, something that is known to help babies’ health. 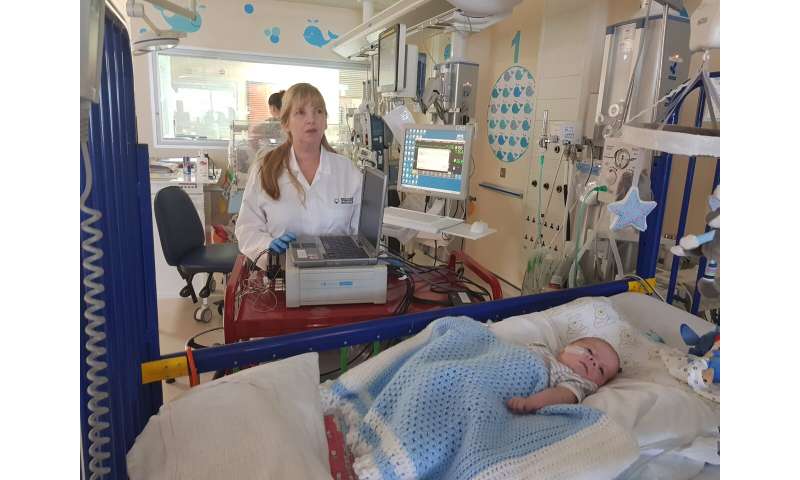 Presently, babies who need to undergo frequent conventional sampling, often need blood transfusions every one to two weeks, particularly those who have been born pre-term and have lower blood volumes. The new system could help prevent this.

Any pain or distress caused by sampling in this way may have an effect on neurodevelopment—the brain’s development of neurological pathways.

Project partner, consultant paediatrician Dr. Neil Patel said: “The distress and pain of blood sampling in a newborn baby is not just short-term discomfort, but may cause long-term neurodevelopmental issues as well, which this approach could completely avoid.

“There is also a real risk of the need for blood transfusion for these babies due to the depletion of blood volumes. Some of the babies in the unit need to have blood samples taken four or more times every day. The sickest babies or those with unstable blood glucose results, may need to have samples taken even more frequently, sometimes every hour.

“If the research results are good then this work could translate into a patch which would remove the need for conventional blood sampling for glucose and lactate.”

Fellow consultant paediatrician, Dr. Helen McDevitt said: “If the outcomes of the hospital trial are positive, then it is hoped to plan for a future, wearable, wireless device.

“It’s in development as a laboratory prototype.”

The researchers say the finished product wouldn’t be expensive to manufacture and could lend itself to further use in challenged medical environments abroad where clinical access can be difficult.

If the research is successful, a device could eventually also be developed for adults.

Glasgow Children’s Hospital Charity funded the preparation for the clinical trial and Strathclyde, in collaboration with the Royal Children’s Hospital and Ohmedics, also received a grant through the Grand Challenges Explorations initiative of the Bill & Melinda Gates Foundation, for the initial development of a future, wearable, wireless device for use in low resource settings.

Kirsten Sinclair, the Chief Operating Officer of Glasgow Children’s Hospital Charity, said: “We are proud to have supported this pioneering research which could transform the care of Scotland’s tiniest and most vulnerable babies.”

The project has also benefited from a Doctoral Studentship within the Centre for Doctoral Training in Medical Devices at Strathclyde from the Engineering and Physical Sciences Research Council, part of UK Research and Innovation.

According to the UK’s leading neonatal charity Bliss, around 60,000 babies are estimated to be born prematurely—before 37 weeks of pregnancy—each year in the UK.

Debbie Bezalel, Head of Services, said: “Anything that can be done to reduce a baby’s experience of pain is a huge step in the right direction to ensuring that babies born needing neonatal care receive the best possible standard of care.”

Parents Adam Davidson and Lindsay Chalmers have been taking part in the clinical trial with their baby girl Georgia. She was born six weeks early in a planned Caesarean section on 19 June this year due to a build-up of fluid around her lungs. This can make it difficult for her to breathe, and she has undergone surgery.

Dad Adam, 25, from Livingstone, said: “We were pleased to take part in the trial because anything that could make taking the blood samples easier and without using a needle, is better.