The effectiveness of electrical stimulation in producing spinal fusion 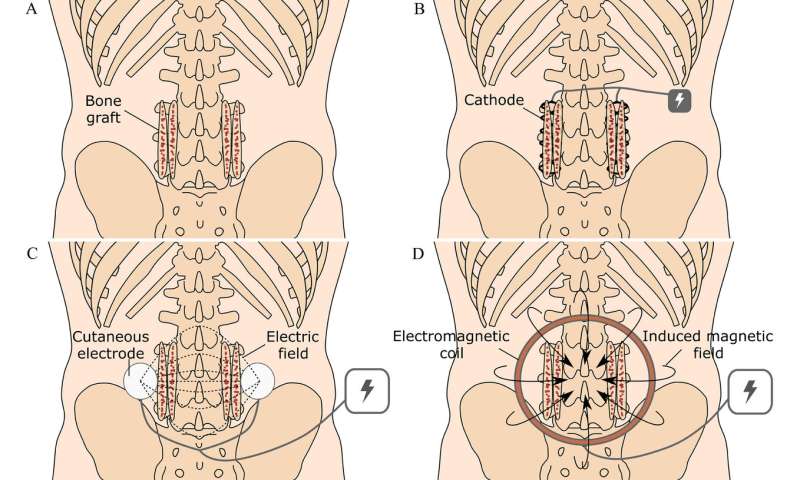 Researchers from The Johns Hopkins University School of Medicine performed a systematic review and meta-analysis of published data on the effect of electrical stimulation therapies on spinal fusion. They found significant improvement overall in the rates of bone fusion following a course of electrical stimulation in both preclinical (animal) and clinical (human) studies.

Detailed findings of this study can be found in a new article, “The effect of electrical stimulation therapies on spinal fusion: a cross-disciplinary systematic review and meta-analysis of the preclinical and clinical data,” by Ethan Cottrill and colleagues, published today in the Journal of Neurosurgery: Spine.

Background: Each year in the United States approximately 400,000 persons undergo spinal fusion surgery for spinal instability, pain, and/or loss of function. For some of these people, surgery alone does not produce complete spinal fusion. In those cases, adjuvant therapies must be instituted to aid in the process of bone healing.

Direct current stimulation requires implantation of a stimulation device, which is usually done at the time of spinal fusion surgery. The device is small and is placed under the skin on the patient’s back. Via electrodes, the device delivers a small direct current of electricity to the area where fusion needs to occur. The battery powering the device is good for 6 to 12 months; after that time, it can be removed or remain in place as the patient or physician deems appropriate.

Capacitive and inductive coupling stimulation therapies are noninvasive. With capacitive coupling stimulation, two small electrode pads are placed on the skin over the region of desired bone fusion. These pads produce an electrical field surrounding that region when powered by an external alternating current generator. This device is worn by the patient for 6 to 9 months and operates approximately 24 hours per day. Inductive coupling stimulation involves the use of electromagnetic coils placed on the skin over the site of anticipated bone fusion. Alternating current produces an electromagnetic field to induce bone fusion. This device need only be used for 30 minutes to 2 hours per day until fusion is confirmed.

Each therapy has a particular mechanism of action and carries advantages and disadvantages. These are all described and compared in the paper by Cottrill and colleagues.

Present Study: Application of direct or alternating electrical current has been shown to induce and speed up the process of bone healing following spine fusion surgery. Evidence for this has come from small studies. Cottrill and colleagues set out to pool the data from small studies on the effects of electrical stimulation therapies and to comprehensively assess these effects overall and in specific subgroups.

In a subgroup analysis of clinical studies, the authors found that the number of spinal levels that were fused and whether instrumentation was used did not change the effectiveness of electrical stimulation devices. They also found that these devices improved the rates of fusion in patient groups prone to have difficulty in achieving total spinal fusion, such as patients with difficult-to-treat spines and smokers.