Scientists have found the first evidence suggesting emotional stress in infancy has significant and far-reaching effects on the body and could result in disease later in life.

Psychological stress in infancy dramatically changes the amount of an important class of proteins, called GABAA receptors, which in turn may alter the workings of the heart, lungs, kidneys and bladder.

It was already known that changes in the amounts of GABAA receptors causes some brain disorders, but researchers at the University of Portsmouth are the first to show that stress can also alter their expression in other organs.

The research team in the School of Pharmacy and Biomedical Sciences studied the way GABAA receptors behave in secondary organs in mice which had first been exposed to stress.

The study provides hope that drugs targeting these receptors can now be developed to treat a range of medical conditions, from hypertension to asthma, and from diabetes to inflammatory bowel diseases.

The study is published in Frontiers in Molecular Neuroscience.

Researcher Dr. Jerome Swinny said: “GABAA receptors were known to control brain activity and served as important targets for many drugs used in modern medicine to treat brain disorders, such as epilepsy, anxiety as well as inducing surgical anaesthesia.

“We were surprised to find these proteins were also found to be expressed so widely beyond the brain. 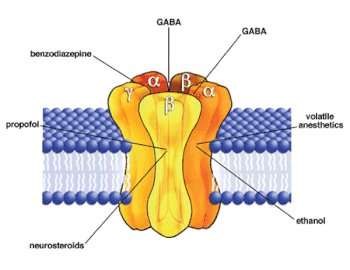 “The dramatic stress-induced changes in the amounts of GABAA receptor compared to what one normally finds is intriguing. It will alter organ function and, we suggest, will contribute to diseases of the organs.”

The research, was led by senior research associate Dr. Mohsen Seifi, together with Ethan Everington and Adina Gibbard who were MSc and BSc students, respectively, at the time, in the University’s School of Pharmacy and Biomedical Sciences.

The research was carried out in the laboratory of Dr. Swinny, a reader in neuropharmacology and one of the authors.

He said: “It has long been known that childhood adversity, such as neglect or abuse, confers a vulnerability to developing a range of medical conditions later in life, including mental illnesses such as anxiety, and cardiovascular or metabolic disorders.

“However, precisely how such emotional challenges impact on the normal functioning of different organs within our body remains elusive, which stops the development of effective drug therapies.”

The human central nervous system is designed to withstand stress, he said, and a certain amount of stress allows humans to adapt and survive in an ever changing environment. The problems begin when exposure to stress is constant.

“A sustained threat is detrimental to our survival. The nervous system of an infant is not mature enough to be able to cope with prolonged exposure to the chemicals which mediate our stress response. As a result, such experiences often confer a vulnerability to changes to the normal development of their body and mind.