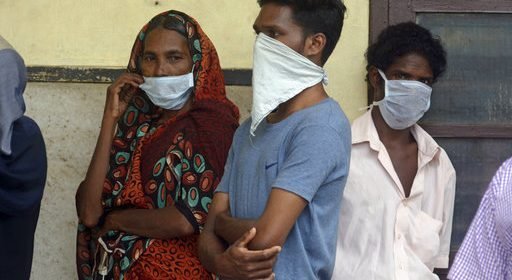 Eight other deaths in the state of Kerala are being investigated for possible links to the Nipah virus, which has a 70 percent mortality rate.

“Health department is doing everything possible to save the lives of the infected & prevent the advance of virus,” his office posted on Twitter.

Samples tested in government labs confirmed the presence of the Nipah virus in three deaths, while Sadanandan said the cause of other suspicious deaths could only be confirmed through tests.

“We have sent blood and body fluid samples of all suspected cases for confirmation. It will take 24-48 hours for the results to come.”

India’s health minister rushed medical experts to the state after a local politician reported that residents were panicking in Calicut.

The team would “initiate required steps as warranted by the protocol for the disease”, J.P. Nadda said on Twitter.

The three who died included two siblings in their early twenties, the Press Trust of India reported.

A nursing assistant who had treated them also died Monday while the father of the victims was undergoing hospital treatment, PTI reported.

Neighbours told local media the siblings who died had eaten fruit picked from a compound where they were building a home.

A bat was found in the well of their home which was later sealed, PTI quoted state health minister K. K. Shylaja as saying.

Nipah induces flu-like symptoms that often lead to encephalitis and coma. Fruit bats are considered the main carrier of the virus for which there is no vaccination, according to the World Health Organization.

Nipah was first identified in Malaysia in 1998. It spread to Singapore and more than 100 people were killed in both places. On that occasion, pigs were the virus hosts but they are believed to have caught it from bats.

In India the disease was first reported in 2001 and again six years later, with the two outbreaks claiming 50 lives.

Both times the disease was reported in areas of the eastern state of West Bengal bordering Bangladesh.

Bangladesh has borne the brunt of the disease in recent years, with more than 100 people dying of Nipah since the first outbreak was reported there in 2001.