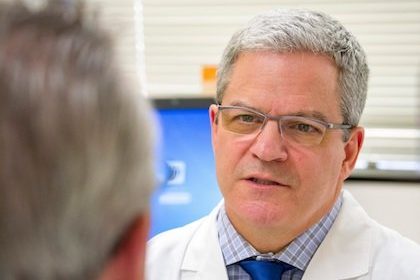 Men often tolerate stress urinary incontinence for more than two years before seeking medical help—and one-third put up with it for more than five years, making it important for doctors to check for this problem, a new study from UT Southwestern researchers advises.

The study, published in the journal Urology, calls on men’s general practitioners and urologists to perform a standing cough test, in which a patient coughs while the doctor watches for any accidental urine release, as a routine part of their male patients’ physicals.

Stress urinary incontinence (SUI) occurs when physical activity or exertion—a cough, heavy lifting, exercise—causes the bladder to leak urine. About 13 million Americans suffer from some degree of incontinence, with women accounting for 85 percent of cases. However, some men who have had prostate cancer treatments involving surgery (prostatectomies) develop the condition.

Even though men are slow to complain, “Male SUI is rare but is known to have significant negative psychosocial and emotional effects and represents a common reason for post-treatment anxiety and depression,” said Dr. Allen Morey, Professor of Urology at UT Southwestern and senior author of the study.

But there are simple and safe solutions—including minor surgeries that can either help boost a weakened sphincter muscle for patients with minimal leakage (the sling procedure), or replace the sphincter muscle altogether (installation of an artificial urinary sphincter) for more severe cases of leakage.

“Using new diagnostic techniques, we are now able to accurately diagnose and streamline treatment recommendations to resolve this bothersome problem for our patients,” said Dr. Morey, who holds the Distinguished Chair in Urology for Urologic Reconstruction, in Honor of Allen F. Morey, M.D., and the Paul C. Peters, M.D. Chair in Urology. “This study highlights an opportunity for improvement.”

During the study, UT Southwestern researchers reviewed the cases of 572 men evaluated for anti-incontinence surgery in Dallas between 2007 and 2017. They found the median length of time the men had waited to seek treatment for their SUI was 32 months, with almost a third having waited more than five years. Patients in their 80s had waited a median of more than seven years.

Most recovery of urinary control occurs within the first 12 months after a prostatectomy, the study notes. Beyond the first year, improvement is unlikely. Care for such patients should include urologist-directed treatment plans that focus on non-cancer problems such as incontinence, researchers said.

Some treatment delay may also be tied to patient reluctance to undergo more surgery or due to limited geographic access to appropriate specialists, researchers said. However, patient satisfaction and quality of life improvement measures for those who do undergo anti-incontinence surgery are high, ranging from 73 to 90 percent, according to the study.