A growing need for tissues and organs in surgical reconstruction is addressed by the promising field of tissue engineering. For instance, muscle atrophy results from severe traumatic events including deep burns and cancer, requiring site/donor compatible surgical reconstruction. The existing ‘gold standard’ treatment in reconstructive surgery incorporates autologous flaps, although the technique is limited by low anatomical availability and donor site morbidity during clinical transplantation. As a clinically favorable alternative, tissue engineering presents strategies to engineer tissue grafts with improved quality and effectiveness. To maintain the viability of implants upon transplantation, increasing efforts are invested in designing pre-vascularized engineered tissue. Design examples include a multicellular culture of endothelial, mural and tissue-specific cells for self-assembly of vessel networks and cellular co-culture to build lasting, stable blood vessels to induce neovascularization within the host.

The same multidisciplinary research team from the departments of Biomedical Engineering and Medicine now report on the development of a 3-D prevascularized engineered muscle containing human myoblasts (muscle cells) with genetically engineered endothelial cells and smooth muscle cells (SMCs), transplanted within a mouse host to enhance neovascularization and myogenesis. The outcomes are detailed in Nature Communications Biology, where Luba Perry and co-workers integrated myoblasts in endothelial cell-mural cell co-cultures as a tissue engineering strategy to increase the mechanical strength of transplanted tissue. The genetically modified vascular cells were cleared for clinical trials by the Food and Drug Administration (FDA), with potential for use in autologous vascularized tissue construction. The study showed promise for translating genetically engineered muscle in clinical settings to overcome autologous tissue shortage and accelerate host neovascularization for engineered grafts integration post-transplantation. 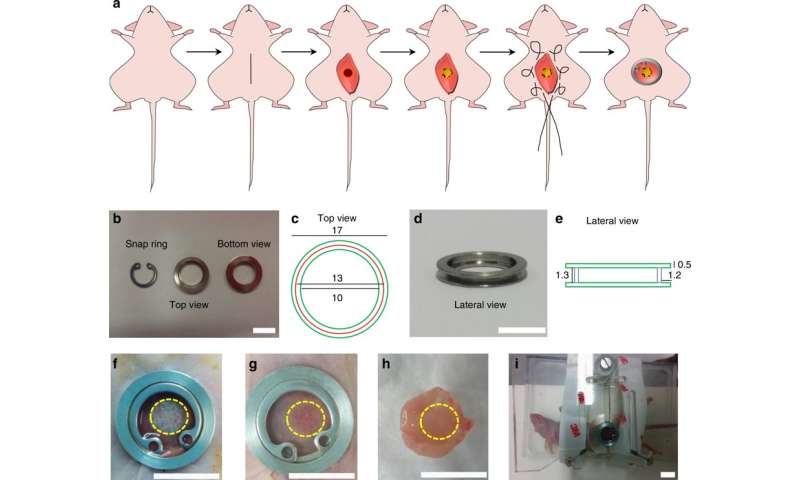 The scientists seeded a multicellular culture of human angiopoietin 1 (ANGPT1) expressing endothelial cells (endothelial cellANGPT1) with human vascular endothelial growth factor (VEGF) expressing smooth muscle cells (SMCVEGF) and human myoblasts (hMyo) on 3-D polymer scaffolds to accelerate the vessel network formation and neovascularization in vitro and in vivo. Upon transplantation into mice with an abdominal wall defect, the host neovascularization was observed via an abdominal imaging window (AIW) for up to 14 days. To avoid transplant rejection, the study used immunodeficient mice for human graft integration. Since the cells used in the study were already FDA-approved for use in clinical trials, the findings may have significant implications in the construction of autologous, transplantable grafts for clinical integration and vascularization.

To investigate the influence of ANGPT1 and VEGF overexpression on vessel maturation, the vascularized constructs were stained for collagen IV and vascular endothelial (VE) cadherin. The results demonstrated a higher percentage of collagen IV-wrapped vessels.

Once ANGPT1-overexpressing endothelial cells were found to increase both the length and maturity of the vessel-like networks formed in vitro, the effect on host vascularization was examined upon transplantation. For in vivo investigations, the scientists used a previously established rectus abdominis muscle defect nude mouse model. The engineered muscles included those formed from a naive endothelial cell-SMC-myoblasts tri-culture as the control, alongside muscles formed from endothelial cellANGPT1, SMCVEGF and myoblasts tri-culture as the test, implanted four days after seeding. Both groups showed highly effective host-graft integration 14 days post implantation. 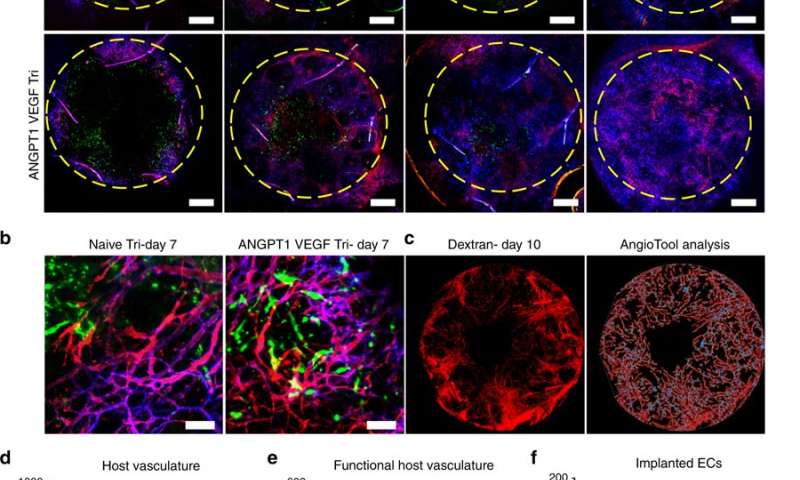 By as early as four days after implantation, the host vessel invaded into both graft types, although the progression and coverage were faster in the ANGPT-1- and VEGF-expressing test grafts. After 14 days of transplantation, the test grafts were more densely populated with host vasculature than the control triculture grafts; by this time, the implanted scaffold vasculature for either graft was no longer visible. At four to 14 days post-transplantation, the total length of the vessels in constructs were calculated using the AngioTool software, with greater vessel length seen in ANGPT1- and VEGF- expressing grafts compared to the controls. Images of hematoxylin and eosin (H&E) stains of transplanted grafts indicated they were perfused and functional comparable to physiological vessel density of the surrounding native muscle by day 14. Muscle fibers formed around and inside the graft area within the same timeline, covering a larger area in the test grafts compared to the controls to indicate superior myogenesis.