Long thought to suppress cancer by slowing cellular metabolism, the protein complex AMPK also seemed to help some tumors grow, confounding researchers. Now, Salk Institute researchers have solved the long-standing mystery around why AMPK can both hinder and help cancer.

The lab of Salk Professor Reuben Shaw showed that late-stage cancers can trigger AMPK’s cellular recycling signal to cannibalize pieces of the cell, supplying large lung tumors with the nutrients they need to grow. The work, which appeared in Cell Metabolism on November 8, 2018, suggests that blocking AMPK in some conditions could stop the growth of advanced tumors in the most common type of lung cancer.

“Our study shows that the same dysfunction in a genetic circuit that causes non-small-cell lung cancer to begin with is necessary for more mature tumor cells to survive when they don’t have enough nutrients,” says Shaw, director of the Salk Cancer Center and the paper’s senior author. “It’s exciting because not only does it solve a genetic ‘whodunnit,’ but it also points to a potential new therapeutic target for a cancer that is often diagnosed very late.”

AMPK acts as a fuel gauge for the cell, overseeing energy input and output to keep the cell running smoothly. Similar to a car sensor flashing a low-gas signal or turning off a vehicle’s AC to save energy, AMPK slows down cell growth and changes the cell’s metabolism if the cell’s fuel (nutrients) is low. Previously, Shaw discovered that AMPK could halt tumors’ revved-up metabolism, as well as restore normal function to the liver and other tissues in diabetics. 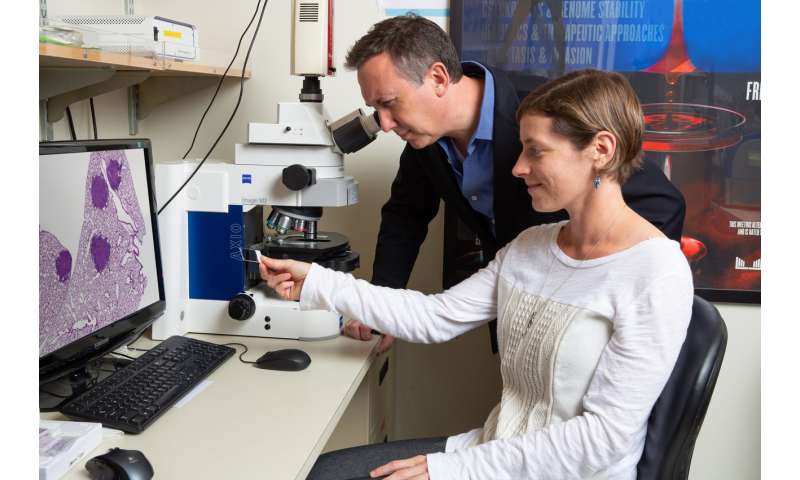 But the Shaw lab’s new work suggests that AMPK actually helps large tumors grow. In the current study, the team observed groups of mice with and without the AMPK fuel gauge to see how tumors developed.

“We found that tumors grew much more slowly when AMPK was not present,” says Research Associate Lillian Eichner, the paper’s first author. “That means that AMPK is not always functioning as a tumor suppressor, as we originally thought.”

The team analyzed which genes in tumor cells from the same mouse models were being activated under various conditions. One gene that was particularly active was Tfe3, which is known to activate cellular recycling. It turned out that when tumors became large enough that cells in the middle were too far from easy access to nutrients, AMPK signaled Tfe3 to initiate recycling of cellular materials as nutrients—effectively cannibalizing pieces of the cell—for the tumor to use.

“Previously we were focused on how we could activate AMPK,” says Eichner. “Now that we’ve identified this mechanism, we can shift to how to inhibit it in certain cancers.”