Generating Megakaryocytes and Platelets from Adipocytes

Adipocytes are specialized cells that store energy as fat, they are mainly comprised of adipose tissues. Adipocytes differentiate from mesenchymal stem cells; thus, they are part of the mesodermal lineage. 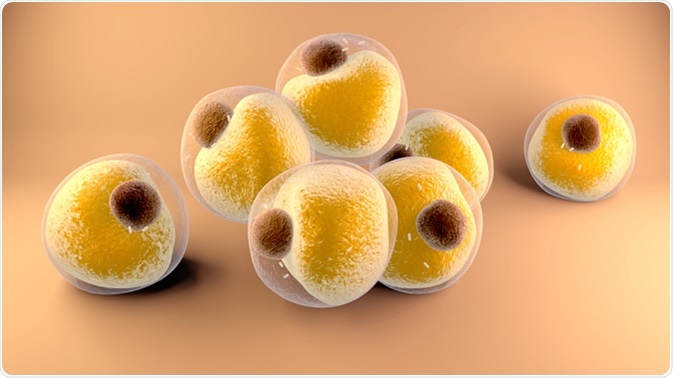 Platelets (also known as thrombocytes) are a crucial to blood clot formation. Defects with platelet regulation can lead to various different disorders and diseases such as thrombocytopenia.

Generating megakaryocytes and platelets from adipocytes

Adipose-derived stromal cells (ASCs) can be an effective source of platelets, as they don’t require any gene transfer; thus, differentiation is straightforward. This is because they already contain many important genes known for MK differentiation and platelet production. HSCs and iPSCs require recombinant thrombopoietin (rTPO) to differentiate into MKs, but ASCs do not, which is what makes them a more advantageous choice when trying to produce platelets. Although ASCs are promising, they contain heterogenous cells which makes them not completely viable as a donor-independent source of platelets.

Adipose-derived mesenchymal stem cells (ASCLs) can also be used to produce platelets. It has been shown that ASCLs that are cultured in MK lineage induction (MKLI) media will develop similar characteristics to cord-blood-derived MKs (expression of MK specific cell surface markers, CD41 and CD42b).

Tests were performed on ASCL-derived platelets (ASCL-PLTs) to ensure that they express the right cell surface markers and intracellular proteins to be used in transfusions. These tests showed that ASCL-PLTs express cell adhesion markers, which is important for the function of platelets.

MKs and platelets can be produced from many different cell progenitors. The production of platelets from ASCLs is promising because transfusion of these cells may be associated with lower risks than donor platelets.

Sam graduated from the University of Manchester with a B.Sc. (Hons) in Biomedical Sciences. He has experience in a wide range of life science topics, including; Biochemistry, Molecular Biology, Anatomy and Physiology, Developmental Biology, Cell Biology, Immunology, Neurology  and  Genetics.