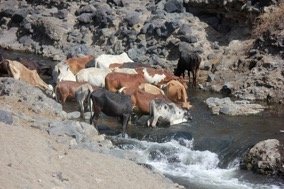 The bacterial infection leptospirosis is increasingly recognized as an important cause of fever in Africa. Now, researchers reporting in PLOS Neglected Tropical Diseases have analyzed the major risk factors for contracting leptospirosis and discovered that rice and cattle farming are associated with acute infection.

Leptospirosis, caused by bacteria of the genus Leptospira, causes a wide range of symptoms and can lead to serious complications include kidney and liver problems. In one study conducted in northern Tanzania, 8.8% of people with severe fevers had leptospirosis. Scientists know that animals can carry leptospirosis and lead to its spread throughout the environment or directly to humans. However, the major animal reservoirs and modes of transmission have not been well described.

In the new work, Michael Maze of the University of Otago, New Zealand, and colleagues enrolled people with fever from two hospitals in Moshi, Tanzania from 2012 through 2014. Each participant was tested for leptospirosis, and administered a survey on risk behaviors over the past 30 days, including exposure to livestock, rodents, and surface water.