An artificial mole as an early warning system

Alongside cardiovascular disease, cancer has become the top cause of death in industrialised countries. Many of those affected are diagnosed only after the tumour has developed extensively. This often reduces the chance of recovery significantly: the cure rate for prostate cancer is 32 percent and only 11 percent for colon cancer. The ability to detect such tumours reliably and early would not only save lives, but also reduce the need for expensive, stressful treatment.

Researchers working with Martin Fussenegger, Professor at the Department of Biosystems Science and Engineering at ETH Zurich in Basel, have now presented a possible solution for this problem: a synthetic gene network that serves as an early warning system. It recognises the four most common types of cancer—prostate, lung, colon and breast cancer—at a very early stage, namely when the level of calcium in the blood is elevated due to the developing tumour.

The early warning system comprises a genetic network that biotechnologists integrate into human body cells, which in turn are inserted into an implant. This encapsulated gene network is then implanted under the skin where it constantly monitors the blood calcium level.

As soon as the calcium level exceeds a particular threshold value over a longer period of time, a signal cascade is triggered that initiates production of the body’s tanning pigment melanin in the genetically modified cells. The skin then forms a brown mole that is visible to the naked eye. 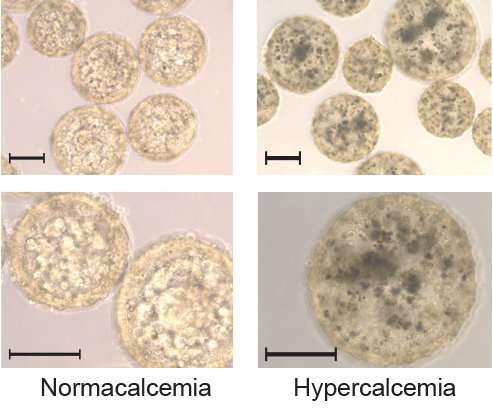 The mole appears long before the cancer becomes detectable through conventional diagnosis. “An implant carrier should then see a doctor for further evaluation after the mole appears,” explains Fussenegger. It is no reason to panic. “The mole does not mean that the person is likely to die soon,” stresses the ETH professor. It simply means that clarification and if necessary treatment are needed.

The researchers used calcium as the indicator of the development of the four types of cancer, as it is regulated strongly in the body. Bones serve as a buffer that can balance out concentration differences. However, when too much calcium is detected in the blood, this may serve as a sign for one of the four cancers.

“Early detection increases the chance of survival significantly,” says Fussenegger. For example, if breast cancer is detected early, the chance of recovery is 98 percent; however, if the tumour is diagnosed too late, only one in four women has a good chance of recovery. “Nowadays, people generally go to the doctor only when the tumour begins to cause problems. Unfortunately, by that point it is often too late.”

The implant also has an additional advantage: “It is intended primarily for self-monitoring, making it very cost effective,” explains the ETH professor. However, for those who would prefer not to deal with the constant stress, an implant can also be used that develops a mark visible only under a red light. “This regular check could be carried out by their doctor.”

The disadvantage is that the service life of such an implant is limited, as Fussenegger has found in literature. “Encapsulated living cells last for about a year, according to other studies. After that, they must be inactivated and replaced.”

So far, this early warning implant is a prototype; the associated work recently published in the journal Science Translational Medicine is a feasibility study. The researchers have tested their early warning system in a mouse model and on pig skin. It functioned reliably during these tests. Moles developed only when the calcium concentration reached a high level.

The Basel-based scientists still have a long way to go before human testing can begin. “Continued development and clinical trials in particular are laborious and expensive, which we as a research group cannot afford,” says the ETH professor. However, he would like to promote the translation of his developments, so that one day they will lead to applicable products. He estimates that bringing such a cancer diagnosis implant to market maturity will take at least ten years of research and development.