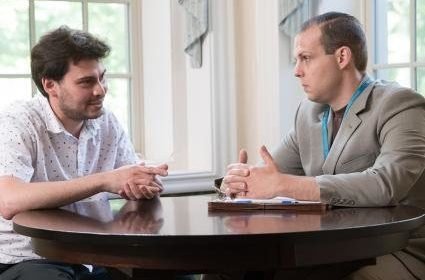 McLean Hospital researchers have completed a study that sought to determine which individuals with depression are best suited for antidepressant medications. Their findings, published in Psychological Medicine on July 2, 2018, have led to the development of a statistical algorithm that identifies patients who may best respond to antidepressants—before they begin treatment.

Christian A. Webb, Ph.D., director of the Treatment and Etiology of Depression in Youth Laboratory at McLean Hospital, is one of the study’s coauthors, along with Diego A. Pizzagalli, Ph.D., director of McLean’s Center for Depression, Anxiety and Stress Research. Webb explained how their paper, “Personalized Prediction of Antidepressant v. Placebo Response: Evidence from the EMBARC Study,” grew from data derived from a large and recently completed multi-site clinical trial of antidepressant medications called Establishing Moderators and Biosignatures of Antidepressant Response in Clinical Care (EMBARC). Demographic and clinical characteristics of individuals who took part in the EMBARC study were collected prior to the start of treatment by the study team across four sites (Columbia University, Massachusetts General Hospital, the University of Michigan, and UT Southwestern Medical Center). Participants were also administered computer-based tasks.

The results, Webb said, were like many previous clinical trials in that “we found relatively little difference in average symptom improvement between those individuals randomly assigned to the medication vs. placebo.” However, he explained, “for the one-third of individuals predicted to be better suited to antidepressants, they had significantly better outcomes if they happened to be assigned to the medication rather than the placebo.” The latter group of patients were characterized by higher depression severity and negative emotionality, were older, more likely to be employed, and exhibited better cognitive control on a computerized task.

“These results bring us closer to identifying groups of patients very likely to benefit preferentially from an SSRI and could realize the goal of personalizing antidepressant treatment selection,” added UT Southwestern Medical Center’s Madhukar Trivedi, MD, coordinating principal investigator for the EMBARC study.

Building on these findings, Webb said, his team is now looking to adapt the algorithm for use in “real-world” clinics. Specifically, he reported, the researchers are looking to collaborate with the University of Pennsylvania on a study that would test the algorithm in psychiatric clinics treating individuals suffering from depression by comparing two or more viable treatments—for example, two different classes of antidepressants, or antidepressants vs. psychotherapy.