A much less invasive way to monitor pressure in the brain 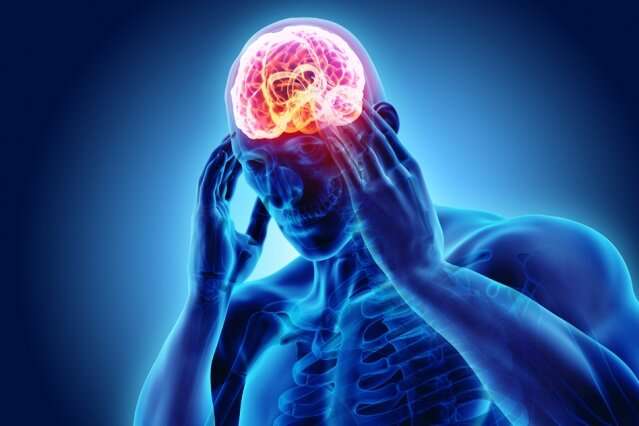 Traumatic brain injuries, as well as infectious diseases such as meningitis, can lead to brain swelling and dangerously high pressure in the brain. If untreated, patients are at risk for brain damage, and in some cases elevated pressure can be fatal.

Current techniques for measuring pressure within the brain are so invasive that the measurement is only performed in the patients at highest risk. However, that may soon change, now that a team of researchers from MIT and Boston Children’s Hospital has devised a much less invasive way to monitor intracranial pressure (ICP).

“Ultimately the goal is to have a monitor at the bedside in which we only use minimally invasive or noninvasive measurements and produce estimates of ICP in real time,” says Thomas Heldt, the W. M. Keck Career Development Professor in Biomedical Engineering in MIT’s Institute of Medical Engineering and Science, an associate professor of electrical and biomedical engineering, and a principal investigator in MIT’s Research Laboratory of Electronics.

In a study of patients ranging in age from 2 to 25 years, the researchers showed that their measurement is nearly as accurate as the current gold standard technique, which requires drilling a hole in the skull.

Heldt is the senior author of the paper, which appears in the Aug. 23 issue of the Journal of Neurosurgery: Pediatrics. MIT research scientist Andrea Fanelli is the study’s lead author.

Under normal conditions, ICP is between 5 and 15 millimeters of mercury (mmHg). When the brain suffers a traumatic injury or swelling caused by inflammation, pressure can go above 20 mmHg, impeding blood flow into the brain. This can lead to cell death from lack of oxygen, and in severe cases swelling pushes down on the brainstem—the area that controls breathing—and can cause the patient to lose consciousness or even stop breathing.

Measuring ICP currently requires drilling a hole in the skull and inserting a catheter into the ventricular space, which contains cerebrospinal fluid. This invasive procedure is only done for patients in intensive care units who are at high risk of elevated ICP. When a patient’s brain pressure becomes dangerously high, doctors can help relieve it by draining cerebrospinal fluid through a catheter inserted into the brain. In very severe cases, they remove a piece of the skull so the brain has more room to expand, then replace it once the swelling goes down.

Heldt first began working on a less invasive way to monitor ICP more than 10 years ago, along with George Verghese, the Henry Ellis Warren Professor of Electrical Engineering at MIT, and then-graduate student Faisal Kashif. The researchers published a paper in 2012 in which they developed a way to estimate ICP based on two measurements: arterial blood pressure, which is taken by inserting a catheter at the patient’s wrist, and the velocity of blood flow entering the brain, measured by holding an ultrasound probe to the patient’s temple.

For that initial study, the researchers developed a mathematical model of the relationship between blood pressure, cerebral blood flow velocity, and ICP. They tested the model on data collected several years earlier from patients with traumatic brain injury at Cambridge University, with encouraging results.

In their new study, the researchers wanted to improve the algorithm that they were using to estimate ICP, and also to develop methods to collect their own data from pediatric patients.

They teamed up with Robert Tasker, director of the pediatric neurocritical care program at Boston Children’s Hospital and a co-author of the new paper, to identify patients for the study and help move the technology to the bedside. The system was tested only on patients whose guardians approved the procedure. Arterial blood pressure and ICP were already being measured as part of the patients’ routine monitoring, so the only additional element was the ultrasound measurement.

Fanelli also devised a way to automate the data analysis so that only data segments with the highest signal-to-noise ratio were used, making the estimates of ICP more accurate.

The ICP estimates generated by this new technique were, on average, within about 1 mmHg of the measurements taken with the invasive method. “From a clinical perspective, it was well within the limits that we would consider useful,” Tasker says.

In this study, the researchers focused on patients with severe injuries because those are the patients who already had an invasive ICP measurement being done. However, a less invasive approach could allow ICP monitoring to be expanded to include patients with diseases such as meningitis and encephalitis, as well as malaria, which can all cause brain swelling.

“In the past, for these conditions, we would never consider ICP monitoring. What the current research has opened up for us is the possibility that we can include these other patients and try to identify not only whether they’ve got raised ICP but some degree of magnitude to that,” Tasker says.

“These findings are very encouraging and may open the way for reliable, non-invasive neuro-critical care,” says Nino Stocchetti, a professor of anesthesia and intensive care medicine at Policlinico of Milan, Italy, who was not involved in the research. “As the authors acknowledge, these results ‘indicate a promising route’ rather than being conclusive: additional work, refinements and more patients remain necessary.”

The researchers are now running two additional studies, at Beth Israel Deaconess Medical Center and Boston Medical Center, to test their system in a wider range of patients, including those who have suffered strokes. In addition to helping doctors evaluate patients, the researchers hope that their technology could also help with research efforts to learn more about how elevated ICP affects the brain.

“There’s been a fundamental limitation of studying intracranial pressure and its relation to a variety of conditions, simply because we didn’t have an accurate and robust way to get at the measurement noninvasively,” Heldt says.

The researchers are also working on a way to measure arterial blood pressure without inserting a catheter, which would make the technology easier to deploy in any location.