A cell atlas of the aging lung 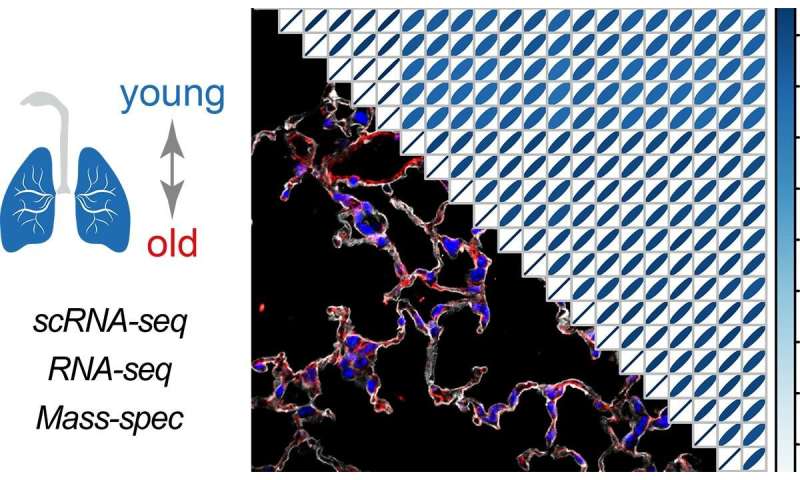 Aging promotes lung function decline and increases susceptibility to diseases of the respiratory tract. In order to understand these effects in detail, researchers at Helmholtz Zentrum München, a partner in the German Center for Lung Research (DZL), analyzed the aging process in the lung at single-cell level using AI approaches. They have now presented this Atlas of the Aging Lung in Nature Communications.

The lung is a highly complex organ in which a great number of very different cells have to work together to enable normal breathing and protection against infection. If a human lung with all its branches was spread out on the ground, it would cover an area of about 70m². When one then considers that the cells are only a few thousandths of a millimeter in size and are composed of about 40 different, highly specialized cell types, one can begin to understand the complexity involved in investigating processes that affect the entire lung. However, advances in technology have opened up new possibilities in this field for scientists.

“For the current study, we analyzed changes between young and aging lungs down to the single-cell level in a preclinical model,” explains Dr. Herbert Schiller. He is a DZL young investigator group leader at the Institute of Lung Biology and Diseases at Helmholtz Zentrum München and led the study together with Prof. Fabian Theis, Director of the Institute for Computational Biology. “This was made possible thanks to new single-cell analysis techniques. We were thus able to pinpoint gene activity in the individual lung cells and ascribe it to the changes in the corresponding gene products – i.e. to the proteins,” Dr. Schiller explains. In order to meaningfully collate and interpret all this data, the team relied on AI approaches: “The sheer mass of data is hard for humans to analyze. That’s why we develop algorithms to help us to recognize the structure of the data and the biological regulations hidden within it,” Fabian Theis notes.

The study showed that, with increasing age, the genes in the cells no longer behaved in a synchronized manner. “Whereas in younger lungs a particular cell type will control the gen activity very precisely, the gene activity of older lung cells, and thus also their identity, is less constant,” Herbert Schiller explains. The scientists are working on the assumption that cells lose epigenetic control during the aging process, which results in different gene activities. Moreover, they demonstrated that certain metabolic pathways in lung cells are altered with increasing age.

But changes also occur outside the cells: “The structure of the so-called extracellular matrix – in other words, the network of proteins surrounding the cells – changes with age,” Schiller explains. “This can, for example, alter the composition of the structural proteins known as collagens.” The scientists now hope to collaborate with their international peers in order to verify the findings of their current study in the human body. “Lung diseases account for every sixth death worldwide,” Herbert Schiller notes. “In order to counter them, we must understand how the lung changes in the course of a lifetime and identify areas where therapeutic intervention may be possible.”

The current study is also a pioneering project for the Human Cell Atlas (HCA). This is a sort of Google maps of the human body, the purpose of which is to chart all the cells and tissues at different times to build a reference database of the normal healthy condition, which promises tremendous importance for the development of personalized medicine. Fabian Theis plays a leading role in this, and Herbert Schiller focuses specifically on lung-related issues within the HCA consortium and has also co-authored the corresponding white paper for the Human Cell Atlas. In the next phase, the relevant data for human cells will have to be collected and integrated in the project in order to advance progress in basic and applied research.