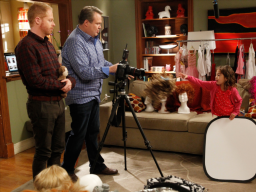 Former Modern Family star and new dad Jesse Tyler Ferguson went on The Ellen DeGeneres Show Tuesday to talk about his new cookbook, Food Between Friends, and life as a parent. Ferguson, who welcomed a baby boy named Beckett last summer with his husband, Justin Mikita, joked about how the pair are going to raise Beckett as though hew as gay until he let them know otherwise. 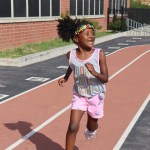 And by the way, whether he is joking or not, raising a gay baby is the same as raising a straight baby because babies don’t date.

The actor talked about how his family spends a lot of time listening to music, which prompted this announcement about his parenting intentions.

“It’s a lot of show tunes because that’s what I like, so we’re raising him gay until he decides he’s straight,” Ferguson told Ellen. “On the way back from the hospital, we played Britney Spears … so that was his first exposure to music.” Ferguson said that he and Mikita spend a lot of time singing to Beckett, much of which is improv based on what they’re doing (i.e. diaper changes), which is both adorbs and good for the developing brain of a baby.

But, we all know babies grow up into their own people eventually, and just as gay kids are born to straight parents, the opposite may be true here.

“Justin and I were saying, we can just tell he’s gonna be such a straight kid,” Ferguson told DeGeneres. “Who knows? He can do whatever he wants. I have a feeling he’s gonna wanna play football. I can just tell. I’m gonna have to learn how to do all those things.”

Ellen also asked the funny dad what new parenthood was like and how he was enjoying it. “We’re still figuring out his personality,” Ferguson said. “It’s a new person in your life, and just like anyone new that comes into your life, you’ve gotta figure out if you like them. It takes a little time.”

In addition to singing, Ferguson spends a lot of time reading to Beckett. His favorite is a book called The Hips on the Drag Queen Go Swish Swish Swish by Lil Miss Hot Mess.

We can tell, based on Ferguson’s interview and the videos he shares on TikTok that he’s a great dad. And not for nothing, but we kind of hope we get to see Ferguson teach his son how to play football when he grows up regardless of his sexual orientation.

Our mission at SheKnows is to empower and inspire women, and we only feature products we think you’ll love as much as we do. Please note that if you purchase something by clicking on a link within this story, we may receive a small commission of the sale.

Looking for more book suggestions for your kids? Try one of these…