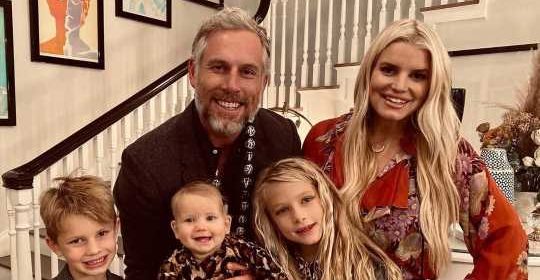 There’s a first time for everything! From Kim Kardashian’s son Psalm to Jessica Simpson’s daughter Birdie, these celebrity babies celebrated their first Thanksgivings on Thursday, November 28.

The Keeping Up With the Kardashians star, 39, posted a picture of her husband, Kanye West, and their 6-month-old during the holiday, writing, “So Thankful for my babies.”

In the sweet father-son shot, the rapper, 43, gazed down at his baby boy. The little one looked back at his dad while wearing a cozy outfit and a white bib.

The KKW Beauty creator went on to share a photo of herself with the rest of her and the Grammy winner’s children — North, 6, Saint, 3, and Chicago, 22 months. “So thankful for all of my babies,” she captioned the social media upload.

Each member of the makeup mogul’s brood has a unique personality, she revealed in her September Vogue Arabia cover story. The Selfish author called North “creative and expressive,” noting that her son has “more” of her personality.

The E! star added at the time: “[Chicago] has a temper that we don’t have, but then she’s so calm, which is just like us. For Psalm, it’s too early to tell. Hopefully, they will have little bits of us and lots of themselves.”

As for Simpson, 39, the fashion designer and her husband, Eric Johnson, celebrated the holidays with Maxwell, 7, Ace, 6, and Birdie, 8 months.

“Getting a family pic on Thanksgiving was a task, but we did it before the pajama change for the car ride home!!” The “These Boots Are Made for Walking” singer wrote on Instagram. “I woke up this morning with the continued warm and cozy feeling of gratitude. Hope everyone had a blessed Thanksgiving!”

The former reality star’s youngest was all smiles in her dad’s arm, wearing an animal-print top and black pants.