Dads Taking Six Months of Parental Leave? It's Not a Fairy Tale, It's Just Sweden

Want to see a rare exhibit of photographs, featuring creatures you’ve only heard about in hushed rumors? The Swedish Embassy in Washington, D.C., is ready to hook you up. Hint: It’s not unicorns. It’s not even wee Scandinavian fairy folk in pointy hats. It’s an exhibit of photographs of ordinary Swedish dads, simply taking advantage of Sweden’s generous parental leave policy. Really.

The Washington Post reported on the exhibition, now at the Swedish Embassy after touring 65 countries. The exhibition has a humble name — “Swedish Dads” — but the subject matter packs a punch. It’s the brainchild of Swedish photographer Johan Bävman, who completed a series of portraits of 45 fathers who opted to stay home with their child (or children) for at least six months — and could, due to the exceptionally humane, family-friendly paid leave policy of Sweden. 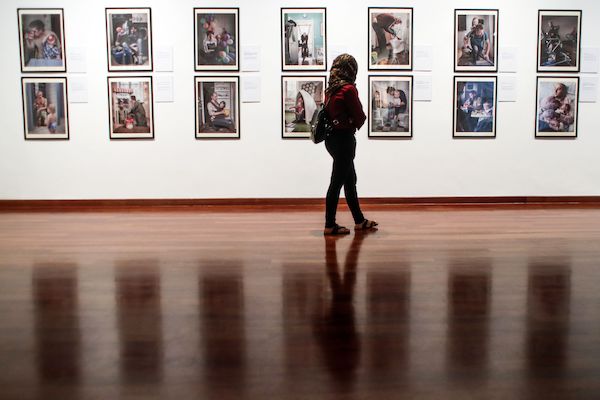 The Swedish Embassy’s hosting of the exhibition is the first time that “Swedish Dads” has been displayed in the United States — a country arguably most in need of these images. The photos are simple but potent, showing dads herding toddlers into a stroller for a walk, or imploring them to try a bite of food, or bathing a baby in a sink. Generally speaking, the photos simply reveal fathers doing the kind of work we’re used to seeing mothers do, and there’s serious emotional resonance in the unexpected gender stereotype swap.

Bavman hopes his photographs will speak to parenting that embraces gender equality — with the help of a society and a government that also cares about every parent in a family. It seems like a tall order for those of us in the United States, but in Sweden, it’s working.

Bavman also wrote of his work at his website, “In spite of this generous [parental leave] allowance… only a fraction of Sweden’s fathers use all their days of parental leave. Only fourteen percent of parents choose to share the days equally.”

He continued, “With this project, I want to find out why these men have chosen to stay at home so much longer than the majority of Swedish dads. What has it done for them, how have their relationships with their partner and their child changed, and what expectations did they have before taking parental leave?’

The Washington Post spoke with one of the fathers featured, Samad, an engineer. He took four months off at the same time as his partner, then six months on his own to care for his twins, Leia and Parisa. “I had to argue with my partner to get my months with the children, because I think it’s important that the children have a father figure who’s there from the start… That’s also why it was important to me to get the opportunity to take as much paternity leave as I wanted,” Samad said.

You can see the series of photos here. There’s also a short film on YouTube about Bävman and his inspiration for “Swedish Dads.” It was made by Moa Karlberg of the Swedish Institute. In the film, Bavman speaks of his wish to “be part of his children’s emotional space” by staying home with his own children when they were young:

Bävman’s work can also be found on Instagram, either on his feed or tagged under his name. Here’s a shot from one of his dad shoots, posted on his Instagram page:

Manfred seems to make everyone in Germany smile a little bit extra. Could be something to do with his name or just his appearance . #swedishdadsontour

And many of the exhibition images can be found on Twitter and elsewhere online. And? You can even buy the book version.