The Other Brain Cells: New Insights into What Glial Cells Do

Overall, there are roughly the same number of glia to neurons. The main glial cells within the nervous system are astrocytes, oligodendrocytes, microglia, ependymal cells, and Schwann cells. Each of these cell types has a particular role in supporting and protecting neurons.

In this article, the different roles of some of the main cell types in both health and disease will be discussed. 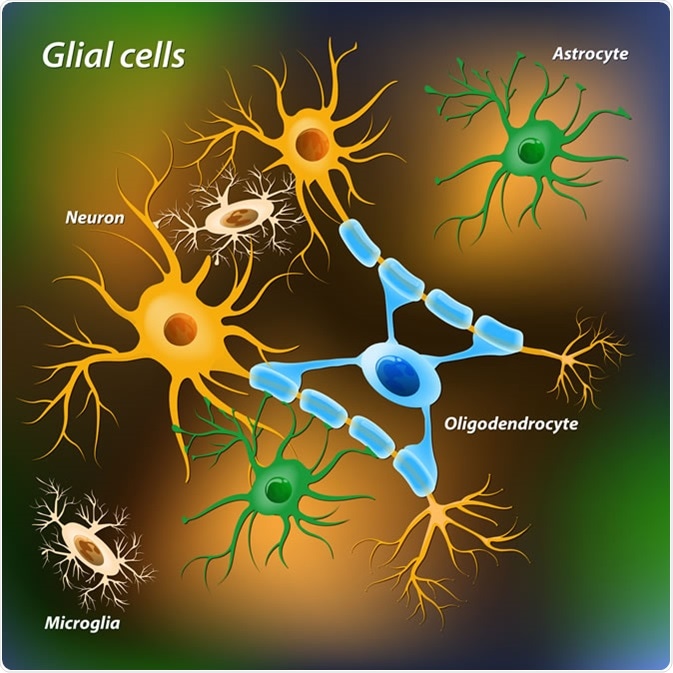 Astrocytes are ‘star-shaped’ cells and are one of the most abundant types of glial cell within the brain. They are amongst the most studied cell type of the brain, and as such some of their functions are well established.

Astrocytes are involved in the maintenance of water and ion homeostasis, form part of the tripartite synapse, and contribute to blood-brain-barrier (BBB) maintenance by their end-feet processes.

Mice suffered from a loss of neuronal axons, which was accompanied by the paralysis of all the limbs. The BBB remained intact, and the cause of the dysfunction was attributed to the failure to buffer reactive oxygen and nitrogen species (ROS & NOS).

Astrocytes, therefore, are critical in the maintenance of neuronal health and integrity by dealing with reactive species. It is important to note that whilst a large subset of astrocytes express GFAP, not all astrocytes do so e.g. grey matter astrocytes. Therefore, targeting all astrocytes in this fashion is difficult.

Astrogliosis refers to when astrocytes react to a pathological state within the brain where astrocytes undergo morphological and functional changes. Morphologically, astrocytes display hypertrophy (enlargement) of both their cell bodies and their processes.

Reactive astrocytes secrete large volumes of pro-inflammatory signals such as TNFa and IL-1, which recruit immune cells. In lesions, astrocytes elongate along the core and form a glial scar. Specific ablation of proliferating astrocytes in models of spinal cord injury have revealed that 7-days post crush injuries, without proliferating astrocytes, there was greater cell death and more inflammation.

A similar study focusing on the brain found more severe damage. Therefore, these studies strongly suggest a crucial protective role of astrocytes in both health and in disease or injury, in which there is exacerbation of damage without proliferating astrocytes.

Oligodendrocytes are large glial cells that produce the myelin sheath that insulates neuronal axons within the central nervous system (whereas Schwann cells produce myelin in the peripheral nervous system). 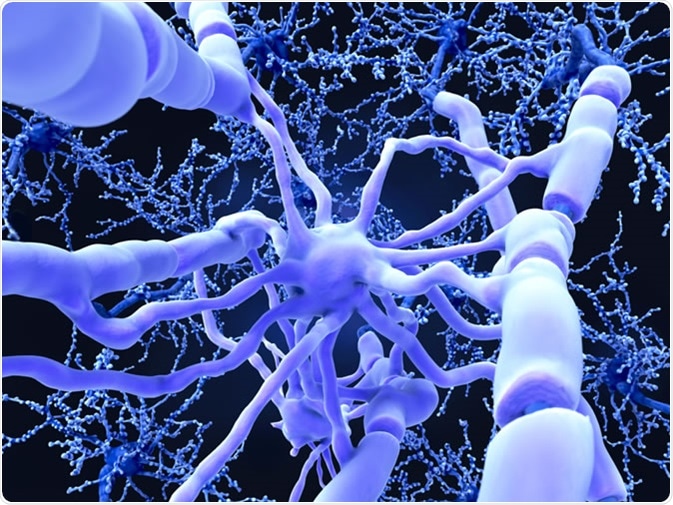 The myelin sheath is what allows the exceptionally fast speed of action potential propagation in mammals (saltatory conduction).

A single oligodendrocyte can extend its processes up to around 50 separate axons to form a 1 μm thick myelin sheath around each axon. This is different to Schwann cells, which can only wrap around one axon only. Multiple oligodendrocytes form different levels of myelin segments across different axons. Oligodendrocytes also support neurons by providing trophic support in the form of GDNF, BDNF, and IGF-1.

Oligodendrocytes form from NG2 expressing cells, which are precursors to mature oligodendrocytes and are considered separate cell types. These cells are expressed in adult brains and serve to keep generating oligodendrocytes, and as such, are the most highly proliferative ‘stem-cell’-like cell within the adult brain.

Mature oligodendrocytes have well established functions, but NG2 cells also give rise to other non-myelinating cells that are also sparsely dotted across specific brain regions. Specific ablation of NG2 cells results in the fast and efficient repopulation, but with no further ill effects. However, the speed and efficiency of repopulation declines with ageing.

Inducing apoptosis in NG2 cells (by deleting the cell cycle protein Esco2 driven by Sox10 promoter) led to a 90% reduction of NG2 cells, which then led to a depletion of oligodendrocytes.

Specific depletion of oligodendrocytes in mice results in the elongation of the nodes of Ranvier (gaps within myelin that allow saltatory conduction) coupled to a deceleration of conduction velocity and subsequent motor deficits analogous to Multiple Sclerosis (MS), which is a demyelinating disorder. Therefore, NG2 cells are constantly producing mature oligodendrocytes throughout life and this is critical to the functioning of myelin in the nervous system.

Furthermore, DTA toxicity specific to oligodendrocytes leads to a 50% reduction in oligodendrocytes and the development of autoimmune attacks against myelin and axonal damage (as seen in MS). However, due to the presence of NG2 cells, remyelination occurs in most of these models.

Microglia are the brain’s resident immune cell (macrophage), and act as the first responder in immune defence in the central nervous system. Microglia account for 10-15% of all the cells within the  brain and are primarily involved in brain maintenance by scavenging for plaques, damaged/excessive neurons and synapses (especially during development), as well as infectious agents. 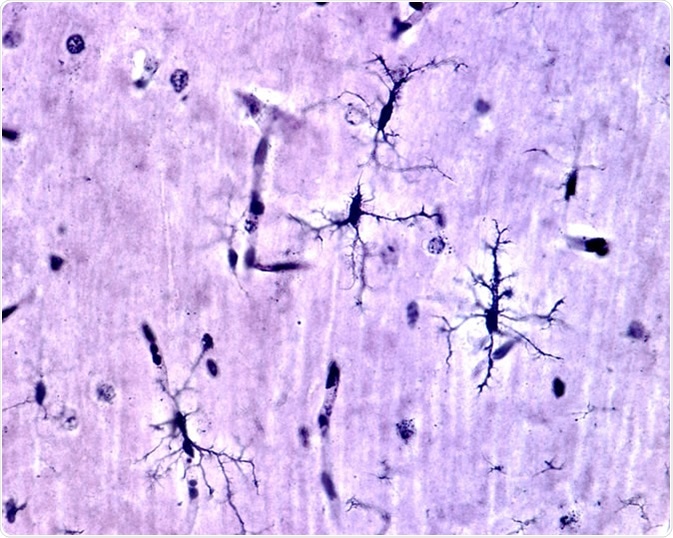 Microglia cells stained with silver carbonate method in the grey matter of the brain. This type is the ramified or "resting" microglia that appears in normal brain tissue. – Image Credit: Jose Luis Calvo / Shutterstock

Resting microglia have a ramified appearance with small cell bodies and long branching processes that do not phagocytose cells or secrete immune factors.

Upon activation they become reactive (upregulation of Iba1) and can adopt an amoeboid state that is characterised by a large cell body with antigen presentation (like macrophages) and with thicker retracted branches.

Recent studies have revealed more roles for microglia aside from being immune cells. Microglia have roles in synaptic pruning, where microglial processes dynamically interact with developing synapses undergoing remodelling.

During development, spines change their sizes upon microglial contact in which spines contacted by microglia tended to be smaller and no longer present in later imaging sessions.

This phenomenon is thought to be mediated by complement cascade proteins C1q and C3, which are localised to synaptic compartments.

Animal models of neuropsychiatric disorders have also revealed a role for microglia in the onset and/or progression of behavioural symptoms.

In the MECP2 null mouse model of Rett syndrome (ASD) and the Hoxb null model of OCD, transplantation of WT bone marrow into irradiated hosts resulted in the bettering of behavioural symptoms. This was due to the colonisation of the CNS with bone-marrow derived microglial-like cells.

In rodent models of maternal immune activation (early life infection in utero) developing phenotypes associated with schizophrenia and memory/learning deficits all display changes to microglia including their activation state and numbers in a brain region specific manner.

These studies suggest that microglia may be primed prenatally during developmental stressors and make neuropsychiatric diseases more susceptible in later life.

Glial cells are more than simply support cells for neurons as previously thought. Rather, glia are required at all stages in life for neurons to develop, migrate, and differentiate during development, but to also ensure that neurons are protected (microglia), supported metabolically (astrocytes) and insulated (oligodendrocytes).

Glial dysfunction is now known to be a key pathological hallmark in various neurological and neuropsychiatric disorders, and targeting glial dysfunction may be a potential therapeutic strategy. Of course, there are many other functions of glial cells that are not discussed in this article, but have been discussed in depth elsewhere (see references).