April 25 marks World Malaria Day, an international event commemorated every year in recognition of global efforts to control malaria, one of the world’s oldest and deadliest diseases. This year’s theme, “Ready to beat Malaria”, underscores the collective goal and commitment of the global malaria community. In a recent review published in Open Biology, David Baker, Professor of Malaria Parasite Biology at the London School of Hygiene & Tropical Medicine discusses the issue of drug resistance in combating malaria and a promising molecular pathway that can help tackle this.

Although there have been considerable reductions in the number of clinical cases of malaria and resulting deaths over the last 20 years, more than 400,000 people still die each year from malaria; most of these are infants in Africa. One of the main challenges in tackling malaria is the development and spread of drug resistant malaria parasites. As resistance to each new malaria drug arises, it becomes necessary to combine two or more component drugs to slow the spread of resistance. The main drug currently recommended for malaria treatment relies on combinations containing an artemisinin derivative. Artemisinin is a drug derived from a plant that acts very quickly against malaria. A Chinese scientist, Tu Youyou, received a Nobel Prize in 2015 for her work on discovery of this drug in the 1970s. Almost inevitably, treatment failures with artemisinin combinations are becoming more widespread, especially in parts of southeast Asia.

Therefore, it is urgent that new antimalarial drugs are developed to avoid the resurgence of malaria that would result if artemisinin-based treatments failed. There are several promising new antimalarials undergoing clinical trials, but the Medicines for Malaria Venture (MMV) have estimated that only 8% of candidates undergoing formal preclinical testing, will actually make it to the clinic. With such a high rate of attrition, it is important that alternative targets and biochemical pathways in the malaria parasite (Plasmodium species) are explored to attempt to develop future generations of antimalarial drugs that will be required to continue and expand the success of malaria elimination programmes in affected countries. 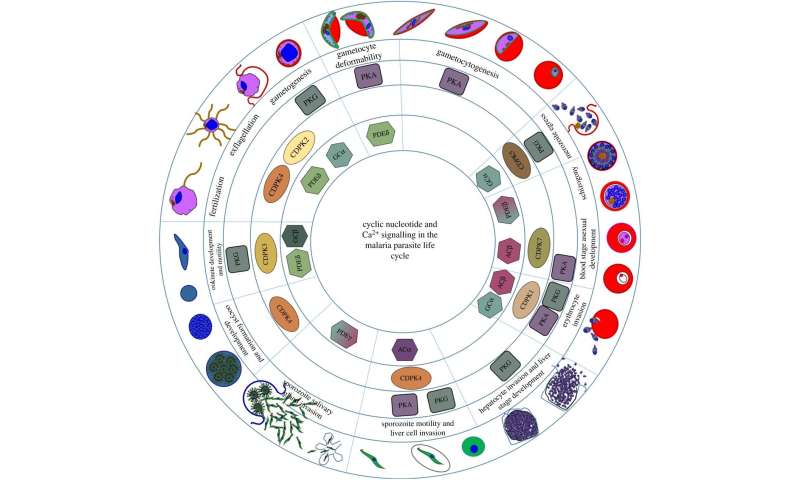 One such biochemical pathway that is being explored by David Baker’s team at the London School of Hygiene & Tropical Medicine (LSHTM) is called the cyclic nucleotide signalling pathway. This is actually two closely related pathways in which the intracellular messenger molecules cyclic AMP (cAMP) and cyclic GMP (cGMP) are the central players. These molecules are present in virtually all forms of life including humans and malaria parasites, and have very varied functions in all animal species. These molecules are not themselves the prospective drug targets, but the enzymes that synthesise or break them down or are activated by them are the targets because these enzymes differ significantly in humans and malaria parasites. Therefore, a drug designed to block the activity of the parasite version of the enzyme will not affect the human enzyme, making the drug safe.