Parent who listens can help kids thrive despite trauma 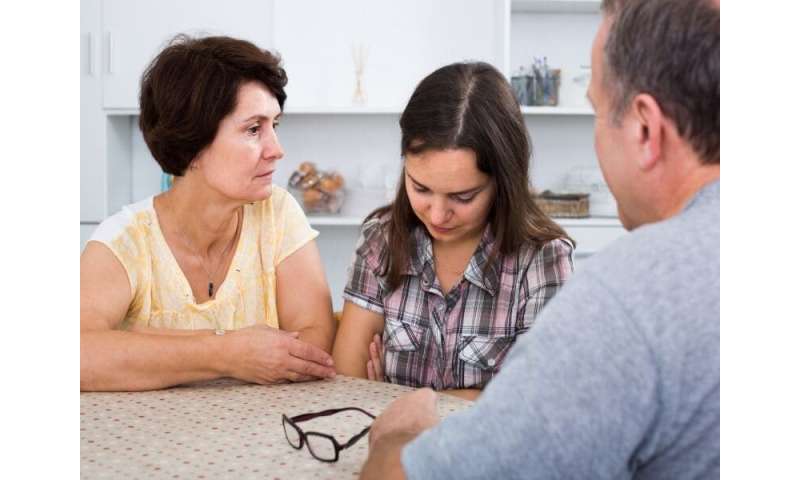 (HealthDay)—Heartfelt talks between parent and child are essential to help kids overcome tough times and do their best at school, a new study says.

Traumatic events in a kid’s life can cause the child to neglect school work and increase the odds that they’ll wind up repeating a grade, researchers found.

But having even one parent lend a kind and caring ear appears to help kids work past the toxic stress caused by those events, resulting in better performance at school, according to the study.

A sympathetic parent has a stronger impact on a troubled child’s educational performance than whether they eat regular family meals or live in a safe and well-kept neighborhood, said lead researcher Dr. Angelica Robles. She’s a pediatrician with Novant Health Developmental-Behavioral Pediatrics in Charlotte, N.C.

They found that adverse childhood events could seriously affect a child’s interest in school—among them domestic or neighborhood violence, economic hardship, substance abuse or mental illness in the home, the death or incarceration of a caregiver, and divorce or separation of parents.

However, researchers found that positive engagement with a caring parent could go a long way in offsetting the damage caused by life.

A caring parent increased by sixfold a child’s likelihood of completing homework and being engaged in school, and nearly doubled the odds that the kid would never have to repeat a grade. The findings were published online July 8 in the journal Pediatrics.

“A child who had experienced trauma in their life was able to do so much better in school if they said their parent cared about them and that they could talk about things together,” said Dr. Rebecca Dudovitz, an assistant professor of pediatrics with UCLA’s David Geffen School of Medicine. She wrote an editorial that accompanied the study.

A caring parent mattered much more than any other factor in either the home or the neighborhood, researchers found.

For example, having five or more family meals a week only made it about a third more likely that a child would do their homework and care about school, results showed.

“We thought regular family meals would be protective, and they were slightly, but what is more important is if during that meal do you have a conversation or do you have the TV on?” Robles said.

A safe neighborhood that is well-kept also had some protective effect for kids, as did supportive neighbors and nearby amenities like parks and community centers, researchers found. None came anywhere near the benefit from having a parent who listens, however.

Other studies also have shown that having any caring adult in their lives will improve a child’s chances of success, even if it’s just a neighbor, Dudovitz said.

“There’s a lot of studies to suggest that even relationships with people who are not the parents make a huge difference,” Dudovitz said. “Just being able to cite that you have a caring older adult in your life is associated with a whole host of positive health outcomes for kids.”

For example, studies have shown that a positive relationship with a teacher or coach can reduce a kid’s risk of substance abuse, she said.