When cancer has started to spread from its original location, it is called metastatic cancer. Metastatic lung cancer denotes a lung cancer that has begun to spread. Metastasis is the process by which cancer cells detach themselves and travel through the body via the bloodstream or lymph system. 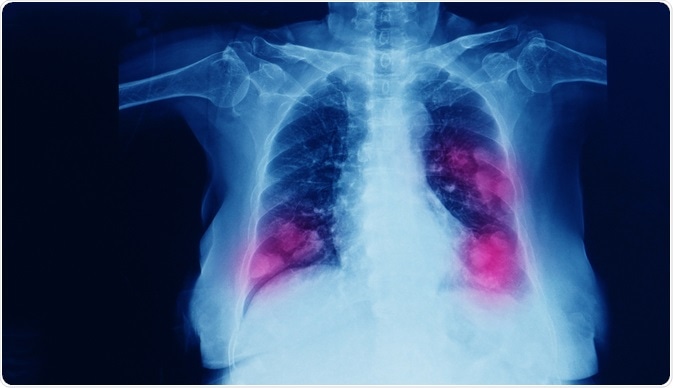 Metastasis does not usually occur early on, with most metastatic lung cancers being stage 3 or 4. The spread of cancerous cells to other areas of the body typically starts with the invasion of nearby areas, such as from one part of the lung to the other. When this occurs, it is referred to as local metastasis.

In more extreme cases, cancer cells can travel through the lymph nodes to other parts of the body. This can lead to the formation of secondary tumors in other organs. When this occurs, it is known as distant metastasis. Spread via the lymph system typically takes longer than spread via the bloodstream.

There are four general steps to metastatic lung cancer: tumor establishment, vascular invasion, extravasation, and creation of the distant metastatic focus. The first of these, tumor establishment, focus on the growth of the tumor, including organizing vascular supply, escaping the immune system, and movement. Once established, the cells of the primary tumor can adopt a different morphology to facilitate movement to new metastatic centers.

After having entered the lymph or blood system, the cancer cells need to escape circulation and establish themselves. However, the process by which this is done is not well understood. It is believed that blood flow must be reduced to allow the tumor cells to express adhesion molecules, which then find their specific receptors. The cells then poke holes between endothelia to facilitate migration out of the lumen of the vessel.

Not many tumor cells survive the process of moving in the circulatory system, and even fewer successfully establish metastatic nodules. There are many outstanding questions about when metastasis occurs, if the cells move randomly or how the homing mechanisms work. The establishment of the distant metastatic focus differs depending on the location of the new site, and there is therefore no general mechanism in metastatic lung cancers.

Metastatic lung cancer can be difficult to treat since it is a sign that cancer has spread. Removal of visible tumors does not usually improve the treatment outcome. Instead, chemotherapy is the most common treatment used.

If the metastatic lung cancer is local, surgery can be an option and can lead to full recovery and cure, but this is rare otherwise. Other treatment options include radiation therapy, placing stents in the airways, and laser therapy.

Sara is a passionate life sciences writer who specializes in zoology and ornithology. She is currently completing a Ph.D. at Deakin University in Australia which focuses on how the beaks of birds change with global warming.