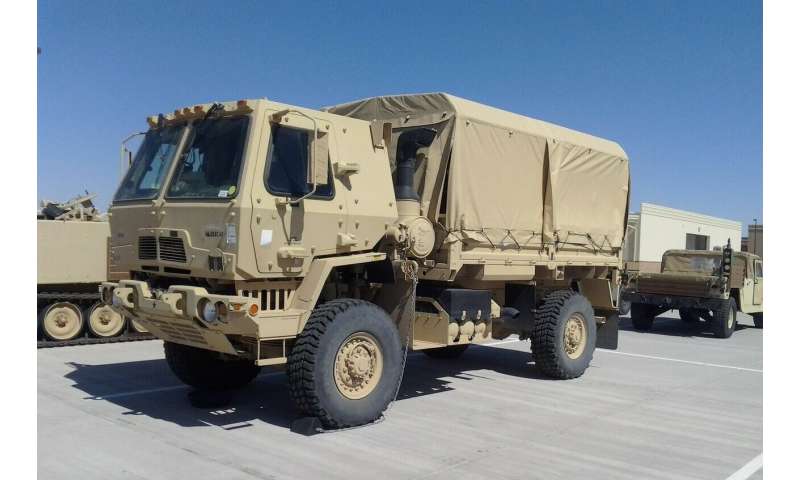 Living in a warzone is linked with an increased risk of heart attack and stroke among civilians, even years after the conflict ends, a study has found.

The findings come from the first systematic review of the effects of armed conflict on heart disease risk, carried out by researchers at Imperial College London and the London School of Hygiene & Tropical Medicine.

In the review, published in the journal Heart, the team re-analysed data from a number of studies on associations between armed conflict and the health of civilian adults of armed conflicts on civilian adults in low- and middle-income countries—including Syria, Lebanon, Bosnia, Croatia, Palestine, Colombia and Sudan.

They found that conflicts were associated with a litany of negative health outcomes for civilians, including increased risk of coronary heart disease, stroke, diabetes, increased blood pressure and cholesterol, as well as increased alcohol and tobacco use.

Beyond the immediate impacts of conflict, such as blast injuries, infectious diseases or malnutrition, the researchers cite longer-lasting health risks for civilians which may be due to multiple factors, including disruptions to healthcare services, putting them at greater risk of heart disease in the medium to long term.

The team say the findings could help inform international health policy in the prevention of heart disease in politically unstable countries where conflict is taking place, or likely to occur. They also offer recommendations, including prioritising primary healthcare during and after conflicts and training healthcare professionals to focus on both the cheapest and effective ways to prevent heart disease, such as prescribing generic medicines instead of branded ones and helping people to quit smoking.

“This is the first review of its kind to examine the links between armed conflict and the risk of heart disease among civilians” said first author of the study, Dr. Mohammed Jawad, from Imperial’s School of Public Health. “Because of the nature of war, data is often scarce and patchy, but our study shows evidence of a link between armed conflicts and increased deaths from heart disease and stroke.”

In the latest review, the team carried out a literature search, trawling science publication libraries to look at a total of 65 studies incorporating 23 armed conflicts. The studies included in the review focused on cardiovascular disease and its risk factors. Along with figures for prevalence and death rates, they also reviewed study data on cholesterol levels and blood pressure—as well as behavioural data on alcohol and tobacco consumption.

In one example, researchers included studies looking at the causes of death before and after the 2003 US-led invasion of Iraq. Data collected from household surveys showed the rate of deaths from heart attack or stroke increased significantly, from 147.9 per 100,000 people before the invasion to 228.8 per 100,000 post-invasion. In a similar study, heart disease was the principal cause of about half of non-violent deaths during the US-led invasion of Iraq.

The review was unable to identify clear mechanisms underlying the findings, but these are likely to be complex and numerous.

According to the researchers armed conflict could potentially impact chronic health conditions through two main mechanisms: Firstly, the direct effects of living in a conflict zone itself can increase stress and anxiety, leading to higher blood pressure, as well as worsening risk behaviours such as drinking more alcohol and smoking more.

Professor Christopher Millett, a Professor of Public Health at Imperial and senior author of the paper, said: “The experience of armed conflict, be it specific traumatic events or displacement from your home, appears to place civilian populations at greater risk of increased blood pressure, alcohol use and smoking, which are established risk factors for heart disease. Even if civilians are willing and able to seek healthcare services during armed conflict, access is often limited due to hospital closures, road blockades, lack of available medications, and more.”

Overall, they found evidence that conflict is associated with increased coronary heart disease, cerebrovascular disease (stroke) and endocrine disease (such as diabetes). There was also evidence of increased alcohol and tobacco consumption, during and after conflict.

The researchers suggest that community-based healthcare models (where people access services through GP clinics) may be best positioned to deliver interventions, such as screening for underlying health conditions, prescribing preventative medicines (such as statins) or offering smoking cessation and alcohol reduction programmes, in conflict and post-conflict situations. They add that training healthcare professionals in affected regions should be a priority, enabling them to deliver cardiovascular disease prevention and control measures once a conflict has ended.

Dr. Jawad highlights that the findings are limited, with two-thirds of the 65 included studies being of ‘low quality’, and that this may be in part due to the nature of data collection during times of conflict—with civilians and health services failing to register deaths, or their causes. However, study findings were largely consistent when the researchers restricted their analysis to higher quality studies. They add that evidence for links between armed conflict and other health outcomes is lacking, but more, better-designed studies could help.

The review also found a number of gaps in the literature, including a lack of studies from the Middle East, or about refugees. Refugees in particular are exposed to a “double burden—the impact of the armed conflict itself, and the impact of forced migration following armed conflict, so a better understanding of how wars affect their risk of different diseases is important.

Dr. Jawad added: “As conflicts are becoming increasingly protracted, this brings new challenges for measuring the impact on public health. There is an urgent need for more research in this area to confirm the associations we found, and to help governments and health agencies reduce the burden of heart disease among civilians during and in the months and years following wars.”