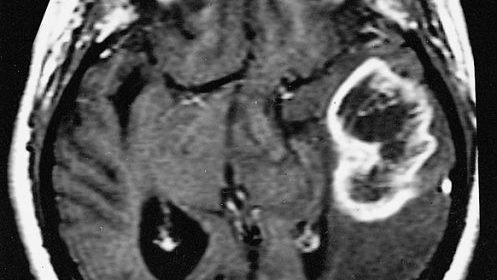 People diagnosed with the aggressive brain cancer glioblastoma face a grim prognosis. Half die within 14 months of diagnosis.

Even if initial treatment with surgery, radiation and chemotherapy is successful, such brain tumors typically recur, leaving patients with few options. Now, a research team at Washington University School of Medicine in St. Louis has found that laser treatment designed to destroy the tumor can add an average of two months to a patient’s life, compared with chemotherapy, the standard treatment for glioblastomas that have recurred. The increase is small but meaningful for people who have only months left to live.

“We’re not able to cure these types of really nefarious tumors, but we keep on working on finding new treatments that give people just a little more time,” said senior author Eric Leuthardt, MD, a professor of neurosurgery, of neuroscience, of biomedical engineering, and of mechanical engineering & applied science. “We’re nibbling away at this disease, step by step, and cumulatively these small advances can add up to a real improvement for patients.”

The study, published Aug. 22 in the journal Neurosurgery, gathered survival data by reviewing all laser treatments for glioblastoma from 2010 to 2016 at Siteman Cancer Center at Barnes-Jewish Hospital and Washington University School of Medicine. In that time, 54 patients received 58 laser treatments. Of those, 17 treatments were performed on inoperable tumors and 41 on tumors that had recurred after primary treatment.

Most people diagnosed with glioblastoma undergo surgery that involves removing part of the skull to cut out the tumor, followed by both chemotherapy and radiation. But the tumor inevitably comes back, and a repeat operation is considered too taxing for many patients.

“By the time patients present with a recurrence, they’ve already endured open brain surgery, radiation and chemotherapy,” Leuthardt said. “They are more fragile than they were the first time around, and their wounds may not tolerate reoperation well. It can take four to eight weeks to recover from brain surgery. It’s a lot to put them through again.”

In addition, some tumors are located deep in the brain and cannot be removed surgically without risking serious brain damage.

Instead of surgery, doctors treat recurrent or inoperable tumors with chemotherapy or a heat therapy known as laser interstitial thermal therapy (LITT). Neurosurgeons drill a tiny hole in the skull and insert a laser, guiding it through the brain to the tumor on a path designed to cause the least damage. Once inside the tumor, the laser emits pulses of heat that kill the surrounding tumor cells.

Leuthardt and first author and neurosurgery resident Ashwin Kamath, MD, found that patients with recurrent disease lived an average of 11.5 months after receiving laser therapy. Other studies have found that treatment with the chemotherapy drugs bevacizumab or temozolomide typically buys glioblastoma patients about nine months.

In addition, most people who received laser therapy were able to leave the hospital within a day or two.