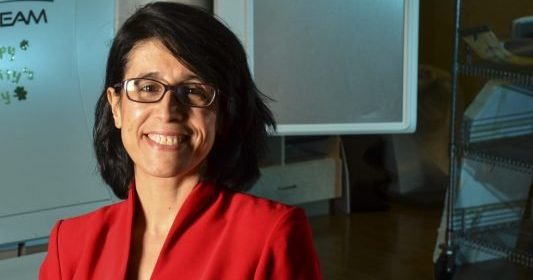 Anaplastic thyroid cancer is almost uniformly fatal, with an average lifespan of about 5 months after diagnosis. And standard treatment for the condition includes 7 weeks of radiation, often along with chemotherapy.

“We put patients through toxic treatment for seven weeks when most will only live five months. I’m not sure that’s how I would want to spend my time,” says Sana Karam, MD, Ph.D., investigator at the University of Colorado Cancer Center and assistant professor in the CU School of Medicine Department of Radiation Oncology.

Now a paper published in the journal Thyroid suggests an alternative. Rather than conventional radiotherapy, the paper suggests that thyroid tumors may be more susceptible to treatment with precisely targeted radiation known as stereotactic body radiation therapy (SBRT), and possibly with fewer side effects.

The study was made possible by one of Karam’s patients.

“It was one of those journeys that reminds you why we are so fortunate to be physicians,” Karam says. The patient was only 50 years old at the time of diagnosis. “I treated him with six or seven weeks of radiation only to find that the cancer had already progressed elsewhere in his body. He had six kids, five of them adopted, and at the end of his life one of the only things he could enjoy eating was ice cream, and so they all enjoyed it together.”

After her patient passed, the family created a fundraiser called Cream Cancer that accepted small donations from ice cream parlors near where they lived. Eventually the family raised $10,000, which they donated to the Karam lab to fund research to improve treatments for future thyroid cancer patients.

“My biggest thing was seeing if we could replace seven weeks of radiation with a shorter regimen, say three sessions of targeted radiation instead of thirty of conventional radiation,” Karam says.

Karam wondered if targeted radiation might succeed where conventional radiation failed. In collaboration with the lab of CU researchers Rebecca Schweppe, Ph.D., and Nikita Pozdeyev, MD, Karam tested these two radiation strategies in mouse models of the disease.

“What we found is that not only is this condensed regimen of targeted radiation equivalent to conventional radiation therapy, but it’s actually superior, not only in terms of local control but also distantly,” Karam says.

Karam’s last point is an important one. A common criticism of targeted radiation is the idea that while it may treat the deposits of cancer at which it is aimed, it may not treat invisible deposits of cancer elsewhere in the body—invisible deposits that might be irradiated as a byproduct of more system-wide, conventional radiation therapy. However, recent work in the Karam lab and elsewhere shows that focused radiation may have a systemic effect.

The work also found a genetic signature of cancers that resist radiotherapy, namely hyper-activation of the gene CXCR4, which is associated with inflammation and has been shown to aid tumor growth in models of other cancer types.

“Because of our patients who are willing to contribute their tumor tissue to create the cell lines we need for our experiments, and because of our expertise with animal models, Colorado is known to be one of the best places for thyroid cancer research,” Karam says.