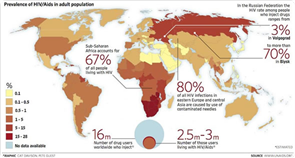 HIV/AIDS is a relatively newly discovered illness. Other infections like malaria, plague, leprosy, tuberculosis, measles and cholera have affected vast majorities of humanity over centuries. 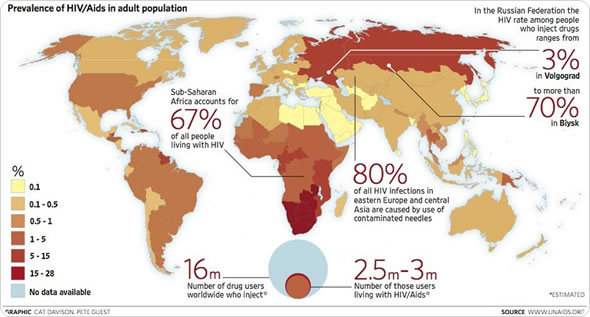 HIV emerged in the late 20th century. The chronological history of HIV/AIDS can be outlined as follows.

These are known as the “silent” decades as it is likely that HIV originated sometime during the 1960s but was unknown or not reported. The spread started in 1970’s when the medical community became aware.

HIV is thought to originate in Africa, where humans caught it from chimpanzees. The virus that affects the apes is very similar to HIV and is called SIVcpz (simian immunodeficiency virus). This virus spread to humans following contact with infected chimpanzee blood during the hunting of chimpanzees.

For many years the human type of HIV was limited to a remote part of Africa. With improved connections the virus began to spread worldwide.

This year was important since there were reported clusters or increased incidences of two conditions, Kaposi’s sarcoma (a type of cancer) and Pneumocystis carinii (now known as Pneumocystis jiroveci) pneumonia (PCP) in New York and California.

These conditions usually affect old or those with weak immune system. In this instance several young, otherwise healthy young men developed these conditions. Initially it was thought to be a disease related to the gay lifestyle as the men were gay.

More speculations regarding associations with cytomegalovirus or use of a recreational drug called amyl nitrate (“poppers”) were also put forth.

Cases in intravenous drug users showed it to be a problem not confined to gay men.

This year the disease was given several names such as lymphadenopathy (as it caused swelling of lymph glands), gay compromise syndrome and for the popular press, “gay plague”. However, many of the patients were haemophiliacs.

In July this year the disease was internationally named 'acquired immune deficiency syndrome' (AIDS) or in French and Spanish, SIDA.

Other factors such as blood transfusion related or pregnancy related transmission were noted. Support groups for AIDS patients like Terrence Higgins Trust began.

In 1983, there were reports of HIV in females suggesting sexual transmission. The issue of AIDS was taken up by the World Health Organisation (WHO). A similar associated virus was reported in France and termed LAV (lymphadenopathy-associated virus).

In the US a virus related to AIDS was isolated and termed HTLV-3 (Human T-cell lymphotropic virus 3). The condition in Africa worsened.

LAV and HTLV-3 were shown to be the same virus in 1985. In the same year an antibody test was developed to show if someone has the virus.

Public awareness continued to rise and the first case of breast milk transmission was reported.

1986 also saw the development of first anti-HIV drugs called azidothymidine (AZT) or zidovudine. The drug was approved in 1987. Princess Diana dispelled fears of AIDS by visiting and shaking hands with an AIDS patient.

1988 marked December 1st, the first World AIDS day and in 1989 effectiveness of zidovudine in clinical trials was seen. Dideoxyinosine (ddI) was the second drug developed.

1993 saw first resistance to Zidovudine by the HIV.

In 1994 it was noted that Zidovudine could reduce risk of transmission of virus from HIV positive mother to baby.

In 1995 world total of 1 million reported cases of AIDS and estimated total of 18 million HIV+ adults and 1.5 million HIV+ children were reported and AIDS became the main cause of death in 25-44 age group in USA. In 1995 a new type of drug is approved called saquinivir, a protease enzyme inhibitor. Estimate of global death toll from AIDS was 9 million.

In 1996 Nevirapine was approved for HIV. In 1997 it was estimated that 40 million people would be HIV positive worldwide by 2000. In 1998 side effects of combination therapy surface. AIDS was declared 4th biggest global cause of death in 1999.

In 2000, 34.3 million cases of HIV worldwide, with largest number in South Africa, were estimated. HIV Vaccine trials began in Oxford in 2000.

In 2003 in Swaziland and Botswana in Southern Africa, almost 40% of adults HIV+ AIDS vaccine failed. Enfuviride a new drug called fusion inhibitor was approved in the USA.