Leprosy is a chronic granulomatous infection. It is caused by the slow-growing organism Mycobacterium leprae, which is an obligate intracellular parasite. It affects chiefly the skin and peripheral nerves.

Leprosy has a wide range of clinical manifestations, which depend upon the host immune response more than the virulence or multiplication rate of the bacillus. It has a long incubation period, from two to seven years, ranging between six months and 20 years. Seropositivity may occur months or years before a clinical diagnosis is made. 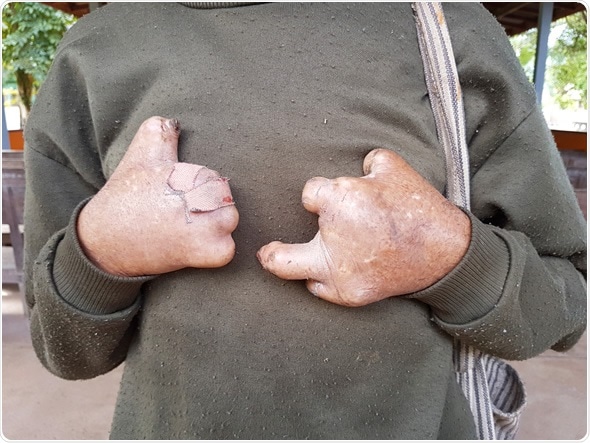 The typical manifestations of leprosy include:

LL patients have the following features:

This is the term used to describe unstable forms in which the clinical manifestations vary from time to time.

This refers to a phase in which the disease is not yet in any specific stage or type, such as a single lesion with slight loss of sensitivity and hypopigmentation, but no nerve thickening.

Leprosy reactions are changes in the leprous status as a result of altered balance between the host and the bacilli. They may occur before, during, or after treatment. They cause significant morbidity and permanent neurological disability.

This occurs as a delayed hypersensitivity event, usually in borderline forms. It reflects a heightened cellular immune response to the mycobacterial antigens. It may be a reversal reaction with improvement in clinical manifestations, or a degradation reaction with worsening of the disease features.

Treated patients become more tuberculoid in their manifestations, due to reduction in the number of bacilli. However, patients who are not on treatment exhibit increase in bacterial load, and the disease becomes lepromatous in form due to deteriorating cell-mediated immunity. In this case, typically the lesions become tender and erythematous, edema followed by scaling is observed, and ulceration may occur.

The appearance of systemic features depends on whether the individual is at the lepromatous end of the spectrum.

Also known as erythema nodosum leprosum (ENL), this reaction is the result of the body’s reaction to immune complexes deposited in the body, because of antigenic substances released by killed bacilli. It usually manifests as rapid and sudden deterioration in the clinical status during treatment of an individual with lepromatous leprosy or sometimes borderline lepromatous forms.

It is associated with the occurrence of symmetric nodules or target lesions, with systemic features such as fever, bone and muscle pain, and lymphadenopathy. More serious manifestations may include hepatitis or renal disease, and neural inflammation.

Parameters of inflammation are positive on testing. Necrotic forms of ENL show blocked vessels because of vasculitis following immune complex deposition in the vessel wall.

This is a classic sign of Lucio’s leprosy and classic lepromatous leprosy. Blood vessels are obliterated by proliferating M. leprae in the capillary endothelium, which promote vascular endothelial overgrowth, clot formation, and finally occlusion of the lumen.