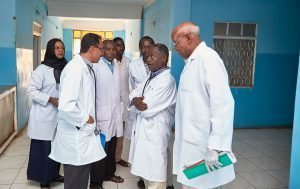 A new study to find a safer, efficacious and more patient-friendly treatment and improved diagnostic tools for people living with visceral leishmaniasis (VL) has begun in eastern Africa, within the new Afri-KA-DIA Consortium with funding from The European & Developing Countries Clinical Trials Partnership (EDCTP). The large-scale Phase III clinical trial seeks to assess the efficacy and safety of a combination of miltefosine and paromomycin in treating VL in eastern Africa.

VL is a neglected tropical disease spread by the bite of an infected female sand-fly. There are up to 90,000 new cases of VL every year worldwide. Fatal if left untreated, currently its highest burden is in eastern Africa (Eritrea, Ethiopia, Kenya, Somalia, South Sudan, Sudan and Uganda) where most people affected live in remote areas far from health facilities. Children are particularly vulnerable.

Today’s first-line treatment in the region – consisting of paromomycin, an injectable treatment used in combination with sodium stibogluconate, which is administered either through injection or intravenously – was shown to be effective following a clinical trial carried out by the Leishmaniasis East Africa Platform (LEAP), Drugs for Neglected Disease initiative (DNDi) and other partners in 2010. However, this treatment remains sub-optimal, as patients may suffer from rare but heavy side effects, such as cardiotoxicity, hepatotoxicity, and pancreatitis, and is difficult to administer since patients must endure two painful injections every day for 17 days. If found to be efficacious, the introduction of miltefosine (the first oral treatment registered for VL in 2002 in India and used in the VL Elimination Program in 2005 in India, Bangladesh, and Nepal) in combination with paromomycin will reduce the difficulty in treatment administration and lengthy hospital stays for patients.

“Despite an improvement in the treatment of VL, there is an urgent need for alternative new combination treatments that are efficacious, safe, of short duration, affordable, and suited for remote areas in eastern Africa,” said Dr Jorge Alvar, Project Coordinator, Afri-KA-DIA Project. “The combination of miltefosine and paromomycin has shown to be very successful in South Asia. We now need to adapt and test it in this region, as it would be a good option to replace the antimonial-based treatments.”

The study will run hand-in-hand with an assessment of innovative non-invasive diagnostic tools in managing VL cases within routine patient care. Countries in the region such as Kenya still use splenic aspirate for diagnosis – an invasive diagnostic technology which is dangerous if performed incorrectly.

“This package of care combining oral treatment and a specific diagnostic tool for primary VL could potentially improve overall case management in eastern Africa and be the cornerstone of successful control and elimination approaches for national programmes in the region,” said Dr Monique Wasunna, Director, DNDi Africa.

The clinical trial will be conducted under the umbrella of the new Afri-KA-DIA Consortium composed of ten academic and research partners who have conducted innovative VL clinical trials in eastern Africa over the past 12 years. The trial is being implemented under LEAP, a research and training platform dedicated to conducting trials in leishmaniasis, coordinated by DNDi‘s regional office in Kenya with members drawn from Ethiopia, Kenya, Sudan, and Uganda.

“I am very excited as the current Chairperson of the LEAP platform that we are participating in this important study under the Afri-KA-DIA consortium. Through such partnerships, we hope to find the best treatment for VL patients,” said Prof. Asrat Hailu, Addis Ababa University.