The BuzzFeed video, “Bacon lovers meet baby pigs” is amusing to watch. With 14,493,383 views, you may have seen it. It depicts several young men and women waiting blissfully to be delivered a plate of mouthwatering bacon, only to be handed instead a cute baby pig. Gasp!

The participants react with high-pitched squeals of glee as they embrace a piglet, before looks of bemusement emerge in the realisation that their love for bacon and affection for the piglet [don’t mix]. One woman exclaims, “I’m never going to have bacon ever again.” A male respondent jokes, “I mean, he does look delicious, let’s be honest.”

The video is entertaining. But it also reflects a subtle truth about the relationship men and women have to meat: the two sexes often differently resolve the tension caused when thinking about the slaughter of animals.

Of meat and men

Many studies show that men tend to enjoy meat more than women, and consume it more. For example, a 2014 Faunalytics study found that females disproportionately outnumbered men among both current (74%) and former (69%) vegetarians and vegans in the US. Women are more likely than men to reject meat for reasons related to its appearance, taste, health, weight loss, environmental concerns, and animal welfare. Men, by contrast, identify a lot with meat, perhaps because of historical associations between meat and masculinity.

Women who do eat meat often use somewhat different strategies than men to avoid guilt over eating animals. The psychologist Hank Rothgerber has shown for example that men, as a group, tend to endorse human domination beliefs and pro-meat justifications for the slaughter of farmed animals. That is, they’re more likely to agree with statements like, “humans are at the top of the food chain and meant to eat animals”, or “meat tastes too good to worry about what all the critics say”. In one study based on a 1-9 scale of agreement, where nine meant “strongly agree,” men averaged almost six compared to around 4.5 for women on measures of pro-meat and hierarchical justifications. These pro-meat beliefs help neutralise any notion that eating meat is problematic.

Rothgerber found that women on the other hand are more likely to engage in less overt strategies to reduce the cognitive dissonance, such as avoiding thoughts about the suffering of animals when eating meat (on the same scale of agreement, where nine meant they strongly try to avoid such thoughts, women average around nine while men register 5.5). These indirect strategies are useful, but they are more fragile. When confronted with the reality of animal slaughter (perhaps through sympathetic movies such as Earthlings or Okja) it may be more difficult for women to avoid sympathising with the animals they find on their plates. 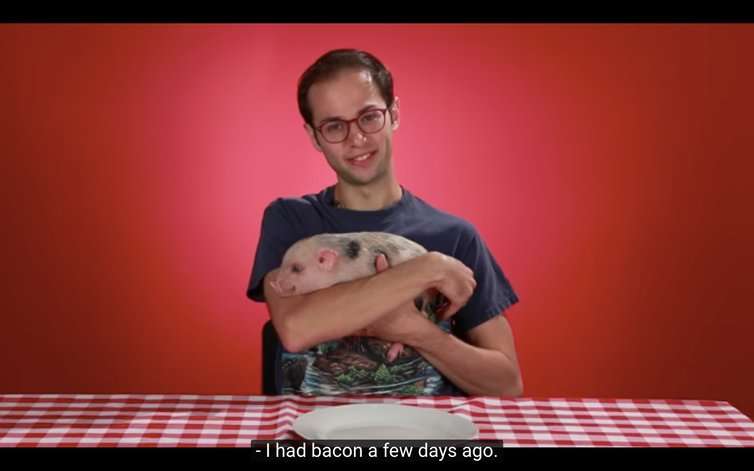 Women’s sympathies towards animals are on sharp display when contrasting men and women’s responses to baby animals. Baby animals, like human babies, are particularly vulnerable and dependent on the care of their parents for survival. They also display stereotypically “cute” features – large head, round face, large eyes and chubby cheeks – that we associate with human infants, what ethologist Konrad Lorenz termed Kindchenschema, or “baby schema”.

Because of their mixed opinions about meat, and women’s emotional attunement to baby features, my colleagues Neil McLatchie, Cecilie Olesen and I wondered whether women might find meat particularly distasteful when it comes from a baby animal. Might women show greater tenderness towards a piglet than their adult counterpart, an adult pig? And might this lead women to reject meat, even when the end product looks the same for both animals? We wondered the same about men, but we did not expect them to show much movement in their appetite towards meat on account of their more positive relationship with meat.

Across three studies, we presented 781 American men and women with either images of baby animals – from baby cows and kangaroos to baby pigs and lambs – or their adult counterparts. We paired the animal images with a meat dish (the precise dish varied between studies). In each study, the meat product was always the same image regardless of whether the animal was an adult or baby. Participants rated their appetite for the dish on a 0-100 scale (from Not at all to Extremely appetising) and made ratings of how cute the animal was or how tender it made them feel.

Women consistently found the meat dish less appetising when it came from a baby animal than when from an adult. Looking across the three studies, they tended to rate the meat dish on average 14 points less appetising on the 0-100 scale. This was partly explained by their greater feelings of tenderness towards the baby animal. Results for men were less conclusive. Their appetite for the dish was largely unaffected by the “babyness” of the animal (across the studies, on average, about four points less appetising when it was a baby).

Interestingly, we observed these gender differences despite establishing beforehand that both men and women rated baby farm animals (chicks, piglets, calves, lambs) as highly worthy of their moral concern. Men seemed better able to separate their appraisals of baby animals from their appetite for meat.

Of course, our studies did not investigate whether men and women went on to reduce their meat consumption, as we did not follow them into their homes or kitchens. What our research does suggest is that appeals to care-taking emotions, which are so important for how we treat members of our own species, might be beneficial for getting people to rethink their relationship to meat. This seems especially true for women.