Diabetes has become a leading cause of morbidity and mortality and the prevention and management of diabetes is now a major global health concern.

While recent studies link obesity with diabetes, there is an increase in focus on the functions of adipocytes beyond fat storage. Pro-inflammatory secretory proteins derived from adipocytes throw some light on the relationship between obesity and insulin resistance / type 2 diabetes and cardiovascular diseases.

Adiponectin is a peptide hormone secreted by the adipocytes. Other cells such as skeletal and cardiac myocytes as well as endothelial cells also produce adiponectin. This hormone plays a key role in insulin resistance, type 2 diabetes, and heart disease. The effects of adiponectin are regulated by two adiponectin receptors – AdipoR1 and AdipoR2. Adiponectin acts directly on the skeletal muscle, liver, and the vasculature. 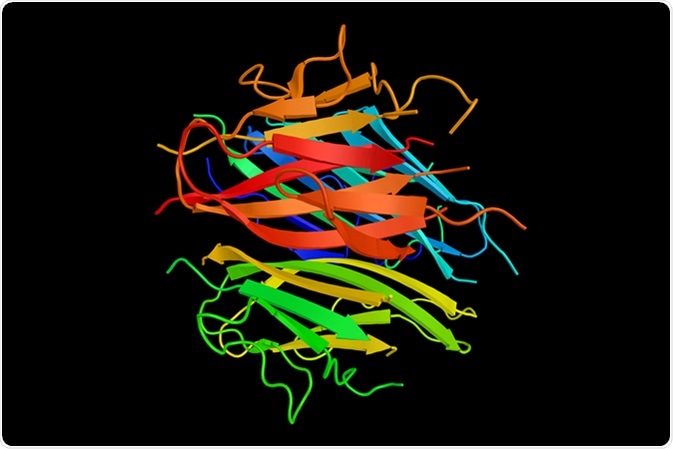 The insulin-sensitizing action of adiponectin is primarily due to the decreased hepatic gluconeogenesis and increases glucose transport in the muscle. Secondary factors include higher energy consumption and oxidation of fatty acids in peripheral tissues in order to boost the production of ATP.

Another potential reason behind adiponectin’s glucose lowering effect is improved secretion of insulin. It has been shown to counteract fatty acid– and cytokine-induced β-cell dysfunction. Several small scale studies report an inverse association between adiponectin and inflammation markers. Hence, low levels of adiponectin could predict the development of diabetes, at least in the case of non-smoking subjects.

Adiponectin is a multimeric protein weighing 30 kDa. Human adiponectin has 244 amino acids and mouse adiponectin has 247 amino acids. Post-translational modifications including hydroxylation and glycosylation of several lysine residues in the collagenous domain of adiponectin have been found to be crucial for the formation of high molecular weight oligomeric adiponectin. This is a major bioactive isoform of adiponectin that helps in its insulin-sensitizing and cardio-protective effects.

An adiponectin receptor-binding protein called APPL1 acts as a mediator in the signaling pathway where adiponectin interacts with insulin. The protein directly interacts with insulin receptor substrates. Studies suggest that APPL1 activates AMP activated protein kinase (AMPK), which is an important step in mediating adiponectin’s effects at the cellular level. Activated AMPK is involved in the production of nitric oxide which in turn results in vasodilation. AMPK activation also inhibits IKK/NFκB/PTEN triggered apoptosis.

Research on Adiponectin and Insulin Resistance

Ever since decrease in blood levels of adiponectin has been shown to be associated with obesity and insulin resistance, adiponectin has garnered significant scientific interest, and extensive research has been carried out in both animal and human models. Many studies show that administration of adiponectin in rodents as well as humans has anti-inflammatory and insulin-sensitizing effects. In some settings, it was also shown to be linked to weight loss. Hence, adiponectin replacement therapy may have potential benefits in the treatment of diabetes, obesity, and atherosclerosis in human beings.

A case-cohort study focused on the ∼9-year Atherosclerosis Risk in Communities (ARIC) study of 10,275 middle-aged, African-American and White subjects, measured plasma adiponectin in 581 case subjects with incident diabetes and 572 non-case subjects. The study concluded that in the US adult participants, high levels of adiponectin were linked to a low incidence of diabetes. The association did not differ much among men and women in both African Americans and Whites, but could not be established in smokers and those having a higher inflammation score.

Other epidemiologic studies also support this finding and have found a link between lower incidence of diabetes and greater levels of adiponectin in the body, though many of these studies lacked some important covariates and did not thoroughly probe the risk variability across BMI and smoking categories.

The association of insulin resistance with adiponectin supports the claim that diabesity (diabetes + obesity) is an inflammatory disease, though the underlying signaling processes are not yet sufficiently studied or understood. A greater understanding of these signaling molecules as well as their interaction is key for strategic prevention and treatment diabetes.

Evidence gathered from several experimental genetic and animal studies supports these findings. However, what is still not clear is, if decreased plasma adiponectin levels is the cause or the result of insulin resistance/diabetes. Scientists still need to find answers to many such questions before adiponectin can be confidently used as a therapeutic target.

Susha has a Bachelor of Science (B.Sc.) degree in Chemistry and Master of Science (M.Sc) degree in Biochemistry from the University of Calicut, India. She always had a keen interest in medical and health science. As part of her masters degree, she specialized in Biochemistry, with an emphasis on Microbiology, Physiology, Biotechnology, and Nutrition. In her spare time, she loves to cook up a storm in the kitchen with her super-messy baking experiments.