First discussed in medical literature in the 1800s, acute myeloid leukemia is a progressive and aggressive type of cancer affecting the white blood cells. 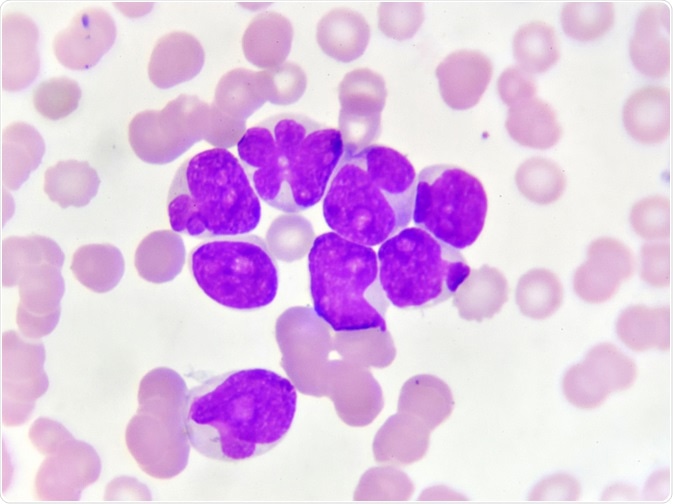 What is Acute Myeloid Leukemia?

Acute leukemia is an aggressive and progressive form of cancer that affects white blood cells. The condition can be further differentiated into two sub-types, which differ in the types of white blood cells affected.

Myeloid cells are a type of white blood cell responsible for protecting the body from parasites, reducing the prevalence of damage to tissue, and tackling bacterial infections. Lymphocytes primarily assist in fighting viral infections. Acute myeloid leukemia (AML) is the cancer of myeloid cells.

Signs and symptoms of AML include:

Symptoms typically develop quite rapidly over a short period of time; for some, this may occur over the course of a few weeks. As a progressive disease, symptom severity often increases over time.

The term leukemia is derived from the Greek words leukos and haima, which mean white and blood, respectively. In the mid-1800’s Rudolf Virchow, was the first to propose the word in more modern times, following the inspection of contaminated blood under a microscope.

The pathological and anatomical descriptions of leukemia were first discussed in medical literature in the early 1800s by Alfred-Armand-Louis-Marie Velpeau. Velpeau described the case of a 63-year-old florist who became ill with symptoms of weakness and the fever and the presence of urinary stones and the enlargement of the spleen and liver.

As a physician, Velpeau examined the patient’s spleen and noted that the blood was thicker than average with a porridge-like consistency. Upon inspection under a microscope, the consistency was suggested to be caused due to globules.

However, due to being unsure about the causes, Velpeau used the descriptive term leukemia in reference to the case. Furthermore, as there was no official medical named given to the ailment alongside a lack of rigorous evidence included in the publication, it is argued by some that John Hughes Bennett was the first to get leukemia recognized as a disease.

Recognition of leukemia as a clinical entity

Bennett, a pathologist at the Edinburgh Royal Infirmary, is often referred to as the person responsible for discovering leukemia due to his provision of complete and scientific descriptions. His discovery of the condition was made after performing an autopsy on a patient with reported abnormal blood consistency, which was later reported in the Edinburgh Medical and Surgical Journal in 1845.

However, it is argued that the symptomology described by Bennett better outlines the contemporary diagnosis of chronic granulocytic leukemia.

The discovery of acute Myeloid Leukemia

The clinical description of AML specifically is often credited to Wilhelm Ebstein. In 1889, Ebstein used “acute leukämie” to describe an illness that was characterized a fast and progressively. Arguably, this was the first time clinical differentiation was made between chronic and acute subtypes of the disease.

Similarly, the term “myeloid” was proposed by Neumann – the first to observe that the bone marrow synthesizes white blood cells.

Furthermore, the creation of the technique to examine bone marrow to officially diagnosis leukemia was first defined by Mosler in the late 1800s. Lastly, the malignant cell in acute myeloid leukemia, referred to as the myeloblast, was defined by Naegeli, who was responsible for the division of leukemia in two subtypes: lymphocytic and myeloid.

In 1976, efforts were made to classify the different types of AML officially. A French-American-British classification system was used to identify eight main types of AML, which differed due to the biochemistry and morphology features of the leukemia cells.

Building on this, and in light of the advances researchers made in regard to diagnosis and treatment, the World Health Organization produced a new system of classification, which was later revised in 2008.

The most recent revision made in 2016 features the inclusion of immunophenotyping, genetic information, and clinical presentation to create six subtypes of AML, which include: