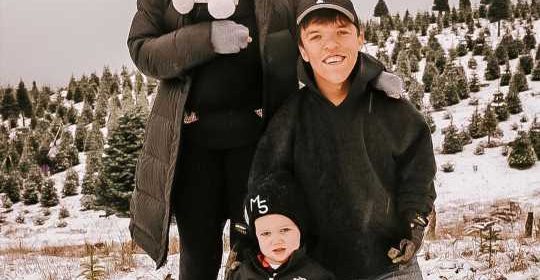 Zach Roloff and Tori Roloff are staying merry as they prepare to celebrate their first Christmas as a family of four.

On Sunday, the Little People, Big World couple — who just welcomed their second child, daughter Lilah Ray Roloff, on Nov. 19 — took their newborn girl and their 2½-year-old son Jackson Kyle out to buy their family Christmas tree in an excursion that presented its fair share of obstacles.

“BARELY survived getting our Christmas tree today,” Tori, 28, jokingly wrote on Instagram, captioning a photo of her family posing outdoors at the Christmas tree farm.

So what exactly went wrong? According to Tori, it started with the weather. “[We] did not dress for snow or rain,” she said, adding that she “couldn’t walk well in the snow.”

It all went downhill from there. When they ran into Santa Claus, Jackson ran in the opposite direction.

“Jackson wanted nothing to do with Santa Claus and almost gave himself a concussion trying to get away,” said Tori.

Luckily, Zach, 29, and Lilah stayed strong throughout. “Really the only one who held it together was Lilah girl (and dad),” Tori said.

All in all, she said she learned a “big parenting lesson.”

Never miss a story — sign up for PEOPLE’s free daily newsletter to stay up-to-date on the best of what PEOPLE has to offer, from juicy celebrity news to compelling human interest stories

PEOPLE exclusively reported the news that the Roloffs had welcomed their second child back in November.

“Zach and I are so excited to introduce you to our sweet baby girl Lilah,” Tori told PEOPLE. “She has been the perfect addition to our family!”

The couple first announced on Instagram that they were expecting their second child back in May, posting a photoshoot with Jackson — who like his father has achondroplasia, the most common form of dwarfism.

“Yay!! Tori and I are excited to announce that Jackson is going to be a big brother to a little sister!!” Zach captioned his post, which showed his son wearing a shirt reading “Big Brother.”

Tori made her own announcement, writing, “Zachary and I are so excited to announce that Jackson is going to be a big brother! We are expecting a sweet baby girl this November!”

Zach and Tori first met back in 2010 when she was working on the Roloff family farm, and the two married in 2015.

“A coworker told me, ‘Zachary really thinks you’re cute, but doesn’t think you’ll ever go out with him,’ ” Tori told PEOPLE after Jackson’s birth. “Our first date lasted five hours, and we’ve been together ever since.”

Tori had previously shut down rumors that she was pregnant with her second child last October, sharing a statement on Instagram that she was not expecting.

“If and when Zach and I are blessed with another little one we will share on our own time and in our own way. We love you guys and so appreciate your love and support,” she captioned her post. “No one wants to see baby J be a big brother more than I do but let’s wait patiently together!”