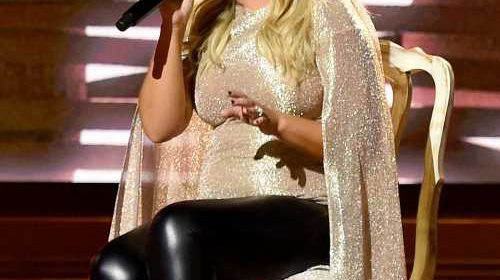 Gabby Barrett has that pregnancy glow.

While performing her hit No. 1 single "I Hope" at the 2020 Academy of Country Music Awards on Wednesday, the American Idol alum — who is expecting her first child, a baby girl, with husband Cade Foehner in late January — showed off her growing bump in a shimmering, gold top with a cape.

Barrett, 20, and Foehner, 24, confirmed their pregnancy exclusively to PEOPLE in August, saying that they're "very excited" for their new addition. Due early next year, Barrett said she first found out that she was pregnant in May.

"We were in Texas visiting Cade's side of his family," she said. "And it's funny, because I did not think that I was. Around lunchtime, I remember taking the test and my eyes nearly crossed! I was like, 'Wait, is that two lines?' I came running out to Cade and was just like, 'Oh my gosh, I think I am.' That's all that I said, and he knew what that meant. I started crying, and it was very sweet."

"The Good Ones" singer said Foehner's mom was in the room when she "came yelling down with the test" and his dad was out working in the yard.

"We called him and told him," she said. "Then we called and told my family. It was just a really happy time."

Ever since he and Barrett got married in October 2019 (after meeting during their respective runs on season 16 of Idol in 2018), Foehner said they've "talked and prayed" about having kids.

"Then, of course, with the pandemic happening, there was this huge amount of time of getting to think and rethink what life was going to be about," he said. "So we started trying pretty much at the start of the whole pandemic. It happened pretty quickly. We were expecting it to take a little while, and it seemed like the first try that it happened, so we were just so excited. We were blown away that it worked so quickly. But yes, we were starting to plan on it, for sure."

For Barrett, being pregnant amid the ongoing coronavirus pandemic has been "challenging in a way of it not being normally how it goes."

"I have to go to some appointments, unfortunately, without my husband, which is really sad," she said. "But I mean, if that's what keeps the baby safe, then that's what we're going to do. We've just been trying to find ways to really work with it, because that's all we can do at this point."

Barrett said otherwise, all has been good with her pregnancy so far, and she's finally "starting to understand the stereotypical pickle craving."

"I am very much into that salty-vinegar taste, that tart kind of bitter taste," she said. When they found out that they were expecting a daughter, the couple couldn't have been happier.

"I get to have two Gabbys!" Foehner said. "Ones not enough."

"One is enough," Barrett jokingly corrected. "We were really excited whether it was a boy or a girl. I always wanted a girl growing up, as well as a boy, so to have a girl first is just really exciting. I hope she gets his hair — definitely not mine."

As to what they think their parenting styles will be when their daughter, whose name they're going to keep under wraps until she's born, arrives, Foehner said it'll all be based in their Christian faith.

"[We're going to] create a culture of Jesus Christ around our kids and show how we are to live in accordance with his lordship over the Earth," he said. When life returns to normal post-pandemic and they're able to tour again, they're looking forward to having "a family rodeo in a tour bus."

"Me and Cade, we do everything together, and you'll see us both on the stage at the same time," Barrett said. "It's always been a dream to take our family out on the road and be able to do the job that we love, surrounded by family and having them experience everything."