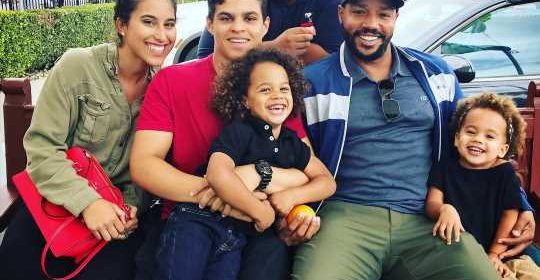 As a busy actor and dad to daughter Wilder Frances, 4, sons Rocco, 6, and Kobe, 17, twins Dade and Kaya, 20, and son Sean, 23, Donald Faison certainly has his hands full.

But the Emergence star admits he isn’t the master of doling out punishments when it comes to his six children — so much, in fact, that he has a specific nickname for himself that describes both his best and worst parental quality.

“I’m Disney Dad. I’m the one that you can count on for the laughs and the fun times,” says Faison, 45, in a new interview with PEOPLE’s Celeb Parents Get Real.

“I think that’s a horrible quality to have, as well,” he adds. “It’s rare that I discipline.”

“As my kids have gotten older, I’ve become … not more opinionated, but I feel like I’ve had to use my experiences in life to explain to them why what they’re doing isn’t going to work,” Faison continues. “But as far as being strict, no. And that’s good and bad.”

The Scrubs alum goes on to reveal that his proudest moment as a dad has been seeing his older children off to pursue higher education, sharing, “I have a kid that graduated college.”

“I’m very proud of that. And I have another kid that’s gonna start college next year,” the actor raves. “That makes me very proud.”

The Clueless Cast: Where Are They Now?

Despite how much he loves being a dad, Faison — who married the mother of his two youngest children, CaCee Cobb, in 2012 — misses “being able to go anywhere I wanted to go with my wife and not have to worry about a babysitter” before he had kids.

“Just, ‘Let’s go. What do you wanna do?’ ‘Let’s go, I don’t care, let’s go,’ ” the Clueless star recalls of their past conversations, joking, “Those days are over.”