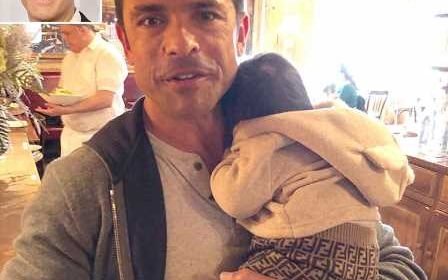 Andy Cohen is clearing the air over one special (and pricey) item in his 10-week-old son Benjamin Allen‘s wardrobe.

The Watch What Happens Live host stopped by Live with Kelly and Ryan on Monday to chat with Kelly Ripa about all things new fatherhood, where he addressed a photo he posted earlier this month of Ripa’s husband Mark Consuelos cuddling his baby boy — the latter of whom was wearing $400 Fendi pants.

“I didn’t know! I go to Baby Gap!” said Cohen, 50, in response to the numerous headlines that came out soon after that focused on the pants specifically.

So who was responsible for the extravagant gift? “They were from Denise Richards, from The [Real] Housewives of Beverly Hills! … As they should be, but I just want to go on record, I didn’t buy those pants,” said the new dad.

“I’m gonna send them to Kristin Chenoweth and see if she can fit in them,” Cohen joked.

While recalling her own time with Benjamin, Ripa — who’s already mom to Joaquin, 16, Lola, 19, and Michael, 21 — admitted that seeing the little baby made her want to have a fourth child with Consuelos, 48.

“I was putting it out there for [Mark] last night,” she admitted during Monday’s episode of her conversation with her husband. “He was like, ‘It’s all right. Let’s be grateful for what we have.’ “

“And then he put on Game of Thrones and fell asleep, which was the anti-aphrodisiac,” kidded Ripa, 48.

“He is causing women all over my life to start re-ovulating,” Cohen joked of his baby boy. “Kelly came over, her body was responding in ways — I was like, ‘Whoa!’ … I do have to calm the ladies down a little bit.”

Benjamin’s Fendi bottoms are just one unique item of clothing he has received from his dad’s famous pals. In late February, the Bravo host took to his Instagram Story to show off what may have been Benjamin’s most notable present to date: a pair of backless leather baby chaps.

“I’ve gotten a lot of baby gifts, you guys, but Christina Aguilera … look at this,” said Cohen in the first video, holding up the tiny pair of pants from the singer, who was a guest on his show the previous month. “She made chaps for the boy. Leather custom chaps, in the form of her ‘Dirrty’ video!”

The second clip (with the iconic song playing over it, of course) saw the camera pan to show off the sides of the chaps’ legs, which read “2019” and “COHEN” in sparkly red letters.

One final, adorably appropriate touch in Aguilera’s gift set was a collection of diapers with red labels reading — what else? — “Dirrty.”